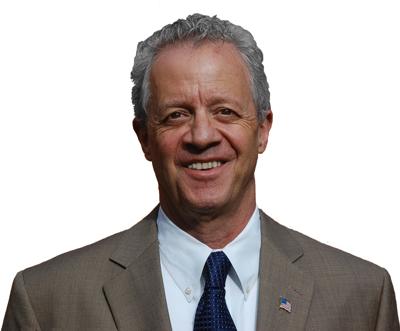 The gates have officially opened in the early sprint for the Teller County Commissioner 2020 races.

Due to term limits, Steen can’t seek this seat again. Mella is the first prominent Republican to announce his candidacy for this highly touted position. Other candidate announcements for this position could occur within the next few months.

Although the seat won’t be officially determined until Nov. 2020, the main contests are slated for the spring and summer of 2020 due to the predominance of the Republican Party in Teller County.

To date, no other Republicans have announced a challenge against Mella. In the other contested forthcoming commissioner seat, candidates Dan Williams and David Rusterholtz, who are both Republicans, have entered the battleground for the District 1 position, currently held by Marc Dettenrieder (who can’t run due to term limits.)

Mella, in his announcement, cited a renewed Civil War, with ties dating back to the themes echoed in Abraham Lincoln’s Gettysburg Address. “I am convinced we are in a new kind of civil war, an ideological and cultural war, and the outcome will determine whether our liberties will endure,” said Mella, during a short candidate announcement speech at the Big Tent event, hosted by the Teller County Republicans last Saturday.

Mella is a well-known local political figure who served on the Woodland Park City Council for close to seven years from 2002-2008, with four of those as the mayor pro tem.  And in more recent years, he served with the Woodland Park Planning Commission. And Mella nearly became the mayor of Woodland Park about five years ago, following the resignation of David Turley during a controversial appointment process. He lost to Neil Levy, based on the results of a chance draw, when the council was split on naming a successor.

In an interview last week with TMJ News, Mella stressed that he hopes to build onto the work done by former Teller commissioner Jim Ignatius and current commissioner Marc Dettenrieder in the area of forest management and wildfire mitigation. “There are opportunities,” said Mella. He believes in strengthening plans to do considerable more forest mitigation work and in defending against future wildfires and major disasters, with the collaboration of many organizations, homeowner groups and government agencies.

As for other key issues, he wants to serve as a key liaison to the Pikes Peak Area Council of Governments and play an advisory role in the arena of health care, an industry Mella is quite familiar with. He has worked extensively as a manager for key medical groups over the last few decades.

He also wants to get involved in key transportation issues, assuring that Teller has a front seat at the table in projects undertaken by the Colorado Department of Transportation.

The commissioner candidate, who has lived in Woodland Park with his wife Nancy for 21 years, describes himself as a hardcore fiscal conservative, and even a “constitutionalist.” During his stint on the Woodland Park City Council, Mella sometimes rubbed his peers and city officials the wrong way with these views, such as opposing awarding any funds to community nonprofits. He also raised questions about financial costs associated with the Aquatic Center project, a stand that clashed with other elected leaders.

Mella, though, strongly defended these positions, asserting that this is not the role of government.

But if he wins the seat as commissioner, Mella said he plans to be a “collegial, team player. I am a collaborator,” said the candidate.

Mella said he is happy with the current operations of the Teller County government, but sees “opportunities for improvements. I want to build on what we have done in the past.”

He cites the delivery of core services as critical.

If elected, Mella hopes to do what he can to increase the salaries of Teller law officers, without increasing taxes.  Mella supports a previous presented idea to use a certain amount of the projected increase in tax revenue from the huge hikes in property values to up sheriff deputy salaries. “We need to be competitive,” said the commissioner candidate.

However, he stopped short of citing a specific salary increase level, and conceded that Teller can’t compete with the compensation level of El Paso County.

But in a related issue, the candidate maintained he is a staunch supporter of the sheriff department’s campaign against illegal marijuana operations. Over the last two years, the sheriff’s office has mounted a huge assault against operators of mini-drug cartels and illegal cannabis grow businesses, with the theme, “Get out of Teller County.” Mella fully endorses this effort.

Moreover, he contends that Colorado and even Teller voters erred when supporting the legalization of recreational marijuana in 2014.

According to the candidate, the support of this measure was somewhat naïve and almost assumed that societies operate in a completely moral fashion. “It has been deleterious,” said Mella, in describing negative impacts of the recreational marijuana boom in Colorado and in counties in the region.

But in the new legal realm of recreational and medicinal marijuana, he wants to assure that this ‘Pandora’s box’ doesn’t get opened anymore. Mella said he would oppose any plans to further open this door by revisiting the county’s previous prohibition against retail marijuana.

“We have a challenging political environment in Denver,” said the candidate. Mella makes no pretentions that he espouses strong GOP views that clash with the current Democratic majority in the state House and Senate and governor’s office. This pro-Democratic trend is expected to increase even more statewide in the next year or two, according to political insiders.

Mella, though, cites infrastructure as one area where Republicans and Democrats can work together in Colorado.

Mella said he is looking forward to his upcoming campaign and listening to residents. He has been preparing for his run by attending regular meetings of the county commissioners for months.

“This is really the right opportunity for me personally,” concluded the candidate, who has retired from his management roles in health care. Moreover, he views the role as commissioner as a full-time position.

Politically, the rubber hits the mat next spring for the county commissioner candidates during the party caucuses in March, the assembly later that month, and then the primary in June.

In fact, under one scenario, the next county commissioner races could be determined by next March.