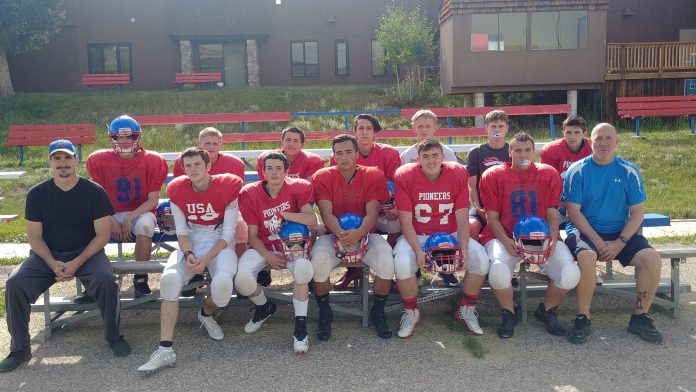 The Cripple Creek-Victor Pioneer boys up the mountain, who play on the six-man football team league, took to the field this month with a new weapon:  a renewed bout of high country enthusiasm.

And one trait quite noticeable in watching the Pioneer boys practice is that their team has grown from last year.

Plus, as the Panther boys grew in size from the 2018 season, the Pioneers have grown in numbers. According to Pioneer head coach Sebastien Benzi, the team reaped the benefits of several transfer students this year that joined their team, giving them some of the best roster numbers the pigskin squad has experienced in recent years.

Last year, the team only sported eight kids to play in their six-man football league. As a result, the last couple of years the Pioneer boys have been forced to play both offense and defense during all of their games. And then at the beginning of the season last year, the team got struck with injuries and during one game they only had five players to play six-man football. Ouch, almost sounds like the fate confronting the Colorado Rockies baseball team.

However, this year will be a different page in the Cripple Creek football storybook as the team now has 12  players ready to play in their 2019 football season. The team has a lot of freshmen players and the team’s roster also includes two-star senior players, plus a veteran quarterback.

Coach Benzi said that the increase in the team’s roster is the team’s number one strength this year. “The large thing is numbers,” Benzi said. “This year we will be able to substitute in and out more frequently and just find different positions for players that might be more suitable. Because, last year it was a lot of we only have one player that can play this position even though he would have been better somewhere else we didn’t have anyone else to play it. So this year we have more flexibility to play with where people are located.”

The coach is also confident in the players that are returning to play this year. “We have two good seniors that are good leaders with the team,” the head coach said. “We also have a good quarterback that is returning for his third year so that always helps.”

Two of the team’s star players, Jacob Walinski and Alex Best, were also excited about the growth in the number of Pioneer football players this year. Both players agreed that having a dozen players this season would help their team improve from previous seasons.

“For Cripple Creek it is really nice to have this many people going out for high school football,” fourth-year senior Pioneer running back and defensive end Jacob Walinski said. “Because last year during the first game of the year, we had five people out there at one point. And it is really exhausting when we are out there playing in 85 degree weather with five people playing six-man football with how much running there is. So as a team, to have more numbers, it really helps because this is new.”

The defensive end refrained from boasting of any personal assets. Instead, he believes there always are new goals to pursue. Waliski said recently he has been working on lateral quickness for making those open field tackles while he is playing defense. While on offense, the end said he wants to improve on reading the gaps and blocks better.

Third year senior center and defensive tackle Alex Best also agreed that having more people on the team will help. “Even though the freshmen are just coming up, we can help them learn” Best said. “Usually we didn’t have that, so we can have better teams for the next few years as well. It’s easier to play when you don’t have to play every single play of every single game.”

As for needed improvements, he cited also said efforts to become stronger trying to read the backfield better while on defense. He said that he wants to get better at making open field tackles because that is a huge asset when it comes to six-man football.

The Pioneers’ first game of the 2019 season takes place on the road at the Colorado Deaf and Blind School on August 29 at 4 p.m. The Pioneers then play their first home game against Hanover at 1 p.m. on September 7.

The coach and the players are both very optimistic that the team will do much better than their winless season last year. “The motto is to take each game as if it is the most important,” Coach Benzi said. “This year if we together as a team can just fundamentally get better, then we have a good chance of going .500. Every school loses and gains students so some of our competition has lost seniors, so that makes it easier for us to play with them. And with more numbers, the less winded and tired our players will be.”