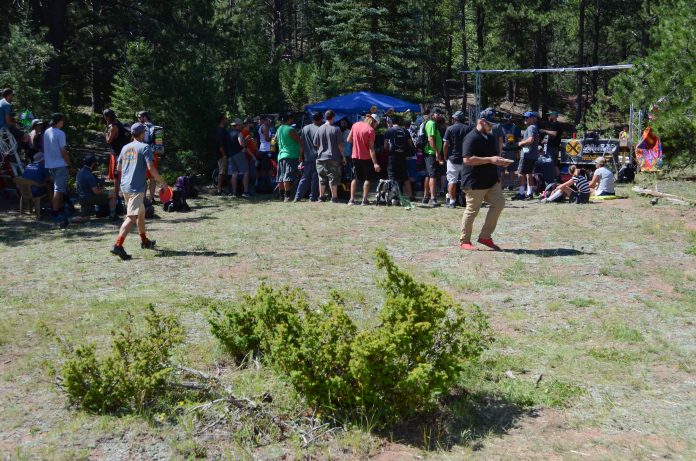 It was a weekend of not your usual links action at the Shining Mountain golf course in Woodland Park last Friday, Saturday, and Sunday.

The fourth annual Frizzen Disc Golf Tournament occurred on the disc courses at Shining Mountain. More than 50 participants showed up for this year’s event. 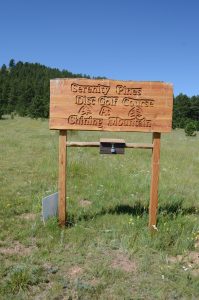 According to event organizer Raymond Carr, “People come here to play disc golf for fun and a little bit of money, and prizes, and have a good time.” Carr said, “What makes this course unique is it’s in the mountains. You’re in the woods. You’re definitely in the trees. It’s not a wide-open course.”

Many of the players camped out on the high bluff west of the main course. Carr stressed the point that this was a fun event. That said, it attracted some of disc golf’s more competitive and nationally ranked players.

A top disc golfer, who referred to himself as “Jamie,” came all the way from Winfield, Kansas to play. He explained that the tournament name “Frizzen” came from a disc golf tournament in Winfield, Kansas called “Octoberfrizz,” which has been going on for 22 years. Jamie was kicking back in a portable lounge chair when he spoke with TMJ News.

He said, “Honestly, this is like one of those tournaments that is not like super hard core competitive. It’s fun. People here, it’s kinda like a family.” This was Jamie’s third time playing the annual Frizzen tournament at Shining Mountain.

There was live music on Saturday night to entertain the players. The stage sat high on a hill overlooking Hwy. 67 and the main golf course. There were three bands scheduled to play. The duo Brothers Griffen played hard rock and progressive rock. Hiphop solo artist, Broken 812 played next, followed by Iggy Igloo. Igloo, a DJ from KRCC radio in Colorado Springs, played a variety of music from around the world.

Shining Mountain now sports three separate disc golf courses. They are Serenity in the Pines, Whispering Pines, and the course that follows the regular golfing course. Each course has 18 holes.

The Frizzen disc competitors played all three courses, one course each day.

Unfortunately, the results were not available at press time. Those interested in finding the results can obtain them at Frizzen’s Facebook page when they become available.