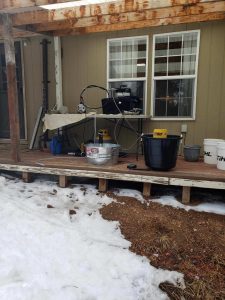 The Teller County Sheriff’s Office is continuing their staunch crackdown on illegal marijuana cultivation and distribution operations, as part of a campaign to get certain illicit drugs and cannabis concentrates off the black market.

A recent, highly publicized bust occurred when the sheriff’s office received a tip that there may be illegal activity taking place on a property north of Florissant in the Indian Creek subdivision.

After getting the information in the morning on Friday, March 22, deputies responded to the property located at 826 Chipeta Creek Trail later that afternoon. According to sheriff  authorities, once deputies arrived on the scene, they noticed “large totes containing processed marijuana and a butane hash oil lab on the back porch in plain view.”

The search was completed with help from DEA agents and the newly formed Teller County Narcotics Team. During the search, investigators found an operating butane extraction lab used to make THC concentrates or “shatter.” Along with the illegal manufacturing lab, the agents found equipment related to the operation including several boxes filled with cans of butane.

The search team also discovered more than 100 pounds of marijuana shake and trim used to manufacture the substance as well as over two pounds of the finished marijuana concentrate product. The authorities estimate that the street value of the “shatter” they confiscated alone is worth over $70,000 when sold over the black market.

Wilson, being the only person found at the residence, was placed under arrest and booked into the Teller County Jail. The suspect is being charged with offenses relating to marijuana and marijuana concentrates. He faces a class 1 drug felony, and a charge of extraction of marijuana concentrate which is a class 2 drug felony. Wilson is still being held in the jail in Divide with a bond set at $50,000, according to officials.

Due to the potential dangers illegal “hash oil labs” pose to the public, the local sheriff’s office takes all of these cases seriously and they search the properties using extreme caution. “The danger posed to the public from an operation such as this is very clear,” said Teller County Sheriff Commander Greg Couch.  “Making hash oil using flammable liquids is extremely dangerous and illegal.  It has resulted in explosions, severe burns, and death.”

This hash oil threat was stressed by Teller County Sheriff Jason Mikesell during a presentation last week before the county commissioners. He cited the possibility of explosions. 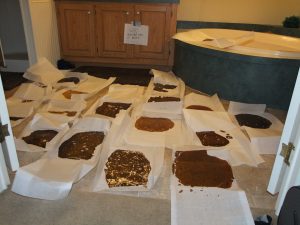 Luckily for Teller County, according to Couch, deputies have only busted three marijuana concentrate operations since they began their crackdown on illegal drug operations at the beginning of 2018. Couch said that they found one hash lab in 2018 and the recent bust marked the second operation they have foiled this year.

According to the commander, there have not been any incidents reported that relate to hash labs blowing up or setting on fire in Teller County to date. However, Couch believes that it is hard to say whether injuries related to the illegal activity have occurred in the area or not due to the fact that many injuries of this type get covered up and do not get reported to authorities.

“The problem is that since manufacturing marijuana concentrates is illegal, people who get injured during the process are not reporting it,” Couch said. “In most cases, we will not know if a fire was started inside a house used for making these concentrates unless the house completely burns down. Many of the victims of mishaps that occur during the process go directly to the hospital or burn centers without notifying authorities and lie about what happened to them.”

The commander did say that one of the houses they recently busted with a hash lab contained an area inside it that looked as if building materials had been burnt at one time during the illegal manufacturing process.