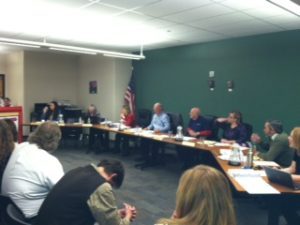 The initial try to oust several veteran members of the Cripple Creek/Victor RE-1 School Board has stopped well short of the finish line, according to officials from the Teller County Clerk and Recorder’s Office.

However, recall campaign organizers still have more time to collect autographs from registered voters in the district, or to correct signatures they have already collected.

But the group, headed by former district employee Patty Waddle, will have to hit the ground running in the next two weeks if they plan to force a vote. They face a final deadline of April 10 at 4:30 p.m., and must collect or correct 231 signatures, if they want a vote on removing three current board members. The designated cure period the recall group was permitted kicked off on March 27.

Teller County Clerk and Recorder Krystal Brown reported at last week’s commissioner’s meeting that the recall petition campaign against three veteran board members – President Tim Braun, Treasurer Dennis Jones, and Secretary Tonya Martin – was deemed insufficient. More specifically, the petition filed against Braun generated 338 valid signatures with 106 autographs getting rejected, falling short by 62 names. The anti-Jones petition received 328 valid autographs, with 119 getting canned, missing the desired mark by 72. And the campaign against Martin received 303 valid signatures with 120 rejected, falling shy by 97. The recall petition against each member has to meet a threshold of 400 signatures from registered voters in the district in order for a recall election to occur.

The recall effort, called “Erase the Board,” sought to remove the three incumbent members due to a number of allegations regarding violating state statutes, school board policies, open meeting and open record rules and a variety of resolutions. In addition, concerns have mounted about misappropriating funds and violating a bevy of rules.

This is the first recall campaign against the RE-1 School Board in recent memory. The campaign, though, has been on the radar since about 2016,  and even earlier, when tensions grew between parents and staff members and the district board and administration.

The recall plan started to gain more momentum when Waddle ran for a board seat in challenging Jones in the 2017 election, and only lost by 30 votes. Then, concerns were raised about Jones’ residency pertaining to his board representation.

“We had to focus on a grassroots effort,” said Waddle, when commenting on the group’s submittal of the recall petitions. “It took a community working together for a common cause.”

The gloves ready to come off

However, the targeted board members are not accepting the petition effort without a fight. In fact, if the petition group succeeds in forcing an election, Braun has vowed that “the gloves will come off” and the incumbent board members will conduct an aggressive counter campaign. He and other board leaders have accused the recall group of spreading lies and misinformation. The incumbent board members put together a 12-point “Stop the Lies” rebuttal, distributed throughout the district.

In a previous interview, Braun hinted that the targeted members have a variety of legal weapons at their disposal.

That point came to surface during a previous recall effort against a former city council member in Cripple Creek. An out-of-town judge told  recall organizers at the time that in Colorado a person can be recalled from an elected  board or council simply because of the color of their hair.

If a recall election moves forward, Brown is predicting that it most likely would occur in June or July. The estimated cost of such a vote is estimated at about $8,500.

Regardless of the outcome, the recall issue has been a hot topic for several years. In a recent “Best Of” Cripple Creek survey sponsored by TMJ News, the ongoing school board district fight was listed as the top controversy in the area.