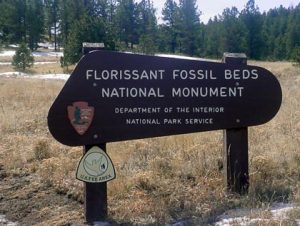 In the ongoing scrutiny of National Monument areas throughout the country, Acting U.S. Department of Interior Director David Berhardt has implemented an executive order, signed by President Trump, calling for the immediate seizure of all prehistoric fossils and displays at the Florissant Fossil Beds National Monument in Florissant.

“We need to value the assets at National Monuments throughout the country,” said Berhardt, in a press release that has raised more questions than answers.

According to the latest order, the Florissant Fossil Beds will remain open, but the park area will be stripped of all fossil remnants and related attractions, including rare 34 million-old plant and insect fossils, rare ancient petrified tree stumps and the 1800s Hornbek Homestead properties. The fossils and the park’s historic displays will be assessed of their cash worth, and could be auctioned off.

Although details are sketchy, the forthcoming federal seizure of the fossils is a direct byproduct of requests by the administration to obtain additional government funding for the payment of nearly $9 billion for the construction of the massive wall planned at the U.S./Mexican  border, part of the 2019 White House budget.

“Who needs prehistoric fossils, when we have a border crisis on a daily basis? I will see if some of my golfing buddies from New Jersey can pay prime dollars for these fossils. We may have them even displayed at the  White House,” Trump reportedly stated in a private cabinet meeting, according to a report in the Washington Post, when he learned about this invaluable asset in Florissant. “Rudy (Giuliani) and Chris Christie will handle all the details.” 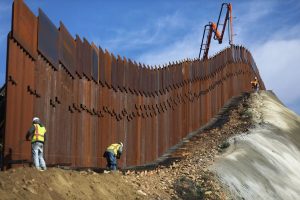 Trump, though, has denied that report, but members of his administration have confirmed that the fossil collections at the Fossil Beds will be confiscated, at least temporarily. “This is fake news. It sounds worse than something TMC would come up with,” blasted Trump, in a tweet released on April 1.

Congressional leaders, however, are confirming the bad news for the Fossil Beds, regarded as one of Teller’s prime tourist attractions. The Fossil Beds, which boasts of amazing fossil remains from geological periods stemming back 34 million years ago, attracts nearly 100,000 visitors a years, and has 15 miles of hiking trails.

“This is very unfortunate, but all government agencies must do their fair share in protecting our border. We hope to have the fossils, or similar remnants, returned at a future date,” said Congressman Doug Lamborn, who has fought not to have any funds taken from the region, especially from military installations to pay for the wall construction. “If our Democratic colleagues had been more cooperative in agreeing to the original plans for a border wall construction, we wouldn’t be in this predicament,” he added.

However, the news to seize the Florissant National Monument’s fossils has generated widespread opposition, even in Teller County, an area considered  a strong pro-Trump  anchor. A spree of environmental and historic groups, dressed in rare fossil costumes, will be conducting protests in Florissant, Denver and even Washington D.C this weekend.

The news comes during a tough period for the Florissant Fossil Beds, which actually became a National Monument in 1969 following action taken by the Congress and former President Richard Nixon. The Fossil Beds became a victim of the partial government shutdown earlier this year, when a budget deal could not be reached between Congress and President Trump. The Fossil Beds was shut down for about a month.

The Fossil Beds will still remain open for hiking, outdoor activities and educational programs. But no fossils will be on display.

The Fossil Beds is not the only National Monument to face strong scrutiny by the Trump administration and his appointed cabinet members. Former Interior Director Ryan Zinke, who resigned at the beginning of this year, gained quite a reputation for challenging and even reducing many acclaimed National Monument parks.

Besides the recent shutdown, the Fossil Beds was sparred the axe, but this track record apparently won’t last.