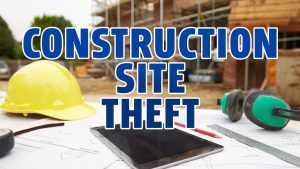 ~ by Bob Volpe ~
Last Friday, the Woodland Park Police Department displayed stolen items recovered in the bust of a theft ring that preyed on construction companies and private individuals.

The items were stolen from construction sites dating back to January 3, 2018.

The items recovered have been tied to at least seven cases in Woodland Park, unincorporated Teller County, and El Paso County. Police have picked up one person believed to be involved in the thefts, but the investigation is ongoing, and arrests are still pending. The search warrants were served at 846 Edge Hill Drive, in Woodland Park.

Woodland Park Police Commander Jim Halloran said the department has already returned about half of the items recovered to individuals who came in to identify their goods. He said the items already returned are valued at approximately $20,000. One of the high dollar items that was returned was one of the cargo trailers valued at several thousand dollars that was seized during the serving of the warrants, according to Halloran.

Halloran said, “Construction site theft is something that goes on quite often. The problem is it’s not always reported or it is reported in one jurisdiction but not in others and that is why we’re hoping you
can help us with that.”

Police are hoping that publicizing the remaining items will alert owners of the equipment to come forward to identify their personal property.

Halloran also stated that identifying the stolen goods helps t he police in prosecuting the case.

Halloran gave some tips on how to get your property returned in the event of a theft. He said, “The biggest thing is to know what you own, have a record of it (photos, serial numbers etc.) and mark items with your business name or initials.”

If you think some of these items are yours, you can contact officer Alex Circa, at the Woodland Park Police Department at  719-687-9262.