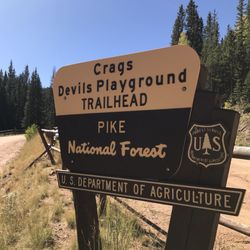 The sometimes tough road access to the Crags Campground near Divide has closed again, adding more bad news for thin-ski and snowshoe fanatics.

Due to heavy snowfall and the danger of being stuck in a ditch on Road 383 that leads to the Crags Campground, the Forest Service is installing a gate to prohibit would be adventurers from trying to get
to the popular parking area at the Crags.

This closure is deemed necessary because the snow covered road has often lead to those who would dare test their vehicles’ ability to navigate the deep snow, have wound up in the ditch that parallels the
road. The danger has led to the road being blocked for those trying to access or leave the area by cars and trucks being stuck.

There is no cell phone service in the area, and if stuck, people must hike out on foot to call for help. Just last week several cars slid off into the ditch creating havoc and much consternation among those
inconvenienced by the stranded vehicles.

Pike National Forest spokesman Gregg Goodland said, “ In the case of the Crags road, the district tries to strike a balance of providing access to the amenities up drainage and closing the road when the snow
becomes unmanageable.” 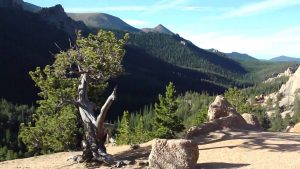 Last Friday, a plow was scheduled to clear the parking area by the Rocky Mountain Mennonite Camp’s cabin, just before Road 383. Though parking space is limited, visitors from this area can cross-country ski or snowshoe the road’s two miles to the trailhead. The gate will be lifted once the snow melts.

The Crags is one of Teller County’s premier snowshoeing, and cross country skiing destinations in the winter.

But in recent years, the road has been closed several times. In the spring of 2016, the forest service closed the road to remove dead beetle kill trees, which posed a hazard to the public by possibly falling down.

The original official statement from the forest service stated, “The Pikes Peak Ranger District of the Pike-San Isabel National Forest has temporarily closed the Crags area, including the Crags Campground and Forest Road 383, due to a large number of trees that pose a safety hazard to the public. U.S. Forest Service personnel have discovered hazardous trees in areas frequently used by visitors for camping. A spruce beetle infestation several years ago has left many of the shallow rooted spruce trees standing dead along Forest Road 383. The closure will last several weeks until the hazard trees can be cut from the campground and parking areas.”

The temporary closure was lifted in June of 2017, but only to hikers.

After removing some of the offending dead standing trees, the forest service reevaluated official use of the area. The official order stated, “To help ensure public safety, the Pikes Peak Ranger District has issued a Forest Order that prohibits dispersed (free) camping, campfires and parking along the FS Road 383.

“Camping is allowed only in the developed Crags Campground. There are 17 campsites available on a first come first serve basis for a fee of $16 per night. Dispersed (free) camping, campfires and parking are prohibited along either side of Forest Road 383, as a large number of hazard trees
still exist. Parking is allowed only at designated sites (Ring the Peak Trailheads, Crags Trailhead, and within the campground).”

Besides the falling tree hazard, the forest service was concerned with the proliferation of people camping along the roadway, creating unsafe campsites and possible fire danger.

The removal of dead standing timber is expected to last into the near future and the road may be closed again at any time to facilitate the completion of the task. With so many closures, many outdoor buffs are wondering about the future of the Crags area, which actually offers the shortest route to the top of Pikes Peak.