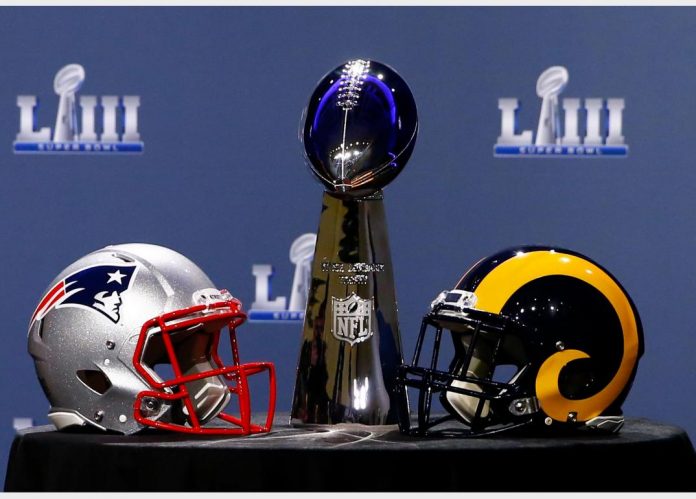 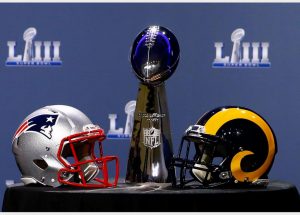 Super Bowl LIII could amount to the battle of youth vs. experience.

The lead up to the Super Bowl is always a mad affair. This year the hype, the controversy, the quarterback comparisons, and the, always amusing, prognostications by NFL talking heads will make your head spin.
This year’s Division Championship games were arguably the best the NFL has fielded in recent memory.

Both the AFC and NFC games went into overtime. It was the first time in NFL history that both conference title games both went to the extra period. 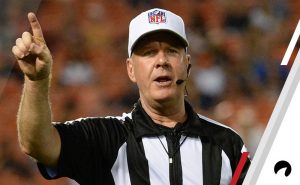 Both championship games were not without controversy. A no-call on an obvious pass interference call, that would have sealed the game for the New Orleans Saints, infuriated fans and the coin toss and
subsequent win by the Patriots in overtime against the Kansas City Chiefs, has the NFL scrambling to find a way to better decide how overtime in a championship game should be managed. Some are suggesting
that the current “sudden death” rule should be scrapped and replaced with a method more fair to the loser of the coin toss.

Anyway, the stage is set, there’s no going back. So, what are we looking for in this year’s big game.
Tom Brady is the consummate professional. This is Brady’s ninth Super Bowl appearance. He has won five and lost three. His most recent Super Bowl trip was last year, when he and the Patriots lost to the Philadelphia Eagles, 41-33.

Brady has led 12 game-winning drives for the Patriots in the postseason, which is double the next closest quarterback (John Elway).

Despite being known as a pocket quarterback, he also has six rushing touchdowns in his playoff career.

For the Rams, Jared Geoff is finding his groove. Geoff is one of the best young quarterbacks in the NFL. He started his career a little slow, but has matured greatly in the last two seasons.

This season Geoff has learned that managing a game is as important as throwing touchdown and interceptions. In his 30-22 playoff win over the Dallas Cowboys, Geoff threw no touchdowns and no interceptions, but managed to seal the win behind the running game of Todd Gurley and
C.J. Anderson.

In the NFC championship game against the Saints, We saw a version of Goff that resembled his regular-season self. It wasn’t exactly a prolific day for the third-year quarterback, but he completed 62.5
percent of his passes and nearly reached 300 passing yards. Both were close to his 2018 regular season averages of 64.9 percent and 293 yards. 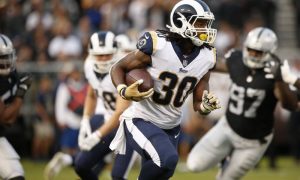 Look for a Running Assault
Both teams have a potent running attack. For Los Angeles, Todd Gurley was their breakout star throughout the regular season, but recently signed C.J. Anderson has picked up most of the reps while Gurley has been used less. It’s unclear if Gurley is battling an injury (he says
he’s not).

Meanwhile, rookie Sony Michel has emerged as a dynamic rusher for the Patriots and has helped ease the load for veteran James White.

Quarterback Tom Brady has been relying more and more on his running backs, especially with receiver Josh Gordon missing the postseason and tight end Rob Gronkowski not producing as much this year. 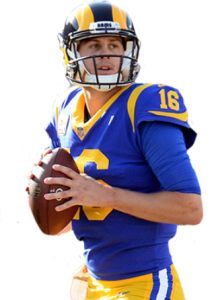 Fun Time In the Air
The Rams will need to air it out. The

Patriots’ run defense has completely shut down Melvin Gordon and Damien Williams in the last two
games, but their secondary has been exploitable for big plays down the field. There should be some deep-ball opportunities for Goff. If he can connect on a couple of big plays to Brandin Cooks,
the Rams’ offense should have no trouble putting up points.

The Patriots, on the other hand, spread the ball around in the passing game. Tight end Rob Gronkowski and Julian Edelman are Brady’s go-to guy on third down, and both are a deep threat as well. Phillip Dorsett and Chris Hogan are also prime targets for Brady.

Against the Chiefs, Brady struggled mightily in the passing game. 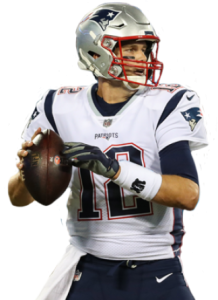 Brady was sacked once, but had a pass rusher in his face seemingly every time he dropped back to pass.

He finished with 126 passing yards, his lowest output since 2013.

Defensive Showdown
Here is were the rubber meets the road. The old adage that “defense wins championships” still applies, despite the current NFL trend toward high scoring offenses.

The Rams have, arguably, the best defensive player in the NFL, Defensive Tackle Aaron Donald. No team has been able to block Donald. He is a shoe-in for defensive player of the year. If the Patriots don’t double him all the time, he’ll be a game changer for the Rams.

With the likes of Defensive Tackle Ndamukong Suh, and Defensive End Dante Fowler rounding out the Rams defensive line, Brady may have all he can handle.

The Pats could play base defense, but that would leave them with poor match-ups in the passing game. They could match the Rams by playing nickel, but L.A.’s receivers are willing and capable blockers and
would have an advantage against a defensive lineup featuring five defensive backs.

The X factor, Head Coaching
This a  match-up of an old experienced master versus perhaps the most innovative young mind in NFL coaching.

When the chess game begins, neither of these guys is going to choke. In the end, Super Bowl LIII will be decided by which of these to two guys makes the least mistakes, or perhaps, and very likely, the last
team to have the ball.