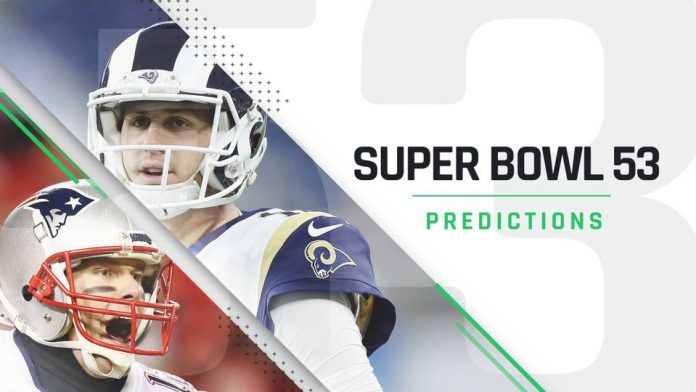 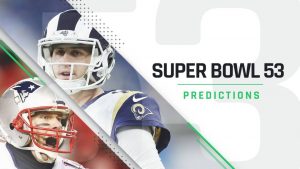 ~ by Rick Langenberg and Trevor Phipps ~

“Although I don’t like them, I am going with the Patriots by a score of 35-24.” More specifically Norm cites the super combination of Tom Brady and head coach Bill Belichick. Despite negative opinions about these legends, he contends you can’t argue with success. He says their experience under the Super Bowl gun will trump Rams coach Sean McVay, QB Jared Goff and company. “Brady is a tough bird.”  (Of course, if Norm hits the prediction on the money, he is demanding that the newly-acclaimed Democratic state lawmakers appropriate $5 million next year in road improvements for Teller County. Pressure is on there Dems.)

“The Rams will win by a score of 38-28.”  As a hardcore Pittsburgh Steelers fan and partial Denver Broncos fan, Steve maintains it is a violation of any form of civilized behavior and ethics to support the New England Patriots. In fact, such an act could amount to treason and a reason for a public hanging in some quarters of Steeler and Bronco-land. But as far as the actual game, here is what the Creek Marketing King is predicting: “Tom Brady will suffer a deli bating, arthritic affliction in the second quarter, but will remain in the game. The refs will ignore many obvious penalties (which should be called) against the Patriots because Bill Belichick will have the refs paid off. Despite these obstacles, the Rams will prevail and Brady will Finally, Finally be retired. We will organize a party for him.”  And as for other aspects of the Super Bowl 53, Kitzman notes, “The commercials will be mediocre this year and the halftime show (starring Maroon 5 and other top performers) will have no controversies, but will be mildly entertaining. And The Mountain Jackpot will get the scoop as they will send Rick Langenberg to Atlanta.” (Believe everything Steve says, you have seen one too many special events in Cripple Creek.)

“I hate to admit, but the Patriots will win by six. It really comes down to leadership and you just can’t beat Brady and Belichick. They are a hard act to follow. (What can you say, this is a status quo prediction from law enforcement).

The Rams will win by a score of 21-17. “I am a hardcore Cleveland guy and the old Rams were originally in Cleveland. A lot of people don’t remember that. So, I can’t root against the Rams.”   Plus, the Creek head boss contends there is a slight feeling of revenge among long-time Cleveland Browns fans. “We will never forgive Bill Belichick for (playing a role in) taking the Browns out of Cleveland.   (Yes, football fans, don’t mess with the old Brownies, who once stood outside the hotel John Elway was sleeping in to greet him with dog barks all-night long during a playoff game. And in Mark’s case, don’t mess with the Irish. If he’s right, Mark has vowed to play an Irish jig at the next city council meeting.)

“The Patriots will by a score of 31-24. Due to the LA Rams defeat of the Dallas Cowboys in round 2 of the playoffs, combined with my wife’s sexual crush on Tom Brady…the good doctor will be pulling for the Pats during the big game!  Brady is either like fine wine, or moldy cheese.  He is going to be better with age, or stink up the gridiron.  Regardless of the outcome, Brady has proven to be the best of all time at playing QB, and it would be nice to see him solid up that statement.   Go Pats!” (The Doctor is still suffering from Dallas Cowboy choke-itis in the playoffs. Remember, the Doc is used to an environment where if you don’t root for the Cowboys, you were kindly escorted out of the country.)

“Be still my beating heart.  It was merely fate that my man, Tom Brady, was able to return to the big game this year.  It was a short 17 years ago when Brady faced the Rams in their first super match up, and I fell in love.  This year, Tommy Boy will rein victorious once again, defeating the Rams 24-17.  Instead of going to Disney World, Tom is gonna need to come see me for his victory present!”

“The Rams will pull an upset and win by a score of 28-27. There has been all this Brady talk that everyone thinks the Patriots will win. But they will eat their words. It will be similar to last year’s victory by the Philadelphia Eagles.” (Watch out for the words of Democratic party organizers, there are in power right now and reeling from kicking Donald Trump’s behind in the government shutdown clash.)

“The Pats will win 35-14. I like New England; I think the experience is going to get it done.”

“I have to be a little skeptical of Joe’s (Theismann’s) prediction, especially when he said (previously) the Colts were going to demolish the Chiefs in the playoffs. As we know it was the other way around. So I see the Rams prevailing. They just have the better weapons in receivers and in CJ Anderson. 24-17 Rams.”

“The Patriots will win 45-42. Ugh… I, being a Broncos fan, it seems like you HAVE to hate the Patriots and I do. However, I recently read in the news where a fine ten year old boy named Ace Davis from Kentucky recently proved scientifically (with evidence) that Tom Brady is indeed a dirty cheatin’ SOB! Therefore, my prediction has to be based upon the fact that the Patriots have been proven to cheat and are quite good at it. An old saying goes, ‘if you are not cheating you are not trying, and if you get caught cheating you are trying too hard. Thus I think that by now, the Patriots have cheated so much to where they know that fine line between cheating and being successful and cheating and being caught. That being said, I think the Patriots will somehow cheat without anyone knowing it and thus come out ahead.”

“Both teams are going to run the ball until the other team stops them. Rams have the advantage in the run game. Whoever has the ball
last wins. Score will be 27-24”

“The Patriots will win by a score of 28-14, and that is being very conservative. The Patriots are going to kill the Rams.  The reason: It’s called Brady and their top receivers. As much as everyone doesn’t like Brady he is amazingly good. He looked spectacular in the playoff games.” (Warning to Ram fans, Jon has been one of the top predictors in past Super Bowl games for TMJ.)

Karen Murphy, Co-owner of the Historic Ute Inn and chairperson of the “We love New Englanders Foundation”

“The Patriots will win by 21 points. With Brady and the Patriots, there are no surprises. We win every year. What is there to even discuss.” Moreover, the personable restaurant owner contends this is just part of the winning institution for the Patriots. (Ram fans can still come to the Ute, but will face some humiliation, especially when Karen starts yelling in her strong New England accent, following a Brady touchdown drive.  If the game goes as some predict, they may be hiding under a table by the second quarter.)

“The Patriots will win by a score of 31-28. Growing up in New England, I was raised a Patriots fan. I LOVE the Broncos, but since they are not in it, I have to hope for the Pats to win. The Patriots have demonstrated themselves to be the most consistent team in football with an extremely wide range of skills on the team, a wide range of plays in the book, and a huge amount of spirit in the fight. They have the experience to hold up in the big game under all the hype and pressure, and Brady’s likely burning desire to go out on a high note. The Rams have the spirit, but fall short of the Pats in those other ways. For those reasons, I pick the Pats.” (Don’t argue with Tanner, unless you are former city manager David Buttery. But this is the Super Bowl, not Woodland Park politics, thank God. Somebody please kick me for bringing up WP politics.)

Other Short Assorted Predictions From A Variety of Experts and Locals

“The Patriots will win by a score of 34-27. I would love to see the Rams win, but I think it will be the Patriots. Maybe if they win another Super Bowl Bill Belichick and Tom Brady will retire!”

“The Patriots will win by a score of 31-24 have the experience to overcome the Rams’ offense. I think Brady and Bellichek have been there too many times to lose to a team that hasn’t been to a Super Bowl in who even knows how many years.”

“The Rams will win by a score of 34-27. The Rams have a powerful running back duo. They also have the ability to come back from behind. They can play a good offensive and defensive game. New England prepares for their games well, but the Rams have surprise capability.”

“The Patriots will win by 28-21. Tom Brady beat the Rams in his first Super Bowl so I think this will be his last and he will win.”

“The Patriots will win 27- 19. I’m gonna go with the Patriots because I hear everyone hates them.” (Hilary is on the WP City Council, a target of much historic hatred, so what can you expect.)

“The Rams will win 28-14. Los Angeles is cooler than New England.” (That may be the  most logical answer for a Rams victory, we have heard.)

“The Rams will win 20-17 because the Patriots have been to the Super Bowl too many times and because I think a new team will rise above and steal the trophy!”

“The Patriots will win 28- 21. The reason: Because I said so!” (Short answer, sound like something from a Bill Belichick interview.)

“The Rams will win 37- 34 It is nice to see once again that two teams that come from states that have legalized the recreational use of America’s favorite hippie grass made it to the Super Bowl. Is there a correlational between legal cannabis use and winning sports teams? Maybe, because this is at least the second time this phenomenon has occurred. I picked the Rams cuz I bet Cali has better way better weed than the East coast!”