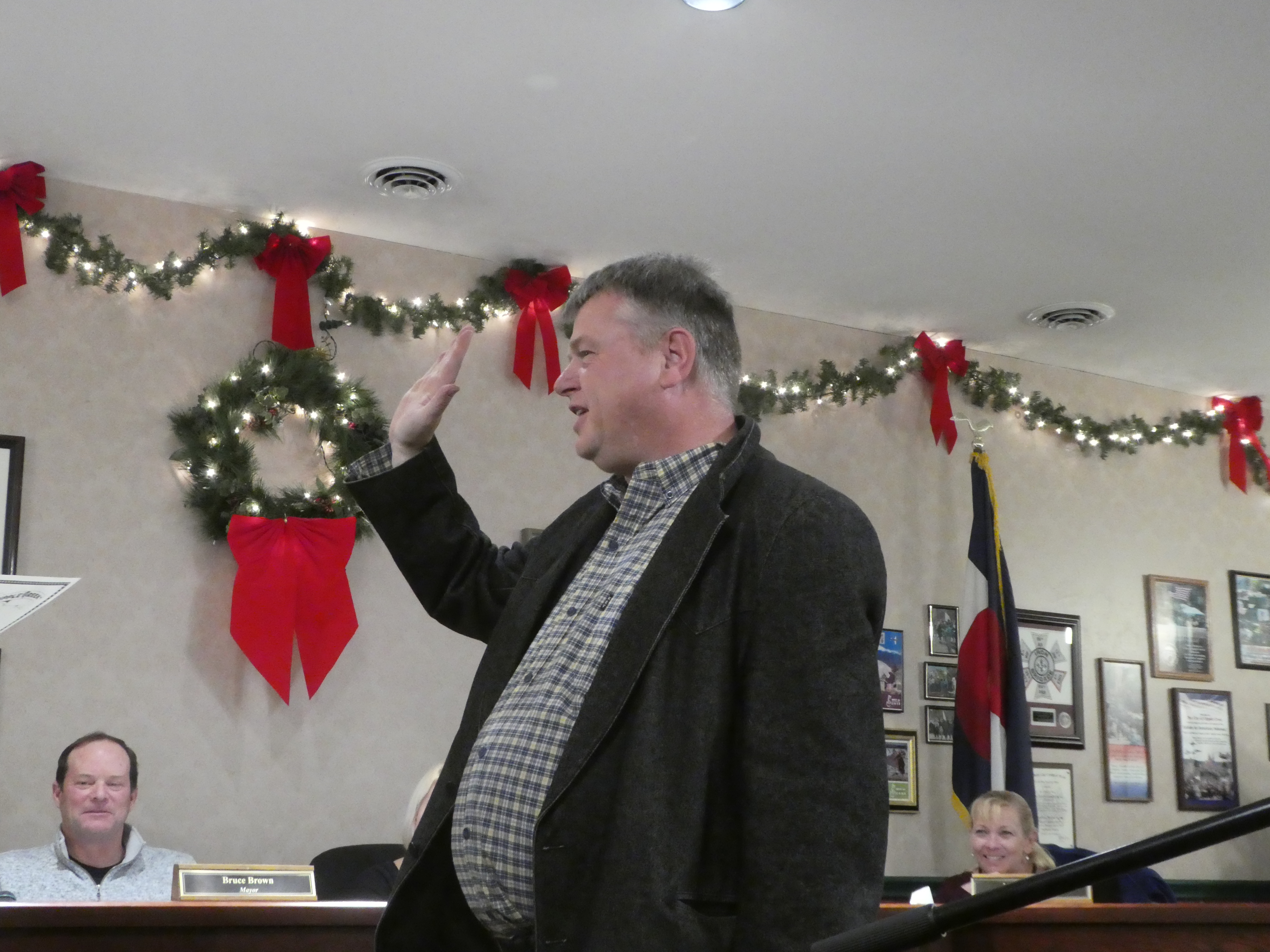 Local youth honored for saving a family from tragedy 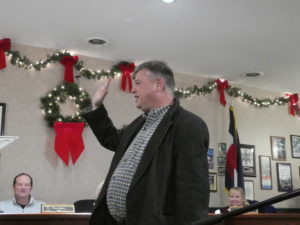 It was the contract, budget and swearing-in time for the Cripple Creek City Council last week in one of the quickest sessions of 2018.

It also was time for a few accolades, such as honoring a local youth for saving his family from a probable fire tragedy.

As expected, the council on Dec. 5 made it official by approving a contract for new city administrator Mark Campbell, who officially started working for the city on Monday.

Campbell, who hails from Norther Ireland and previously served as the top administrator for Kremmling, Colo., near Steamboat Springs, took the oath during a brief ceremony. He also introduced himself to the public and thanked the council for picking him for the position.

“Do we need an interpreter,” quipped Mayor Pro Tem Chris Hazlett, just prior to the swearing-in process.  Campbell sports a strong Northern Ireland accent and isn’t afraid to tell an Irish yarn or two or three for that matter (see related story). He has lived in the United States since the early 1990s, but grew up in Northern Ireland at the height of much of the conflict.

Besides his role as head administrator for Kremmling, Campbell manned the ropes for LaGrange, Missouri, which features full-scale gambling.

Campbell’s appointment marks the first time the city has had a permanent administrator since last summer, following the exit of Ray DuBois. As part of his contract, he will be paid an annual salary of approximately $105,000, according to city officials.

The appointment of Campbell was just one ceremony that marked last week’s short session.

With no delays, the council approved the city’s annual $11.6 million spending budget, with a general fund of about $8 million. Overall, the budget is similar to previous years, and includes a little more than $500,000 in spending from 2018.

With this budget, the city will incur a little more than $250,000 in deficit spending, an amount that will be taken out from their savings account. The city has struggled financially due to the decline in betting device revenue and must rely a lot more now on grants.

The budget does allow for a $2 per hour increase for members of the police department as part of the city’s commitment to public safety and security. This change was made during a recent budget hearing, but it doesn’t offer any more adjustments in the city’s fiscal bottom line.

The council also approved the city’s annual mill levy of 2.17 mills, one of the lowest residential tax levels in the state. Finance Director Paul Harris noted that the town’s total property tax revenue represents a staggering 1.1 percent of the money generated by the government. This is one of the main byproducts of limited stakes gaming.

Councilman Tom Litherland boasted that this represents an extremely lean taxation rate that rivals every community in the Pikes Peak region.

The only contract that the town couldn’t get completed last week dealt with a lease agreement with the Butte Theater Foundation. But attorney Erin Smith reported that both the council and Foundation have reached an agreement, but just need to finalize the language.

This will appear again on the next council meeting’s agenda.

In essence, this agreement calls for the city to pay the Foundation $280,000 for the production of seven shows next year. Out of this, the Foundation will repay the city $200,000; putting their net annual subsidy of about $80,000.

The Foundation, in turn, then contracts out shows with the current company, Mountain Rep Theatre.

One of the main goals for both entities is to make live theater at the Butte more self-sufficient financially. City officials and Foundation group representatives appear satisfied they are headed in the right direction. A show schedule for 2019 will be announced within the next few weeks. 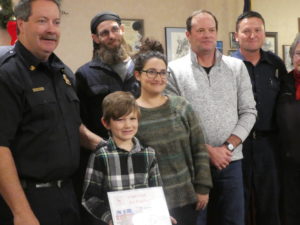 Last week’s meeting also featured an emotional award ceremony. Cripple Creek Fire Chief Dean O’Nale presented a special award to seven-year-old Logan Ruppel. Logan’s swift detection of a fire at their home in Cripple Creek probably saved the lives of his parents, Jim and Nicole, who were sleeping at the time.

Logan’s detection of the blaze, which originated in the chimney area, occurred when he was taking out trash outdoors, according to officials.

He quickly woke up his parents, and the family got out of their home and alerted the proper authorities without harm. The fire was quickly extinguished by the Cripple Creek Fire Department, with assistance by Southwest Teller EMS and the Victor Fire Department. According to O’Nale, the home was saved and the structure only incurred limited damage.

But at last week’s meeting, the fire chief made it clear that Logan was the main hero.

“Had he (Logan Ruppel) not acted immediately, because of the nature of the fire location, the outcome could have been tragic,” stated O’Nale in an official memorandum, read at last week’s meeting.

Logan and the entire family made an appearance at last week’s meeting.

In other fire safety matters, the Cripple Creek Fire Department has released a new Community Wildfire Prevention Plan. The document, according to O’Nale, takes an in-depth look at Cripple Creek’s wildfire threat and offers mitigation plans. O’Nale, who also complimented Rich Ingold and David Root of the Colorado State Forest Service for their assistance with the document, indicated the plan marks a major step in obtaining grant monies.