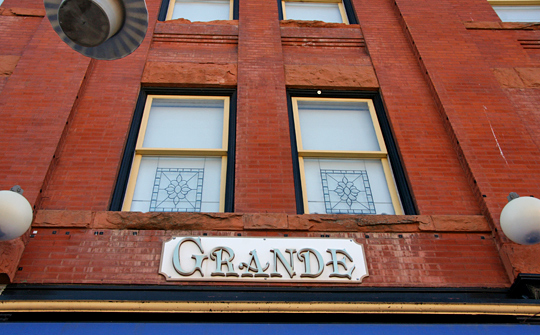 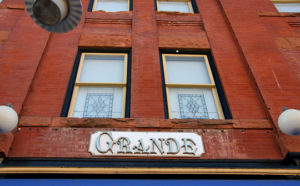 It’s that time of year again. Kids will be dressing up as ghosts, princesses, or their favorite superhero and go door-to-door trick or treating for goodies.

Halloween wouldn’t be complete without ghost stories, and Cripple Creek is a stronghold of the wispy apparitions. Here are some examples of the Creek’s most famous spooks.

Colorado Grande Casino
At the turn of the century, the three-story brick commercial building housed a variety of businesses, including a drug store, a millinery, an engineer, a lawyer and more. It’s rock-faced cornerstones,
recessed center entryway, and decorative molding made it one of the finest places in town for retailers to display their merchandise and offer their services. Over the years, the building also housed medical
offices, a Masonic Lodge ballroom, and a mortuary.

Usually appearing on the top two floors of the building, the sounds of her high heeled shoes are often heard echoing in the halls.

Described as about 25 years old and dressed in turn-of-the-century clothing, she wears a white shirtwaist, a long cotton skirt and high-heeled boots. The young beauty, with her hair piled atop her
head, is known to leave behind the scent of her rose perfume even when she isn’t spotted.

Some have reported that singing and dancing is sometimes heard emanating from the old ballroom, as well as the sounds of Maggie’s lilting soprano voice heard singing an Irish accented concertina.

At the casino, security guards have often reported seeing “Maggie” along with a gentleman friend playing the slot machines after hours.

She has also been caught on tape by the security cameras. However, after being viewed and stowed away, the tapes mysteriously vanished. 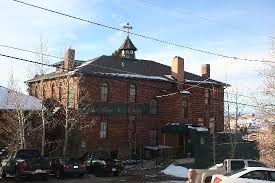 Hotel St. Nicholas
Perched atop a hill overlooking Cripple Creek is the Hotel St. Nicholas. Originally built as a hospital for the many people flooding the region in the late nineteenth century, the Sisters of Mercy opened
the St. Nicholas Hospital in 1898. The building also served as lodging for the Sisters and a school for students in its early days.

The hotel’s Boiler Room Tavern, popular with both locals and guests, is so named because the bar back is the front plate off the inn’s original coal boiler. Here, you cannot only enjoy a beverage, but also
a variety Mexican food menu, and live music during some weekends.

In addition to the opulence you will find at the Hotel St. Nicholas, you might also “find” a ghost or two.

Said to be haunted by a number of spirits including nuns, children, and former patients of the mental
ward, the most often “seen” ghostly resident is one referred to as “Stinky.” Lurking at the back staircase of the old hospital, “Stinky” makes his presence known with a sewage-like smell. The apparition of
an old miner with no upper body is also sometimes seen.

Another ghost, that of a little boy affectionately known as “Petey,” has been seen throughout the hotel, but most often is held responsible for stealing cigarettes and moving items about in the tavern.

Bronco Billy’s
The Turf Club was once a high-class men’s club in the late 1800’s, before Bronco Billy’a expanded into the old building. If was during this time, for reasons unknown, that the six year old spirit of a
young girl took up residence in the building, and has remained there ever since. Known as “Lilly,” the friendly little girl has sometimes been seen sitting on the stairs, cradling a rag doll in her arms.

Looking incredibly real, an employee once asked her if she was lost, to which Lilly replied, “No, I’m not lost, I live here.” When the employee left to get a security guard, the pair returned only to find
the little girl gone.

On another occasion, when a tourist was playing the slot machines, she lost track of her daughter. When she began to search, she found her perched on the staircase. Asking her daughter what she was doing, the young girl replied that she was playing with Lilly.

Lilly evidently has an artistic side as her drawings, numbers, and letters are often found in the hallway at the top of the staircase.

Although the walls are scrubbed down, the drawings always reappear.

According to the tales, Lilly is also said to like balloons, but only in certain colors. For example, if a blue balloon is left for her, it will pop. However, if a purple balloon is left, it will begin to
wander around the building on its own.

On occasion, someone will see Lily peering out of the upstairs windows to the street below.

The Imperial Hotel
In the early part of the 20th century the hotel was run by an Englishman by the name of George Long. Having emigrated from Europe as a young man, he made his way to Denver, where he married his first
cousin. Before long, the couple was running the hotel, focusing on service, comfort, and fine dining.

The couple also began to have children – two daughters and a son. Perhaps because they were first cousins and too closely related, their oldest daughter, Alice, suffered from a severe mental disorder. As the girl grew older, she became more and more difficult to control, until her parents were finally forced to keep her locked in their apartment next to the lobby. Today, this is the site of the Red Rooster bar.
Sometime later, when George was going down the narrow stairs to the basement, he fell to his death.

Though it very well could have been an accident, rumors began to abound that Alice had killed her father when he approached the top of the stairs, striking him in the head with a cast iron skillet.

The historic hotel is said to be haunted today by its former owner, George Long, who allegedly used to flirt with the ladies and play the slot machines.

Several night time former security guards of the old casino tell stories of how the ding-ding-ding of the slot machines and coins hitting the hopper are heard late at night after the casino has closed. However, when they checked the casino floor, no one is there. Later, when the machines are
checked for malfunctions, none are found.

Guests, especially women, have often felt something or “someone” touching them during the night. Another tale alleges that a chambermaid reported having her bottom pinched by an unseen hand.
The old mining town of Victor is also said to be a haunting haven.

The Victor Hotel
In the late 1800’s when the winter made the ground to hard to dig graves, bodies were stored on the fourth floor of the hotel, until the ground thawed.

It is apparently many of these long-dead Victor residents that hauntthe historic hotel today. Though seemingly harmless, several people have witnessed the site of disembodied apparitions on the fourth
floor. Reports include what look like both doctors and patients, sometimes without arms, legs, and even a heads, moving about this place that once acted as “holding cell” for the dead.

Throughout the hotel, guests often tell of seeing misty forms and hearing footsteps, sometimes accompanied by the sudden rush of cold air. In the kitchen, employees tell of utensils that are suddenly
thrown about the room.

But the most prevalent ghost is that of a man named “Eddie” who allegedly fell down the elevator shaft years ago. Staying in Room 301 at the time of his death, Eddie has often been seen in the room, in
the hallways, and in the elevator. Guests who stay in Room 301 also report hearing footsteps and other strange sounds that cannot be explained.

Though the elevator is regularly inspected and maintained, it often tends to activate itself going up and down the shaft when no one is near it. Always stopping on the third floor, the elevator’s ghostly activity usually occurs around 3:00 a.m.

The origins of Halloween go back 2,000 years, but have evolved over time to what we celebrate today.

Halloween used to be pretty much a kids day, but in recent years adults have put their own spin on Halloween. Grownups have co-opted this day as a great day to cut loose, roll play, and party. There are
private parties, adults only haunted houses in some cities, and almost every bar has some kind of Halloween themed thing going on, including special drinks and costume contests.

According to DDB Worldwide, a worldwide marketing communications network, “Some 13 percent of Americans ages 18-44 say Halloween is their favorite holiday. Many companies allow, and even encourage employees to wear costumes. Six million adults plan to dress as a witch this year, and 3.2 million will dress as vampires, say NRF and BIGInsight.

One million will dress as some type of athlete, and 767,000 will wear a politically-inspired costume.”
Happy Halloween to all, both young and old, and have a spectacularly spooky Halloween.