In the beginning of 2018, the Teller County Sheriff’s Office announced the launching of their “Get Out Of Teller” campaign.

As a part of the initiative, Sheriff Jason Mikesell urged anyone operating an illegal marijuana grow operation to “get out of town before sundown.” The efforts were a response to a law change that went into effect in 2018 that limited all homes to growing only 12 recreational marijuana plants no matter how many adults reside at the residence.

According to TCSO Commander Greg Couch, the sheriff’s office has made around two dozen arrests and confiscated millions of dollars of illegal marijuana since January. Most of the arrests were made 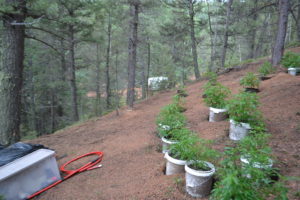 in the beginning of the year when deputies investigated around 60 leads they had received about possible illegal operations taking place within the county. According to the commander, some of the homes they have searched that were a part of those initial sixty leads were empty and abandoned by the time deputies arrived.

Battle Far From Over

Last week, an incident took place that gave local deputies a reason to believe that the battle against illegal marijuana grow operations is far from over. On September 15, authorities went to a home located near Florissant to conduct a welfare check on a resident. During the welfare check, the deputies noticed a strong odor resembling the smell of marijuana coming from a nearby residence. Upon further investigation, deputies confirmed that the marijuana smell was coming from a house located at 40 Turnabout Lane.

After finishing the initial welfare check call, the deputies contacted the two residents at the address to perform a compliance inspection of the potential grow operation. Shortly after entering the home, the authorities saw enough evidence in plain view to suggest that the property was being used for an illegal marijuana growing operation. The officials were quickly able to obtain a search warrant and then they conducted a thorough search of the residence.

As a result of the search, deputies found almost 200 plants, three pounds of processed marijuana and over $3,000 in cash. The officials also found evidence suggesting that the house was being used for illegal distribution activities. Kevin Nevada Bennett, 29, and Mackenzie Kae Amundson,30, were both arrested for felony charges relating to the cultivation and distribution of marijuana and were each given $50,000 bonds. Both individuals posted bond and were released at around 8 p.m. the next day on September 16.

According to the sheriff’s commander, this incident was a sign that many illegal marijuana cultivation operations still exist in the county. The commander said that recently the sheriff’s office has taken more steps to help increase the effectiveness of the office’s crackdown on illegal grow operations.

For one, the commander said that the sheriff’s office has recently applied for a grant that will help reimburse the county for resources they have used to bust illegal grow ops. According to Colorado.gov, “The Gray and Black Market Marijuana Enforcement Grant Program’s purpose is to provide financial assistance grants annually to local law enforcement and district attorneys through the local governments for the investigation and prosecution costs associated with unlicensed marijuana cultivation or distribution operations.” The program uses state money to reimburse counties that have incurred excessive costs due to large scale operations, organized crime, and marijuana getting grown in Colorado and sold in other states. The program also focuses their funding on rural areas and counties that have populations lower than 200,000.

The Teller County Sheriff’s Office also has made an inter-governmental agreement with the federal Drug Enforcement Agency to help with the state-wide crackdown on illegal marijuana.

According to Couch, as a part of the agreement, Teller County has assigned a deputy to the DEA task force that will aid them in busting grow operations across the state. In return, the DEA offers the sheriff’s office access to federal resources when an illegal grow operation or extraction lab has been found in the county. The relationship gives the county more access to the advanced technology and resources used by the DEA when busting illegal marijuana grow operations.