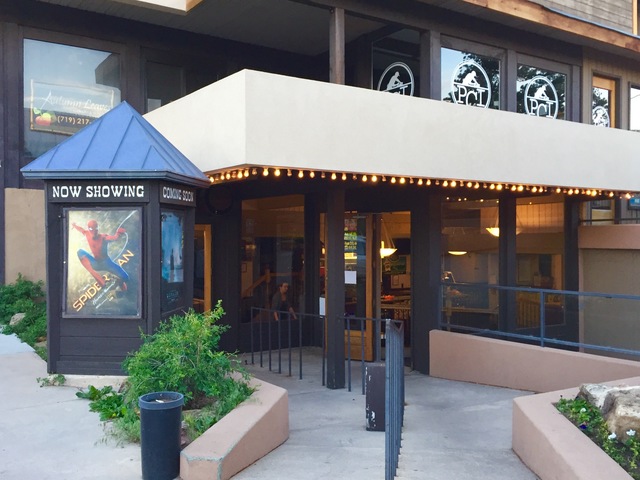 In the last few years, Woodland Park’s sole theater complex–Gold Hill Theatres– has seen quite a few positive changes and not rivals leading venues down the Pass.

Years ago, Teller County’s small movie hub was limited to two theaters that were just enough to facilitate the small town’s movie-goers. However, through the years, the area has grown, and the local movie theater has vastly expanded.

The first updates to the theater came in the form of up-to-date, digital projection technology for the original two theaters. Then, a new third theater was built located just to the east of the original two.

Now the theater can show four movies at all times on the three of their screens.

The next change came in 2011 when Gold Hill Theatres started serving beer and wine as a part of the movie watching experience. As business continued to thrive, the theater recently announced yet another change for the better. Late last year, the theater company was purchased by a local, young family that is focused on serving the community.

Towards the end of last year, Josh Overton, his wife Lacey, and their two daughters Aubrey and Adriana, made the decision to become the new owners of the Gold Hill Theatres.

“We were looking for a business opportunity, and we decided that purchasing the theater was a good fit for our family,” Josh Overton said. “Everything that has happened so far has proven that it was a good decision.”

The Overton family officially took over ownership of the theaters at the beginning of the year and has since then been focused on bringing back family roots.

Josh Overton grew up in Woodland Park and remembers going to the theater when he was younger. He and his family see the theater as an opportunity to offer entertainment to the community as well as a place for teenagers to work. A majority of the theater’s staff are high school students who are close to getting full-time jobs. The Overton family enjoys the opportunity to give soon-to-be adults the chance to learn job skills and build their resume.

In the relatively short amount of time the Overtons have owned the business, they have made several changes. According to owner Lacey Overton, the first changes that took place were ones that improved the theaters’ overall atmosphere. “We made changes to improve food quality and to improve the cleanliness of the environment,” Lacey Overton said.

The other significant change the new ownership brought about for the theater was the addition of a free movie for the kids in the community. During the summer, the theater offered free movies during the day on Tuesdays. For their last free summer movie, the new owners are offering a special treat. The last free movie that takes place on Tuesday, August 21 is “a big deal” and is a surprise. People are asked to watch the theater’s Facebook page for details and updates for the special event.

The theater now also offers the chance for local businesses to advertise during movie previews.

Currently, the theater features local business advertisements and the photography from local artists as a break from the usual theater commercials before the feature presentation.

The theater is now also available for events and private parties. It is possible now to rent out an entire theater to enjoy a movie of your choice for your company or personal party.

The theater also offers periodic monthly movies for senior citizens including events put on by Forest Ridge Senior Living. The older Americans vote on a classic movie they would like to watch, and then they get to show up on a shuttle and watch the film they picked. During the fall and winter seasons, the theater also puts on a Movie House Music event on one Sunday a month, where people can enjoy live music before and after they watch the movie of their choice.