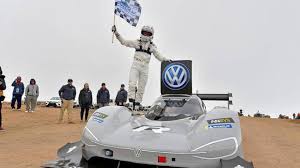 Despite rough weather conditions with hail and snow, the Broadmoor Pikes Peak International Hill Climb culminated with the record on the famous mountain getting shattered Sunday.

It also marked a good showing for Woodland Park’s famous local racing family, who this year tried out new vehicles and competed in new divisions. But unfortunately, both Clint and Codie Vahsholtz fell just short of the winning circle this year.

In 2013, Sebastien Loebe set the record for the famous mountain showdown making it up the hill in just over 8 minutes and 13 seconds. This year Romain Dumas sprinted up the hill and was given the record-breaking finish time of 7 minutes and 57 seconds, breaking the 8-minute barrier for the course. Dumas raced in an all-electric Volkswagen that made no noise besides a siren that warned spectators of the split second they would see the veedub shoot by.

“Volkswagen has sponsored a car that is trying to break the record this year,” said race traffic controller Jeff Mosher. And break the record they did. Dumas was quicker this year than he was last year in his 2017 Norma MXX RD Limited beating his previous time by more than a minute and averaging 94 MPH throughout the entire course. “I made no mistakes,” Dumas said. “This race is so tough!”

The local race hero family, AKA the Vahsholtz also had an impressive run as the father and son team both competed with new rides this year. Clint Vasholtz took the driver’s seat in a Mclaren and Codie Vahsholtz rode a new Ducati motorcycle. The father of the team Clint, took second place in his class, whereas his son Codie took third.

Clint Vahsholtz commented last week saying that his new car was several seconds behind the open wheeler his team designed and raced in 2017. His predictions based on practice runs proved to be correct as he finished with a time of 9 minutes and 52 seconds, which was over fifteen seconds slower than his run last year. Clint’s time still earned him eighth fastest overall and second place in the Time Attack division falling to rookie David Donohue in a Porsche.

The third generation racer Codie Vahsholtz switched divisions on the course this year just like his dad did. Since he was running his newly acquired Ducati, Codie was competing in the heavyweight motorcycle class compared to the middleweight class in which he raced last year and holds the record in. Codie was able to better his time from last year by over 20 seconds as he got a quick time of 10 minutes and 12 seconds. However, his new class proved to be more competitive than the last as both racers Rennie Scaysbrook and Carlin Dunne earned faster times.

Even though neither Vahsholtz were given a first place trophy this year, both had successful runs in their new racing machines. The father and son still do hold the course records for the middleweight motorcycle and open wheel divisions.