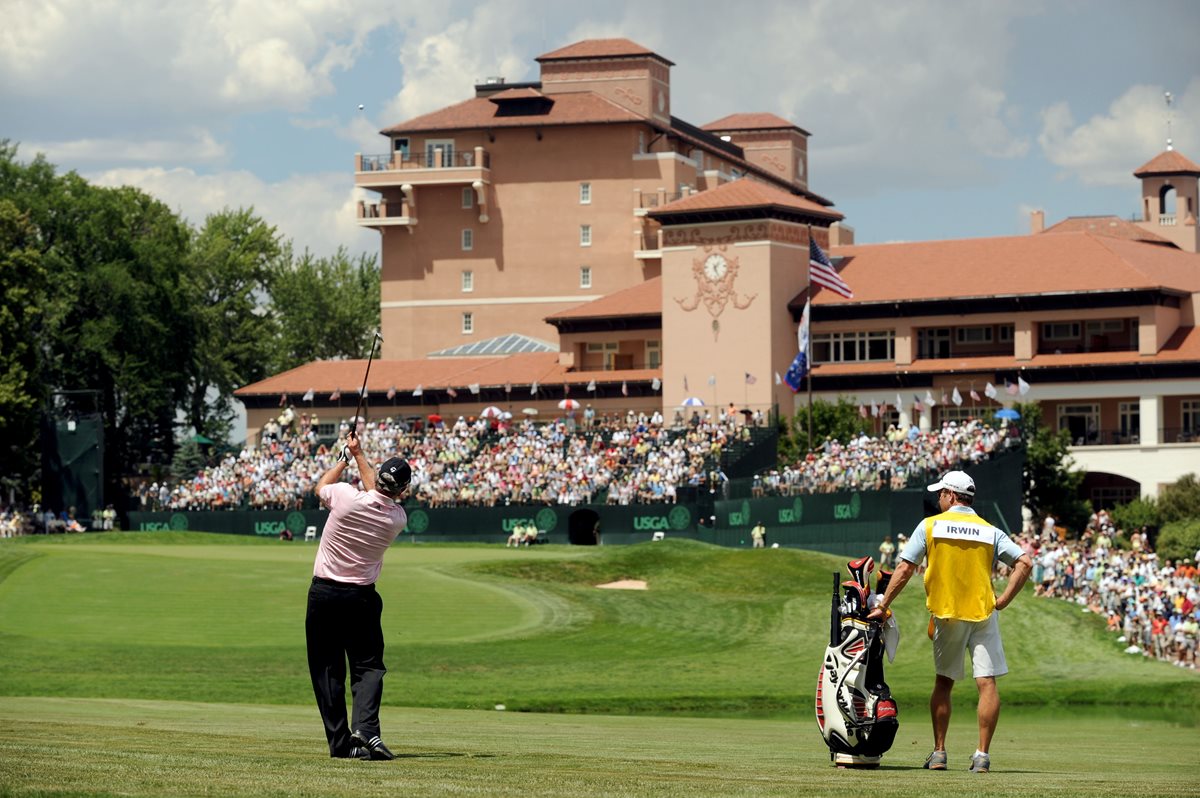 The big national golf showdown is just days away.

Starting June 28, the 39th U.S. Senior Open Championship will occur at the nearby Broadmoor East course in Colorado Springs, only minutes away from Teller County.

The four-day tourney will kick off with 156 of the top professional and amateurs age 50 and older, competing for most coveted prize in senior golf. Defending and two-time champion Kenny Perry is one of 10 U.S. Senior Open champions in the field, a list that also includes Colin Montgomerie, Bernhard Langer and former University of Colorado standout and a five time USGA champion Hal Irwin. Major champions in the field also include Davis Love 111, Fred Couples, Corey Pavin, Tom Lehman, Mark O’Mera, Lee Janzan, Tom  Kite and Vijay Singh. The field also includes crowd favorite John Daly, the winner of the PGA and British Open, and one of my favorites, John Cook (had a few beers with him at the Outback, great guy).

The big test, though, could involve the Broadmoor course, known for its tricky, slippery fast greens and high rough. Plus, at a yardage of the nearly 7,300 yards and a 70-par layout, the Broadmoor will offer one of the most challenging treks endured by players on the senior tour.

Many linksters in the area have played the Broadmoor and have their own horror stories regarding the greens, the mountain chimes (which U.S. Open champ Hale Irwin tried to get rid of in his last outing in the Senior Open. The chimes even got to John Elway in his failed qualifier attempt.) and the challenging, no-nonsense layout that favors shot-makers and not steroid-level drivers.

Some of the week’s  highlights include a military day, and warrior  challenge, a junior golf alliance of Colorado  youth experience, a drive, chip and putt qualifier, a Hale Iriwin shootout, an exhibition with Colin Montgomerie, autograph signings, junior day activities, fireworks displays and more..

Tickets are still available to the U.S. Senior Open that has been in the planning stages for several years. Tickets are available at the gate or online. Parking for most spectators is available at 3819 Janitell Road, with regular shuttle buses to the course.  Don’t park in the Broadmoor neighborhood, as you may not see your car again, unless you have purchased special permits.

As for tips for watching the tourney, stick to the trees and shaded areas on the front nine.  That is our prime advice, based on the ruthless heat that invaded the region in 2008, the last time the Broadmoor hosted the Senior Open. The Broadmoor, though, offers some great vantage points with its terrain and grandstand spots.

The Broadmoor course has quite a tradition, serving as the kick-off juncture for golfing great Jack Nicklaus in 1959 for the U.S. Amateur. It also launched the career of Annika Sorenstam of Sweden, who won the U.S. Women’s Open there in 1995. Of course, one of the most memorable images occurred in the 2008 Senior Open, when a black bear ran down the fairway, startling many spectators and capturing national attention. The 2008 Open also garnered much attention with the then TV romance between golfing great Greg Norman and tennis star Chrisie Evert culminated. Their bond was strong at the Broadmoor, but went downhill after the tournament. (Greg, stupid mate, you should have hung out at the Broadmoor more).

The last major jaunt for the Broadmoor occurred in 2011, when it hosted another Women’s Open. Unfortunately, that tourney, won by South Korean Ryu So-Yeon, was hampered by continual rain delays.

In many ways, the U.S. Senior Open has been a great fit for the Broadmoor. The course is a great stage for their national championship with its yardage and strategic setup.

At one time, the Broadmoor mulled the possibility of hosting a regular Men’s U.S. Open, but this pursuit was killed following much resident opposition. In order to qualify for consideration by the USGA, the Broadmoor would have been forced to add an extra 1,000 or so yards to its course layout from the pro tees, prospects that would have impacted the neighborhood.

But let’s not have any misunderstanding here, the senior players hit it very long. As commentator Paul Azinger said recently on the Golf Channel this tour isn’t a time for sipping red wine and smoking fancy cigars. (Actually, we think that is what Paul would have preferred, a reason he opted not to continue his career at the senior stage. Instead, he has found himself at the announcer booth).

The field will be reduced to 60 players after the first two days. One of the prime times will occur Thursday afternoon and Friday morning, featuring Daly, Love, Pavin and Kite. These top players play around the same time both days. Other prime times are available for Couples and Langer.

For information about tickets and the tournament, visit 2018ussenioropen.com.