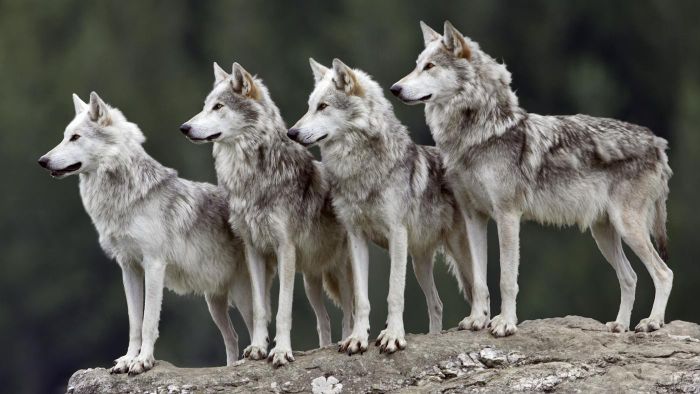 The reintroduction of wolves to Colorado is a contentious issue.

On one hand, environmental and wildlife advocates say restoring wolf populations in Colorado will bring balance back to the natural ecosystem, while on the other hand, ranchers and hunters fear wolves will prey on livestock and deplete the deer and elk populations.

Add the fear of wolves engrained in the human psyche by stories like Little Red Riding Hood and Werewolf movies and you have a stew of fear-based hatred of the wolf.

Wolves once roamed freely throughout all of the continental United States, from Washington State in the northwest to the Florida swamps, to Teller County.

No one knows exactly how many wolves were killed by the turn of the 18th century, but estimates are from one to two million fell victim to those determined to eradicate the species. By 1900, there were not many wolves left in the western United States. The few remaining animals were pursued by wolf hunter, ranchers, and herders eager to eradicate the species completely from existence in America, In1919, the government joined the anti-wolf campaign, passing a law that called for the extermination of wolves on federally owned lands. By 1942, when the law was abolished 25,000 more wolves had been killed by the government plan. The last wild wolf was killed in Colorado in 1945.

By the 1960s gray wolves were finally protected under what would become the Endangered Species Act. They had been exterminated from all the contiguous United States except a portion of Minnesota and Isle Royale National Park in Michigan.

The issue is once again hitting home in the Pikes Peak region.

Montana State Senator Mike Phillips gave a presentation on the science behind wolf recovery, at the Antlers Hotel, in Colorado Springs. Phillips is a biologist who has been involved in wolf recovery for over forty years. He began his career in wolf recovery in the mid-1980s with the reintroducing the Red Wolf to southeastern United States. It was the first attempt at restoring a major species ever undertaken. He was also on the front lines of wolf reintroduction in Yellowstone National Park in 1995.

Phillips contends that restoring wolf populations in western Colorado is an important step to maintaining a healthy and balanced ecosystem. As a biologist, Phillips bases his findings on science and data gathered over decades of research. He is science advisor to the Rocky Mountain Wolf Project, whose goal is to reintroduce wolves to western Colorado. He said, “Western Colorado is the mother lode of opportunity for the wolf. The abundance of prey and terrain are suited perfectly to wolves. Western Colorado is also the missing link in establishing a continuous line of wolf habitat from the high arctic to Mexico that will provide biological diversity for the species.”

The purpose of Phillip’s talk was to dispel the myths, misrepresentations, and misinformation surrounding wolf behavior. According to Phillips, the three most common roadblocks to the reintroduction of wolves in Colorado are fear for human safety, predation on livestock, and depletion of large game animals.

Phillips attacked each of these fears with science-backed data. First, he said, “Wolves don’t pose a threat to human safety. They just don’t.”

Phillips acknowledged that any predation on livestock is a loss of money to ranchers.

As for depleting big game animals like deer and elk, Phillips said, “When you take the 275,000 elk in Colorado there is this tremendous prey base. There is more than enough deer and elk to satisfy recreational big game hunting and the grey wolf.”

Hunters argue that wolves are just a killing machine and will kill just for the sake of killing. Not true says Phillips. He points to the fact that wolves only make a kill on average of 1 out of 10 attempts. Furthermore, he contends that the likelihood of a wolf being killed or severely injured by prey that outweighs them by at least double precludes the wolf killing just for the sake of killing.

There is an argument by Colorado Parks and Wildlife that wolves are welcome if they come on their own, but they stop short of endorsing reintroduction.

Phillips, though, says this is a false narrative. Wolves do roam. They can have a range up to 1000 square miles, but lone wolves seeking new territory will always seek out other wolves because they are the most social animals on the planet. If they don’t find others of their kind they retreat to where they can. Of the five documented wolves that migrated to Colorado, all five have died.

To add to the impossibility for wolves to migrate on their own to Colorado, Wyoming to the north has lifted the ban on killing wolves from the southern end of Yellowstone National Park, to the border of Colorado. This gauntlet makes it impossible for packs of wolves to naturally migrate into Colorado.

And yet despite the evidence, some cling to the belief that reintroduction of wolves to Colorado is a bad idea. One such individual is Colorado outdoorsman Steve Lohr. Lohr argues, “Yellowstone cannot be the argument for bringing wolves to Colorado. There’s no need for a trophic cascade,” said Steve Lohr. “It’s nonsensical to say this West Slope, or Middle Park or North Park or for that matter, the whole Great Basin is comparable to Yellowstone National Park. It’s not.”

He also feels wolf reintroduction would affect the economy of western Colorado. “Wolves create a serious drain on some economies that are important to Colorado. If you’re a wool grower and you’re losing sheep, the obvious loss is there. If you’re a cattleman, the obvious loss is there. If there are no more hunting opportunities there’s a huge loss,” Lohr said.

For a look at facts on the ground of how wolves affect the environment and on how wolves have changed Yellowstone National Park, watch below