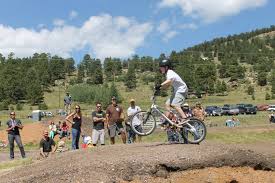 The sun was out, the birds were chirping and there was just enough of a cool breeze to make the weather perfect for the official ribbon cutting of the Mountain View Adventure Park in Cripple Creek, one of the most unique new outdoor facilities in the Teller high country.

The park has been open now for a couple of months since the city staff made the final touches on the hiking trail last March. The project began last year and was made possible through a number of grants from organizations, such as Great Outdoors Colorado (GOCO) and the Newmont Mining Corporation.

The park that is located just west of Cripple Creek near the city public works building has existed for many years as a BMX bike track and small park area. Several years ago, city officials had the idea to expand the park and turn it into an adventure hub that offers much more than just BMX bike racing. The BMX track was also added onto by several feet and changed to offer more challenging obstacles.

The grand opening and ribbon cutting party was a success as it brought out residents of all ages. The event started with the crowd enjoying the brand new playground and dog park, Teller’s first official designated canine hangout.

The ceremony started with speeches from several representatives from the city of Cripple Creek. City Administrator Ray DuBois and Cripple Creek Parks and Recreation Director Connie Dodrill both gave speeches during which they thanked a large number of people and organizations that contributed time and money to the project. The park’s grand opening culminated a lengthy process, as Cripple Creek fell short in its first bid to generate state funds for the project.

But the city succeeded in its second submittal for GOCO funds in a major way.

Nearly every city council member was present, as the ribbon was cut opening the park. Mayor Bruce Brown gave a speech and thanked many people that contributed to the success of the project. The ceremony represented an end to a year’s worth of efforts for city officials. After succeeding in generating more than $200,000 in grant funds, the city faced a tough timeline to complete the project.

After the ribbon was sliced it fell to the ground and allowed a group of people to take a 2.5-kilometer hike around the park’s hiking trail system. City Administrator Ray DuBois led the pack on the tour of the entire park, via the brand new trail system. After the hike, park enthusiasts enjoyed barbecue hamburgers and hot dogs free of charge.

After the break for lunch in the sun with rock n’ roll music playing on a loudspeaker, city officials held a “shotgun” disc golf tournament that was free to play. During the “shotgun” style tournament each player started at a different hole on the course to speed up the flow of the tournament. Prizes were awarded to the top three best disc throwers. 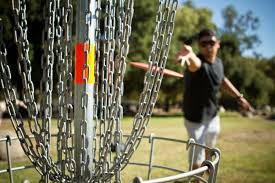 The Mountain View course is the first Frisbee golf links constructed in the Cripple Creek/Victor district. And with another major course in Woodland Park, Teller could soon emerge as the disk golf king of Colorado.

Disc golf and hiking weren’t the only draws of last week’s celebration. Folks with four-legged friends put their pets into a doggie competition that took place at the brand new dog park. The dog show had several categories where prizes were given out including so ugly I’m cute, the smallest dog, biggest and the one that does the most tricks.