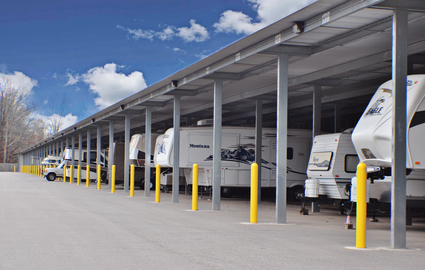 Last Thursday, the Woodland Park planning commission held a work session to discuss definitions and specifics outlined in a proposed ordinance that would allow for a business to open an RV, travel trailer, and boat storage/rental facility on certain commercially zoned areas of the city.


At issue is ordinance 1324, which would amend the current codes. The proposed changes would add language to the code that would allow “storage or rental of automobiles, RV’s, light trucks, motorcycles, off-highway or all-terrain vehicles (ATVs), snowmobiles, and boats.”  That’s if all outside vehicle uses are screened from public view by an approved fence or other approved buffering. Also, these outside uses would exclude storage or rental of damaged or junk goods of any kind. The rules also would add clarifications of definitions of certain vehicles.


The agenda listed several points the commission was to work on during the work session. However, the two-hour meeting was dominated by discussion of where such a business could be built in the city and how such a business should look to people in the community. 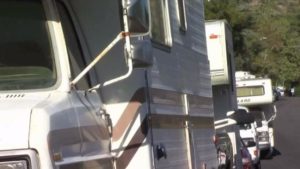 Before discussion began, a presentation was given by Linda Murray. Murray is a real estate investor who specializes in building and operating RV storage facilities. Her presentation focused on the different types of RV storage lots and the process a developer considers before going into the RV storage business. Murray does not have an interest in opening an RV storage/rental business in the city but does live in the area and felt her expertise on the subject would be valuable to the commission.


After Murray’s presentation, the commission reminded the audience that no decisions would be made at this meeting and then opened the floor to comments from the public.


Right off the bat, a citizen raised his concerns that having an RV storage facility in the city would create traffic problems at peak times on weekends when RV owners would be leaving the facility to go camping in their RV. He feared a line of RVs would cause traffic delays at the intersection of Hwy. 24 and  67.


Another citizen asked what economic value an RV storage/rental business would bring to the city in the form of employment and tax revenue.


Other questions raised by residents were: Is there really a need for an RV storage/rental business in the city? And where such a business should be built and what about the aesthetics of these facilities? 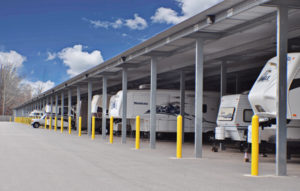 In her presentation, Murray stated that for an RV storage/rental business to be considered by a developer, they would need a lot that encompasses 5-8 acres in size. This alone limits the location such a business could be built to the old sewage ponds property on the south side of Hwy. 24 near Walmart, which is about 15 acres.


As the questions and concerns drifted further from the agenda and the purpose of the work session,

Commissioner Peter Scanlon brought the meeting back into focus. Scanlon commented that the only choices are whether such a facility was going to be open storage or an enclosed storage facility.

“You mentioned (directed at Murray) that partially enclosed canopy structure is probably not going to work very well because of wind and snow and wear and tear,” said Scanlon. “I struggle trying to figure out how open space could be hidden from public view. So I’m opposed to allowing this. I don’t see how any of the areas you’ve identified could be allowed for open storage and have that openness be hidden from public view. Having an enclosed building would make some sense. I worry about this whole issue having a visual and environmental impact.”

This led to a discussion on the size limits on a mini-storage facility. Current code limits the mini-storage unit size to 300 square feet.


In the end, a consensus was reached by the commission to strike all the new language from the ordinance, lift the 300 square foot limit on the size of a mini-storage building, and schedule another work session to address the issue further.


City Planning Director Sally Riley noted that there is no rush to get the pro-RV storage area ordinance approved and that further discussion should occur.


The next work session is tentatively scheduled for June 14.