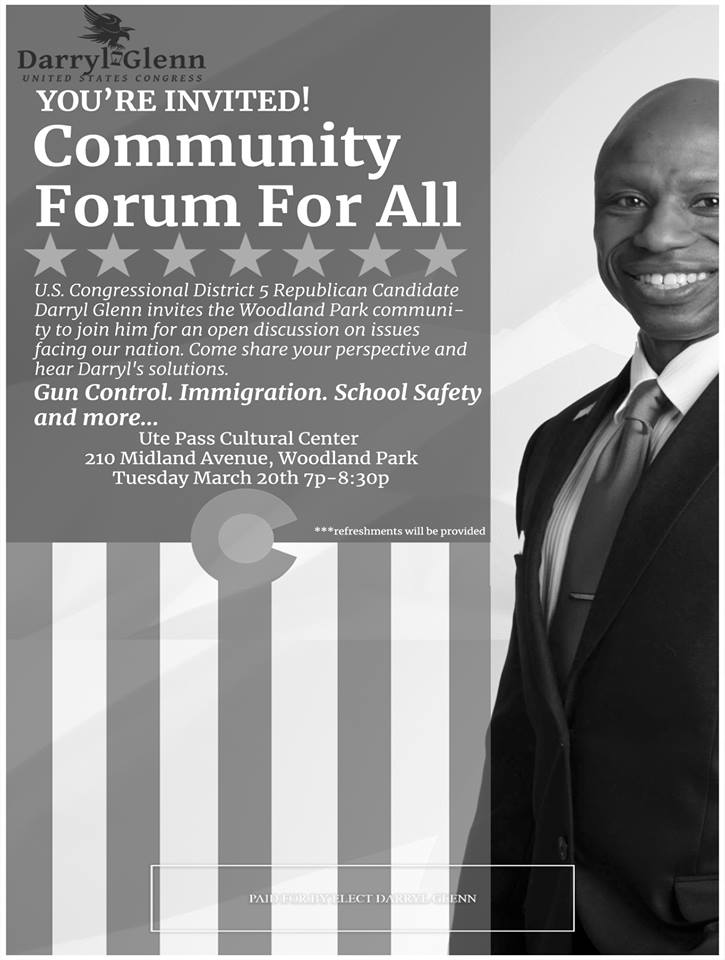 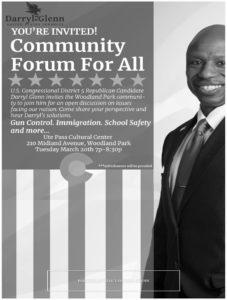 Let’s have a frank, civil conversation on the hot issues, and don’t let the federal government get in our way.

And despite all the media hysteria over school safety, don’t take away our guns.

These were some of the themes echoes during a community forum, conducted by Darryl Glenn, one of four GOP candidates for the heavily competitive Congressional District 5 race, last week at the Ute Pass Cultural Center. This position is regarded as one of the safest Republican seats in the U.S. Congress due to the predominance of the GOP Party in the region.

And with changes endorsed by Colorado voters, the upcoming primary election in June is open to Republicans and unaffiliated voters, a change that could alter the dynamics of the heated competition.

Instead of outlining specific views and lecturing to a small crowd, Glenn opened the forum up to the audience and sought to generate input from the public.

The congressional candidate, who currently serves as the president of the El Paso County Commission, didn’t have to coax the audience to talk. Residents weren’t shy about grabbing the microphone and outlining their views regarding gun control, school safety, immigration, the Internal Revenue Service, the Affordable Care Act, the Constitution and much more.

Not surprisingly, most participants disagreed with imposing more gun restrictions in dealing with the touchy issue of school safety. With the mass school shooting in Parkland, Florida, a national movement has been launched, with a focus on sterner gun laws. This movement even boomed in the Teller and Pikes Peak region, with hundreds of students, parents, and teachers participating in a national rally on March 14.

But at least for this strong GOP crowd, that’s not the answer. “I don’t believe limiting guns is going to do anything,” said one forum-participant, a line that received a strong applause. “That is not the right thing to do,” said another forum-goer, contending that it’s not fair to ask 18-year-olds to die for their county by serving in the military, but not to allow them to obtain guns.

Most people attending the Glenn meeting echoed similar sentiments. They cited other solutions to the national crisis gripping schools across the nation. Most mentioned mental health issues as the main culprit.

Glenn certainly agreed with the crowd’s sentiments. “I don’t believe in a ‘one-size fits all solutions,’” said the congressional candidate, in opposing federal oversight for gun control.  “I believe it is a local control issue.”

Most of the meeting attendees took positions, held dear to the Republican Party, such as a stern, no-nonsense view of immigration, and supporting President Donald Trump’s intentions to build a wall between the U.S./Mexican border.

But one exception emerged with the subject of affordable housing. Glenn cited this as a growing problem he plans to address if elected. “It is near and dear to my heart,” said Glenn. “Your congressman can lead the charge.”

Glenn said he plans to scrutinize current regulations that make affordable dwellings almost impossible to develop. He also vowed to bring leaders together who could make a difference in solving this problem.

These comments followed several pleas from people who unveiled horror stories of the plight their friends and family members faced in finding an affordable home. They described this as a growing crisis.

Glenn said he definitely opposes any efforts to place caps on building permits in local areas, an idea that has been tossed around in El Paso County with the area’s population surge.

In a later interview, Glenn stated that the subject of affordable housing has come up at virtually every community forum he has conducted throughout the mostly conservative 5th Congressional District. “I have been pretty surprised,” admitted Glenn.

We Can Do Better

The congressman, similar to comments at past forums, wasn’t afraid to throw out a few football metaphors in describing the challenges the eventual winner of the seat will face.

He said the congressional leader of the district could do better than what has occurred in the past, in a slight stab at the current incumbent, Doug Lamborn. “It’s like the (Denver) Broncos,” said Glenn. “You are not winning the Super Bowl. I want us leading the charge.”

The candidate was referring to the fact that even with a GOP-controlled House of Representatives, Senate and White House, party leaders were achieving limited success in garnering results. Glenn also made it clear he is not a slave to GOP policies and ideas all the time. “I am not a Republican apologist,” said Glenn.

Those points came out loud and clear during a Teller County GOP tent revival forum last summer. Out of all the GOP candidates that appeared, Glenn was the only one who slightly criticized Trump for not trying to unite the country more during a heavily publicized dispute that erupted last summer between white supremacy groups and African-American supporters during a violent clash in Charlottesville, Virginia.

“I represent the will of the people,” said the El Paso County Commissioner, who said he is not addicted to certain ideologies.

Another issue that surfaced at the forum dealt with social media. “We need to find a way to communicate with each other,” said local resident Amy Hart. “We need a grassroots movement.”

Glenn agreed and admitted he has found social media to become a huge burden. “It has hindered our way to talk,” said the congressional candidate. “Put technology aside and talk to each other,” he urged comments that got a hefty applause.

The congressional candidate said he is trying to have regular forums to generate civil discussions on the key issues. He urges constructive disagreements on many of these topics.

For his next forum in Teller County, which will be held next month, the subjects will deal with veteran issues and the topic of marijuana.