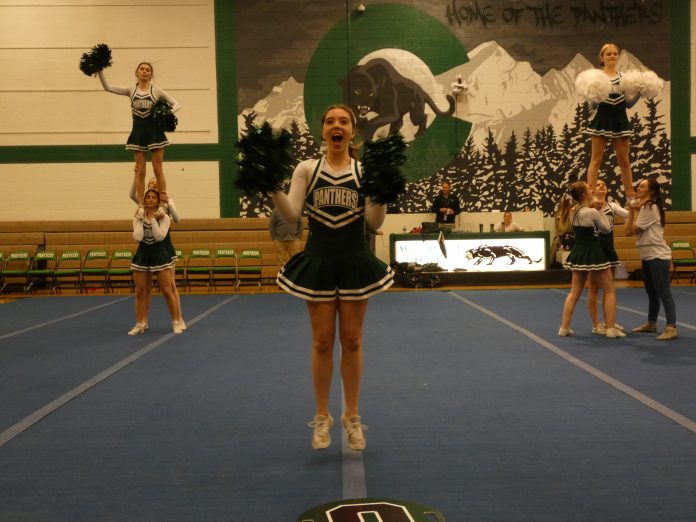 It’s now official, and time to beat the celebration drums: The Woodland Park High School cheerleaders accomplished their goal for 2022 and took home the state title.

In fact, they became the first Woodland Park sports’ team in school history that has brought home a state championship trophy.

Four years ago, the team placed fourth place statewide and then they got third, second and then first each following year. The girls will next head on to the national cheerleading championships in Dallas, Texas in February.

The school celebrated the cheerleaders’ victory with a special assembly last Thursday afternoon. During the celebration, the cheerleading team performed their trophy-winning routine in front of all of the high school students.

During the presentation, the high school principal Kevin Burr introduced the cheerleading team captains and congratulated them for their improvements over the last four years. “And now that we have won one title, they are planning on winning it again next year right?” Burr said with excitement.

The team’s captains, who have been on the team for the last four years, thanked their coaching staff. They also weren’t afraid to boast of their success, noting that they took either first or second place at every meet they competed in this year.

Cheerleading coach Shaina Lampton then took the floor and explained how cheerleading was scored, and what a typical routine consists of. While she was talking to the crowd, the cheerleaders demonstrated tumbling and the different aspects of their routine, which they often changed and varied for meets.

The girls then presented their routine to the crowd that consisted of choreographed dance moves, Panther cheers, tumbling and difficult stunts. The team pulled of the routine with zero mistakes as their peers cheered them on.

After they presented their routine, the school’s principal reminded the crowd how difficult their routines are to pull off. “I hope you understand something,” Burr stated. “There is no second chance to do that. They have one chance to do that in front of the judges. And any mistake they make is deducted, they don’t get a second chance to do it. What do you think the pressure is like for them? With the pressure that they were under in the state championship performance, they only had two points deducted.”

Woodland Park High School (WPHS) Fall athletes have many reasons to be proud, as they brought in several league, region, and state accomplishments, many of which WPHS has not experienced in several years. We would like to share another reason to celebrate our incredibly talented Fall athletes.

Numerous student-athletes earned All-State academic and athletic awards and All-League and All-Conference awards for their hard work and dedication during their respective seasons.

Congratulations, and thank you to our student-athletes for your outstanding work ethic in and out of the classroom. Also, we thank our coaching staff for your hard work and dedication to helping our students succeed and for continuing to build a legacy here at WPHS.