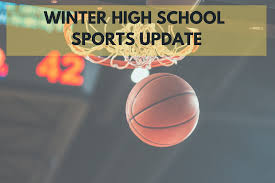 On the eve of the official start of winter, the high school sports season for a number of popular local sports has officially kicked off.

The Woodland Park High School athletes have started playing winter games, most of which are non-league bouts for now.

In fact, most of the high school sports teams have a light start for the next few weeks before the Christmas break. Then, the real stuff kicks into gear in the first part of 2023, when most teams play games that count towards their league record and post-season chances.

During the winter season the Woodland Park High School offers boys’ and girls’ basketball, boys’ and girls’ wrestling, boys’ hockey, and girls’ swimming. During the school’s ’22-’23 season, many of the teams have new players plus some veteran stars that are returning from last year.

Here is a brief preview of the winter sports’ season in Woodland Park.

The Lady Panther team is officially back on the courts and at the end of last week they had a handful of matches including one league game. The team’s coach Craig Macari is taking the reins again for ’22-’23 and they are all hopeful to improve from last year.

During the season last year, the girls had some key wins but they didn’t end up with a winning record. The Lady Panthers finished their season last year with a 7-13 overall record and a 4-8 league record.

This year, the ladies got off to a rocky start as they lost their first two games. On Nov. 29, the team lost their season opener at home to Elizabeth 45-33. On Dec. 1, they went on the road and fell to The Vanguard School 70-33.

So far this season senior Bella Slocum is leading the team in several statistics. She leads the team with a total of 27 points, 34 rebounds, and three blocks.

Senior Sydney Roshek has also proved to be a valuable player this year. Roshek has completed 43 percent of her field goal attempts and she has scored 19 points and picked up seven rebounds.

The ladies’ season continues this week with two matches before the Christmas break. On Tuesday, the girls play a non-league home game against the 2-0 SkyView Academy Hawks. Then on Thursday, they play a home league match against the 0-3 Rye Thunderbolts.

Last year the WP sports fan world was excited about the boys’ basketball team with former head coach Brian Gustafson at the reins. The team had one of their best seasons in recent years and they finished with a winning record.

Last year, the team had a 12-11 overall record and an 8-5 league record. However, the team only finished in 4th place in their league and they did not make it to the post season.

This year, the team is back with many returning players and looks to stride once again into the win column. The team this year is now under the control of head coach Kyle Crawford as Gustafson relocated to the Fort Collins area.

So far, the boys look like they are ready to win and they have great potential. The team hasn’t played any league matches thus far, but they had a 2-2 record at the end of last week.

On Nov. 29, the boys started off their season at home with a non-league match against Elizabeth and won 55-50. On Dec. 1, the Panthers lost to Pueblo Centennial 55-45.

Then during a tournament on the road on Dec. 2 the team fell again to Harrison 73-38. On Dec. 3 they played a tournament at home and defeated Mitchell 65-23.

The team this year has six seniors on the roster that are ready to be successful when it comes to league matches. The boys stay on the courts this week as they play the 1-1 SkyView Academy Hawks at home on Tuesday in a non-league.

The boys play their first league match this Thursday against the 3-0 Rye Thunderbolts.

This year is the first year in a while that there will not be a returning state champion in the wrestling ranks. Brady Hankin won the state championship three years in a row and then finished second during the 2021/2022 year.

But, even though most of the star wrestlers from previous years have graduated, the team is now filled with younger wrestlers who are looking to make a name for themselves. And so far, the team has won two matches that they played in the beginning of the season.

Most wrestling fans this year are watching lady wrestler Trinity Diamond, who is now a senior. Diamond has wrestled every year of her high school career and qualified for state every season.

Earlier this school year, Diamond already made the next move in her wrestling career as she signed on to grapple at the college level next year. Diamond is looking for blood on the mats this year during her final season as a high school grappler, and she hopes to qualify and place at the state championship.

Last year the Ice Panthers hockey team came out swinging and earned a winning league record. They finished in third place in their league last year with a 6-10-1 overall record and a 4-3-1 league record.

The boys play one more match before Christmas break and then they continue their season on Jan. 5. The Ice Panthers play this Saturday against the 0-2 Doherty Spartans.