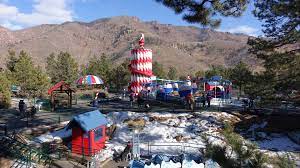 Now that December is officially here, many across the Pikes Peak Region look to find ways to get their family into the loving and giving holiday spirit. Stores and shopping malls work hard to instill the holiday spirit by playing Christmas music starting in October at some places.

Others choose to go on tours of homes that have their houses decorated inside and out with holiday-themed lights and ornaments. Colorado Springs and Woodland Park both hold parades in the beginning of the month to try to get people excited about the upcoming holiday.

But one of my favorite past times during the holiday season is probably something that older adults and people without young children don’t always think about. Located just west of Colorado Springs near the town of Cascade sits Santa’s Workshop in North Pole, CO.

Santa’s Workshop is a Christmas-themed amusement park that is open nearly year round. When most think of the park at North Pole, they think of it as a place mostly for small children to go to see Santa Clause and ride the rides.

However, Santa’s Workshop is actually a place that is popular for all ages during the holiday season. All sorts of people (including seniors) enjoy taking a stroll around the park to shop and just get into the Christmas spirit.

And this year, the amusement park announced that it will be open for free during select weekdays in the months of November and December. It still costs to ride the rides, but for people that want to walk around the park’s winter wonderland, shop in the stores and eat in the restaurants, admission is free of charge.

Growing up in the area, when I turned 14 I was of legal age to have a real job, but the local options were limited to mostly working at fast food joints. I was excited to turn 14 because I was of legal age to seek real employment other than my lawn mowing and babysitting gigs I had held for the couple years prior.

As I graduated from eighth grade, I began to search through all of my options in the Woodland Park area to find a real job. And since flipping burgers at McDonalds, or wrapping burritos at Taco Bell didn’t quite interest me I was let on to another option- being on the “village crew” at Santa’s Workshop.

Once school had let out for the summer I was offered the job on the village crew and was given 32 hours a week during the summer. At the time, the federal minimum wage was $5.15 per hour so that was my starting wage.

All 14-year-olds who started their first year worked on the village crew which gave us jobs that didn’t include operating rides or working with kitchen equipment. The tasks of the village crew would change every day from walking around sweeping the park, cleaning up llama manure, or selling cotton candy and popcorn out of the park’s popcorn wagon.

I learned the popcorn wagon well and due to my popcorn and cotton candy making skills I was quickly promoted to working the counter at one of the park’s restaurants. I was especially excited because my coveted promotion only took me two months to achieve and I was given a whopping raise up to $5.35 an hour.

I continued to work at the North Pole for three summer seasons during my early years and overall I loved the job. I enjoyed being around kids from places other than Woodland Park and being able to ride the amusement park rides for free while I was on break. To this day, I still encourage younger folks to go to the North Pole and work because I feel it is one of the best jobs a young teenager can have.

However, like any profession the job had its downturns. The biggest problem with the job for me was the fact that we were forced to listen to Christmas music during the whole season that started in mid-May and ended on Christmas Eve. In fact due to the job, I will tell you that I absolutely hated listening to Christmas music even during the holiday season for several years into my adulthood.

After a while though, my hatred for Christmas music slowly passed, and I started to appreciate my former place of employment. When I went there once when I grew older during the holiday season, I immediately understood that while I was a kid working there I would see senior citizen couples without kids that would pay to go to the park just to walk around and be in the Christmas spirit. These people would always have big smiles on their faces as they watched the kids run around the park and enjoyed the Christmas atmosphere.

To this day, I like to bring my mother to the park right around Christmas time to help remind myself of the good times I had working there and to help my mother and I get into the Christmas spirit. Those who are feeling a little “ba humbug” this year will find it hard to stay negative about the holiday walking around the park filled with friendly elves and Santa Clause himself. Visit Northpolecolorado.com or call (719) 684-9432 for more information on the park’s rates and hours.