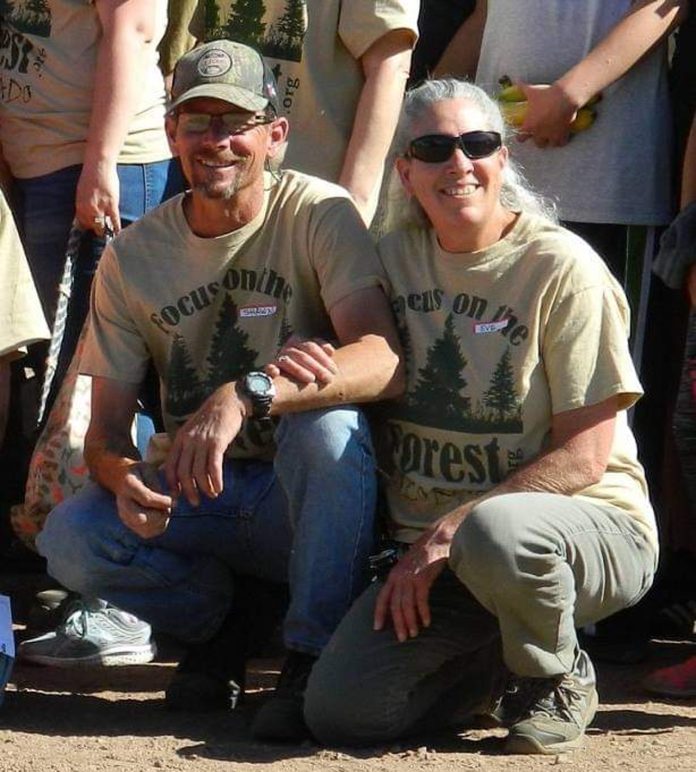 Having a mission dedicated to cleaning up the national forest might be a big goal for some folks. Not for Lighter Side of Christmas Grand Marshals Shawn Nielsen and Eve Woody.

Raised in California, both Shawn and Eve led full lives before relocating to Colorado.  Shawn worked as a fire sprinkler fitter and decided Montana was just too cold for relocating when work dried up there. A job in Vail took him to the mountains. He had an opportunity to train to be a plumber, leading to becoming a hydronic heating tech installing radiant floor heaters and boilers for heating in homes. An accident in 2008 resulted in 3 back surgeries and vertebrae fusion. While recuperating he relocated to Woodland Park and met Eve.

Eve received a Masters Degree in Mechanical Engineering and worked for PG&E Power Company in California. Following a car accident that resulted in a broken neck and a surprise pregnancy, her family relocated to a vacation home in Colorado. She spent time running vacation home rentals and a saw cutting business. A friend needed help at a local daycare and her future was set when she fell in love with the kids. Along the way, she met Shawn through his nieces and nephews in the daycare. Their relationship was integrated before they got together as a couple. “We were just best friends for a long time,” Eve recalls.

Focus on the Forest came about following a landlord almost doubling their rent. “We bought a travel trailer, enjoying camping and living the life,” he said. “That’s when we discovered the mess in the forest.” September 6, 2016 changed their lives. “We were camped in an area and the neighboring camper left behind a bunch of trash when they pulled out,” he said. “We picked up trash and posted on Facebook what we had done. Within 15 minutes we had 127 comments regarding how many people left messes in the forest.” They came up with an idea and a name. Focus on the Forest was born.

The first cleanup they scheduled was October 1 at Quaker Ridge following a post on social media. “They came to us and offered to let us host the event there,” he said. “Sue Green, then owner at the local UPS store, designed flyers and the community went crazy!” 68 people showed up to that first event. Local resident Laura Ross asked about coffee and jumped in to take care of not only coffee, but food as well for the events. “She was massive help!” he said.

“Neither of us had any idea what a nonprofit did and we really didn’t know that many people in the area,” he recalled. “We just started scheduling events and people just showed up.” There are currently over 3500 followers on Facebook and anywhere from 25 to 200 people who show up for each clean up event.

Equipment is the biggest need of the organization right now. “Our roll off trailer is ancient and needs to be overhauled,” he stated. “The repairs will cost over $4,000 where cost to buy a new trailer is around $30,000.”  Trash disposal is another big expense of the organization. “We have to haul to Green for Life (formerly Bestway Transfer) on the far east side of Colorado Springs to be able to afford to pay for the load.” Shawn said the round trip is over 3 hours following each clean up. They have moved over 500,000 pounds of trash to date and 617 car tires.

Shawn and Eve have a vision of locating chapters throughout the state. A Graffiti Removal Crew has already been established in the Monument Chapter along with their local cleanups. They had fundraised to buy an Eco Blaster to remove graffiti and had one woman message and purchase the equipment for them on the spot. “Folks want our forests to be natural, not trashed,” he said. The Holiday Home Tour event also raised funds to help them get an event trailer to store all of their equipment. “It’s a game changer to have all of that in one location to be able to haul to the events easily,” he said.

Focus on the Forest is 100% volunteer. “Our motto is One Piece at a Time,” he said. They can be reached at www.focusontheforest.org or 719-286-0077. Smile.Amazon.com is also a fundraising option this holiday season as .5% donation of the price is made from each eligible purchase.  Grand marshals Shawn and Eve will be in the Lighter Side of Christmas Parade on Saturday, December 3 kicking off at 6 PM in downtown Woodland Park.