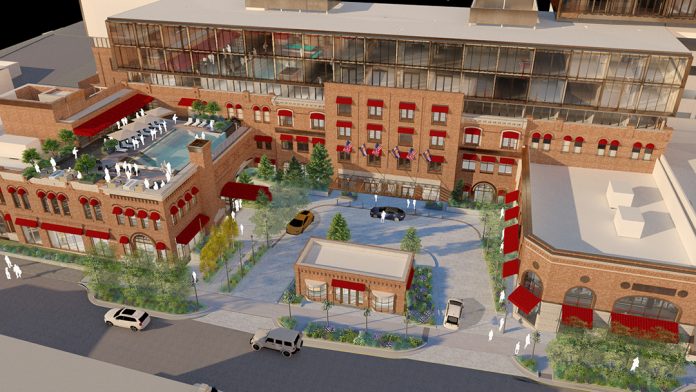 Cripple Creek’s most ambitious hotel project in recent history, the Chamonix resort, has been granted another completion extension.

The Cripple Creek City Council last week swiftly approved a request to extend the permit deadline for Full House Resorts, the owner of Bronco Billy’s, allowing the developers more time to complete a $250 million, 300-room, four-star hotel project that has commanded main stage attention. Bronco Billy’s celebrated the development in late September, with a traditional topping-off ceremony, part of a good luck gesture for grandiose developments, with historic ties dating back for centuries.  That’s when civic leaders and members of the public got a sneak preview of the hotel and its massive meeting and convention hub and tower setup.

The new deadline has been set for Dec. 31, 2023. This marks a six month extension. The project proponents have already received several extensions for city variances. The development was previously designated as a project of special merit.

With construction delays striking virtually every commercial development, the council didn’t waste too much time in granting this request. This extension was needed due to the variety of special permits granted to Billy’s, dealing with significant road vacations.

Dan Lee, the chief executive officer of Full House Resorts, stated that the project is proceeding quite well, and may come close to meeting the original July deadline.

He cited delays with the completion of Tower  Two, which is critical to the opening of the hotel “It is a very complex building,” said Lee “There were structural issues with the building demolitions.”

Lee outlined in detail the reasons needed for the opening delays. “We don’t need to open all the rooms at once,” said the Full House Resorts CEO. However, he stressed that the Tower Two area is critical to the hotel operations.

But he didn’t have to twist too many arms with the council. The elected leaders, who have praised the development as a new era for Cripple Creek, signaled the green light without a single comment.

The $250  million project ranks as the most elaborate and tallest in Cripple Creek’s history. It will stretch to a record nine-story level from Bennett Avenue.

The project was actually first proposed in 2018, and then came to a halt during COVID, and rebounded with new plans, calling for more hotel rooms, and constructing both the hotel and parking garage at the same time. New permits had to be approved to set the stage for a vastly larger project that initially proposed.