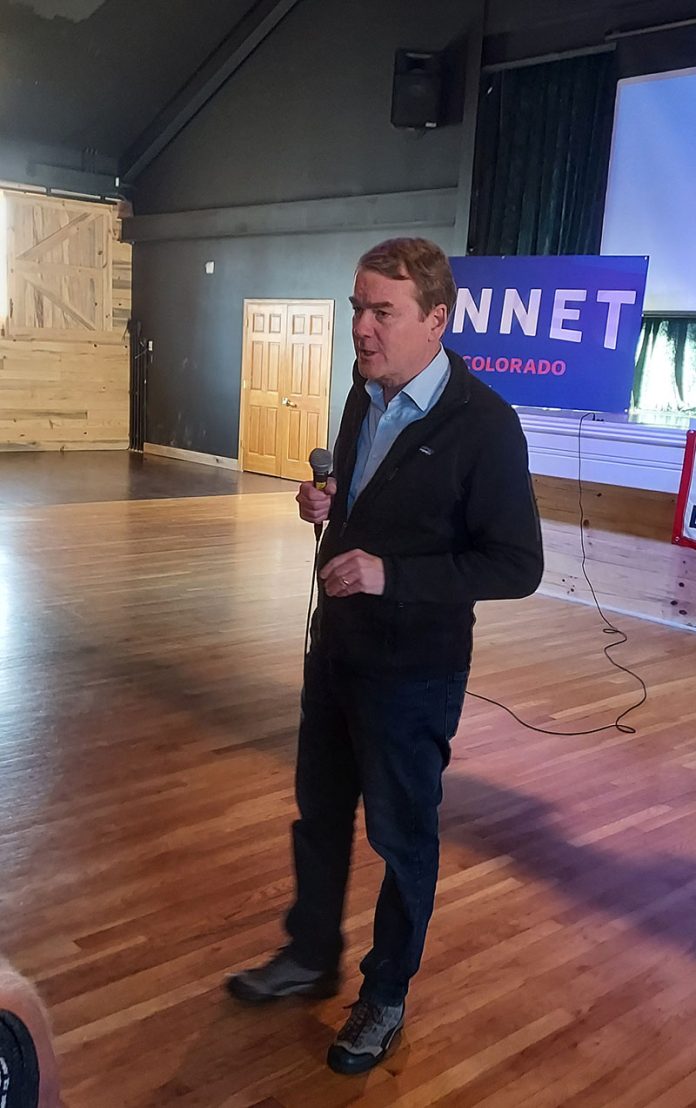 The old cliché is that Teller County is occupied by more donkeys than Democrats, a rare breed indeed in a red-enshrined conservative zone.

But during a recent Sunday afternoon, this belief was shattered as 100-plus people  gathered inside the Ute Pass Cultural Center in Woodland Park to attend a grassroots campaign event, highlighted by the appearance of incumbent U.S. Senator Michael Bennet, who is seeking re-election in a tight race against Joe O’Dea. This race is critical and could determine which political party takes control of the U.S. Senate.

The rally at the Cultural Center  marked a definite change from the far majority of campaign events in Teller, orchestrated by the Republican Party

The huge crowd even shocked Bennet, who had to be practically pulled away from the Cultural Center main floor by campaign aides after spending well more than his allotted time. Bennet said the last few times he came to  Teller, he was lucky to see more than a dozen people at his events.  He appeared visibly moved by the large number of attendees.

The rally indicated  that a Blue, progressive spirit still is present in the Teller high country, even though Dem voters are heavily out-numbered in Teller County.  The participants weren’t shy about expressing their support for Bennet and in raising concerns over the agenda of certain Republican leaders,  and a  possible return of former President Donald Trump to the political stage and the GOP control of Congress. And not surprisingly, the fragile state of America’s democracy was highlighted by  many participants, as they recapped the insurrection of Jan. 6, 2021.

“You don’t have to accept chaos,” said Bennet, when addressing the mega crowd, and describing the policies of the former president. .

Bennet urged the crowd to play an active role in the election, and more importantly, to get out and vote. “Every single election is the most important election in our lifetime,” said Bennet, when describing the attitude that area Dems, progressives and moderate voters have to take.

He argued that the best way to combat fears about losing our democracy is to exercise your right to vote. Bennet admitted he was stunned by Trump’s rise to power and his ability to capture the 2016 presidential election. “That would have seemed impossible,” said the senator, when discussing the views of political insiders at the time. He described Trump’s ability to captivate many voters with a “dark vision” of America.

On the upside, Bennet praised the voting system in Colorado, with its ample supply of secure ballot box outlets and vote centers, done to  make the process of voting quite easy. He  said this system is far superior to such states as Texas, which he accused of trying to make voter access very difficult.

Currently, Bennet noted that Colorado rates as number two in the nation for voter participation (based on the percentage of participation by active voters), falling just behind Minnesota.

Bennet, during the Oct. 16 rally, primarily touched on his stand on federal issues, and his apparent outrage over the Supreme Court’s decision to overturn the Roe versus Wade law regarding abortion rights. “It has been a 50-year project (among Republican leaders),” commented Bennet, who received raving ovations when talking about this issue.

And despite all the reported craziness regarding Donald Trump, he said the former president’s successful action to name three conservative judges to the Supreme Court propelled him to a hero status among Republican leaders.

No Shortage of questions

Bennet fielded a slew of questions from audience members, including concerns about the abuse of the filibuster tradition in the U.S. Senate (now requiring 60 votes on most legislative matters to move them forward), energy, affordable housing, child care tax credits, health care and digital media.

Bennett also got  hit with a real local hot potato, when he was grilled extensively about the role of Charis Bible College and the Andrew Wommack Ministries and the Truth and Liberty coalition.

One rally participant  requested an investigation into the nonprofit group’s practices, and raised questions about what she described as AWM’s  growing, unchecked power in the community.

This question apparently referred to a recent city council decision to not require AWM to pay any property taxes for a recently approved housing development.

Bennet, however, took the Fifth on this issue, and said he really didn’t know enough to respond. He asked his staff to review these concerns in more detail.

Bennet was a little more open on some of the crowd’s concerns regarding the actions of the federal government and his views on key legislation. Bennet took a strong stand against what he believes is an outright abuse of the filibuster tradition,  which can stall legislation unless 60 votes are generated in favor or opposition to a specific bill. If anything, he believes if legislation is going to be stalled by this effort, opponents needed to be present in the chamber.

But he took some by surprise, when he pointed his fingers at both party leaders for the problem, namely Senate Democratic Majority Leader Chuck Schumer and GOP Minority Leader  Mitch McConnell. “They have too much power,” said Bennet. “Fifty-one people can make a decision,” said Bennet, who favors a straight-out majority vote in the U.S. Senate on moving legislation forward or denying it.

Bennet also cited his support for child care tax credits  and a public option for health care. “I ran an unnoticed  campaign for president,” quipped Bennet, when describing his previous run for the Democratic nomination for president in the 2020 race, when he emphasized some of these issues.

The senator also commented on the almost tribal divisions that have occurred across the country, with the rise of social media and an increase in false information, a trend that some attribute to the insurrection at the U.S. Capitol.   The senator said ‘enough is enough.’

“We are being divided by the digital media platform,” blasted Bennet.

In reviewing history and the role of the founding fathers, Bennet noted that they always expressed concerns about the potential of tyranny.

Bennet believes this age-old tradition of people disagreeing on certain issues, and accepting differing views, has been lost.

Dennis Luttrell, a Democratic candidate for commissioner in the District 2 race, also  made a few comments during the rally. Luttrell cited the significance of the affordable housing shortage in Teller County and cited his track record in solving this problem and in lowering taxes. 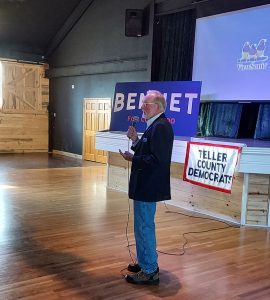 Laurie Glauth, a long-time Teller Democratic Party leader, also  made a pitch for everyone who attended last week’s event to get involved and not to get intimidated by the Nov. 8 election ballot, the longest in recent memory.