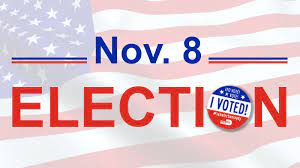 Ballots Mailed Out in Teller County For Pivotal Vote

The big day is right around the corner, and the long-awaited Nov. midterm election has officially kicked off.

On Monday, an estimated 19,000 ballots were mailed out in Teller County for an election that features the longest slate of questions, propositions, amendments and judge retentions in recent history. Get your reading glasses on, as voters will grapple with about 40 questions, which has been described as a possible record.  The length of the ballot pretty much paralyzed an effort, proposed by some vocal  county residents, to return to a hand-counting of the ballots (see related story), even as a back-up measure.

And there is the battle for a slew of  key state, national and local races, including the showdown for governor, a U.S. senate seat for Colorado, secretary of state and more, not to mention the newly aligned Congressional, District 7 position. Most county seas are up for grabs too, but only one position, County Commissioner, District 2, will feature a competitive contest.

And on the local ballot proposition front, Cripple Creek residents will finally get a chance to decide an issue that has been discussed for years: opening the door for retail marijuana outlets and approving the associated taxes with legal weed. Residents there also face a question pertaining to a slight increase in the sales tax, while residents of the Divide Fire Protection will decide on a proposed tax  hike.

This is just a short sample of Nov 8 election ballot, often described by some media pundits as a “War and Peace” epic.

Plenty of Options for Returning Ballots

The county has announced their process for the returning of ballots, with the establishing of secure, 24/7 ballot box outlets at the courthouse in Cripple Creek, Teller’s Clerk and Recorder branch office in Woodland Park and the Divide Market Place (AKA Venture Foods)

The use of the ballot box outlets has been the preferred method for residents. But those who want to vote early, can mail their ballots back, but this  method is discouraged within seven or 10 days of the actual deadline, Nov. 8 at 7 p.m.

Voters who want to do things the old-fashion way can also visit the designated vote center, which will be established during week days and certain weekends at the Woodland Park Public Library, from Oct. 24 to Nov. 7. A few other vote centers, such as the Centennial Building in Cripple Creek and the Florissant Library will be available on election day.

Residents are encouraged to review sample ballots, available on the county’s website to get a peek preview off what to expect.

Election officials are predicting a big turnout, and are encouraging residents to turn in their ballots early.

For complete information, visit the Teller County website at www.coteller.co.us.