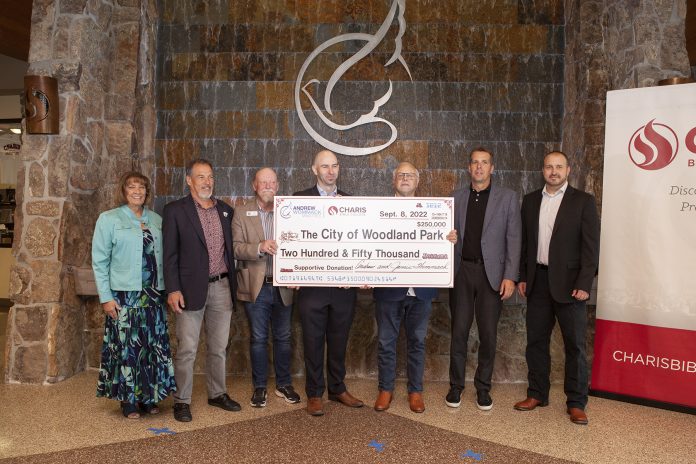 Last Thursday marked a turning point for the future of the city of Woodland Park and the Charis Bible College.

After the WP Council recently voted to allow the college to build housing units tax-free, Charis officially announced plans for construction on their new project. The official ground-breaking on the $6.5 million project occurred last week. It took place during the same day as when the college presented the city of Woodland Park with a $250,000 check to help the municipality handle its recent growth.

City officials also enthusiastically gave the thumbs-up for the college’s largest first year class of students in its history. During the start of the school year, the college welcomed their largest student class on the books with 430 new students bringing their total enrollment numbers to more than 1,000 for the first time in the school’s history.

According to Andrew Wertz, the senior vice president for Andrew Wommack Ministries (AWM) and the Charis Bible College, the construction of four of the 40-bed units that started last week are slated to cost $6.5 million. The first four units are scheduled to be open and ready for new students to move in by the start of the fall semester in 2023.

In the end, the college plans to build a total of eight units to accommodate “traditional” students between the ages of 18 and 22. Construction will start on the next eight units after the first four are completed.

After receiving the check, the city now has the $250,000 donation from AWM that was announced at a council meeting in August. According to Woodland Park City Manager Michael Lawson, Woodland Park plans to use the donated funds to purchase water shares to aid the city in its recent growth.

Lawson said that the city plans on using the donation to purchase more water shares from the Twin Lakes Reservoir. “If you know anything about Woodland Park, you know that we only have so much water and it is a very finite resource for us,” Lawson explained. “So, we told them that their biggest impact is water and if you continue to grow, that is possibly water that is not available for other uses in the future thereby limiting the city’s growth in the future. We told them that if they were to offer a donation that we would highly recommend and most likely use it to try to acquire additional water rights. So, that is our plan for that money because it is a direct connection to Charis’ biggest impact on our community. So that helps offset the impact of growth in the future.”

When representatives for Charis first announced the $250,000 donation at the council meeting in which the housing project got approved, they said that it was “non-binding” and it was a gesture to be a good neighbor. “The offering was just a decision by Andrew Wommack to be a blessing to the city,” the Charis Senior VP said. “The donation to the city was just a generous donation by our founder to help the city.”

In total, Charis officials said that the bible college has donated more than $800,000 to the community over the last several years. AWM has given to the local pregnancy center, food banks, the fire department, and the sheriff’s office.

“During one of the last fires, we ended up buying a horse trailer for the Teller County Sheriff’s Department to help them get horses out,” Charis Vice President Mike Pickett said. “And, we recently purchased all of the tasers for the Teller County Jail. We also bought some body armor a little over a year ago. As needs arise in the community, and Andrew (Wommack) is made aware of them, he has repeatedly given to them. And it is not just monetary it is in manpower. We also had a city cleanup recently and 60 percent of the people there were from Charis. ”

Charis officials said during the check presentation that the donation was a big step towards being a good neighbor and a symbol of their efforts to maintain a continuously good relationship between Charis and the city.