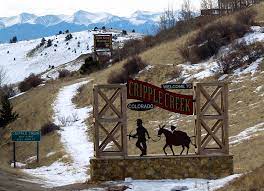 Cripple Creek residents and business operators can’t be accused these days of apathy.

Last week’s city council meeting bustled with public comment on a score of issues covering the gamut from the Bronco Bill’s expansion project and short-term rental questions, to variance requests and the success of Donkey Derby Days.

Topping the list involved several residents who raised concerns about the height of the Billy’s new expansion project, called the Chamonix resort, which will stretch to nine-stories from Bennett Avenue when completed. The completion date is slated for around July 2023.

Some nearby residents say the height, which seriously impacts their views of the adjacent mountainside, isn’t what they were promised when plans were personally presented to them. They question if the additional stories, resulted from the COVID-pandemic period, when public meetings didn’t occur like they did in the past. They argued about the transparency involved in these decisions.

Mayor Pro Tem Tom Litherland, who has expressed concerns previously about this situation, suggested that possibly Full House Resorts, the owner of Bronco Billy’s hold a town hall public forum to answer questions and concerns about the project.

The new development will become Cripple Creek’s most elaborate lodging venture ever proposed, with 300-plus rooms, a mega parking garage and a spree of four-star amenities.

According to a report made last week by Teller County Commission Vice-Chairman, the project reigns as one of the biggest new lodging ventures being done in the entire Pikes Peak region Stone cited this project as one reason the city and county needs to receive its share of gaming revenue, citing this as a key example of the area’s expansion.

The mega project, though, has generated its share of controversy and confusion.

During a meeting last March, building official Ken Hartsfield acknowledged that a problem did occur with an original posted building variance resolution by the city that didn’t mesh with the approved plans. As a result, a revision was approved by the city council last spring to allow the development to proceed on schedule. The council was basically told that the nine-story development complied with the plans submitted and approved.

“The text in the (original building variance) resolution was incorrect,” said Cripple Creek Building Official Ken Hartsfield, in a meeting last March. Similar sentiments were echoed by Cripple Creek city attorney Erin Smith. “There is a difference in form, not in substance,” said Smith, who downplayed the city’s error, and praised Hartsfield for his diligence in researching and correcting the situation.

At the time, city officials noted that no real change will occur with the project and that recently revived architectural and building plans are being followed. The Bronco Billy’s expansion was actually initially approved in 2018, following a number of lively meetings. It was then put on hold due to the state and national mandated casino closures, in the wake of COVID-19 epidemic. And then when casino action returned to the forefront and betting limits were lifted, Full House Resorts decided to embark on a much larger hotel and more speedy construction effort.

The project has been moving full-speed ahead in recent months.

No action was taken by the city council on this issue at last week’s meeting. The council though expressed support for the idea of having more of a public forum on the development. A few elected leaders have expressed concerns over how the approval process was handled, but the overall development has received strong support.

Besides the Bronco Billy ‘s project, residents last week also asked about the short-term rental process. The city opted to extend their moratorium for two months. But at the same time, they approved new guidelines for operating STR properties.

A few STR operators questioned the utility fees and other related costs. Contrary to certain opinions, they noted that STR operators aren’t the big villains and are not raking in huge profits.

A series of variance requests topped the agenda last week, with a score of residents seeking a reversal of a denial decision proposed by Hartsfield for accessory structure in a residential area. Due to their strong pleas, they were successful, and structures proposed by resident William Dement of 340 West Bennett Avenue. Residents lauded his efforts in cleaning up the area

This appeared to strike a positive chord with the city council.

On the upside, the recent Donkey Derby Day festival was described as a huge success. “The event, from a business, visitor and resident prospective was not only a home run but a grand slam,” said Curt Sorenson, president of the Two Mile High Club

He stated that the event drew approximately 20,000 people into Cripple Creek. For the future of the event, he asked for help from the city in the form of infrastructure, especially with staging.