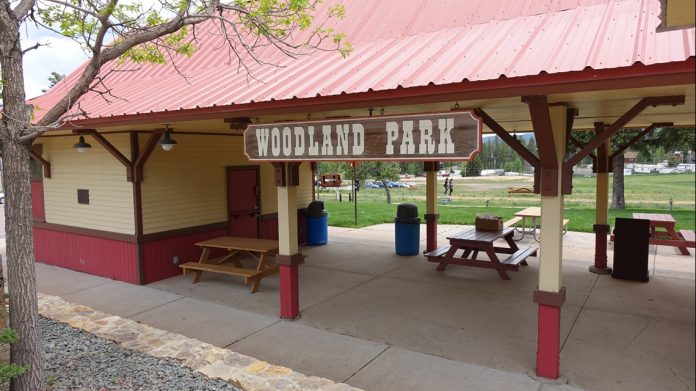 Mark Weaver, a spokesperson for the Waggoner group consortium, spoke at length with the Woodland park Downtown Development Authority (DDA) board last week on the sale contract and a number of conditions dealing with their proposed development of Woodland Station, capped by the planned TAVA House.

This site, which formerly housed a rodeo arena, has been what many thought would become the prime commercial anchor of the downtown. But for two-plus decades, it has mostly sat idle, other than  hosting a few historic artifacts for visitors.

That scenario, though, could change, if a new development plan moves forward.

At the September DDA meeting, the board voted to accept the Waggoner group offer of $800,000 in cash for 6.3 acres of Woodland Station with a target closing date, now slated for next month.

The first order of business Weaver discussed a change on the contract for the sale of Woodland Station from August 31, to the end of October.

Weaver then stated that, “things are moving pretty fast.” and gave an update on the timeline regarding moving forward with the development plan. He noted meetings with city staff, the bank, and the architecture firm are ongoing.

He noted that to keep things moving quickly the change in the contract needed to be approved so there wouldn’t be a delay. Approval of the contract change will also speed up the finalization of the disposition and development plan.

DDA Board Chairman Tony Perry stated that the contract changes appeared to be standard boiler plate format so that wouldn’t be a problem. But the DDA chairman outlined some  concerns regarding provisions that protect the city from financial risk. He asked Weaver if he had considered some of those provisions. Weaver responded that these issues were being worked out with attorneys from both sides.

The issue of residential housing came up and Weaver stated they want to move forward with the commercial construction “as fast as we can just because of time pressure with the TAVA House.” This venue will emerge as the center piece of the project.

He went on to explain that they will work with David Weekley Homes for the residential component, but “we can’t wait” for them to work out their side of the development.

Board Member Jerry Good raised the question of residential units on the ground floor of any development on Woodland Station. Good quoted an overlay district document code dealing with permitted uses of Woodland Station that states there should be no residential housing on the ground level due to the health hazards present from a benzine plume that contaminates the soil on a portion of the property.

Perry suggested that in his opinion that that code should be removed by a vote of the DDA board and brought before city council for their vote. Perry noted that that code killed former plans by other developers.

Rusty Neal, the city council liaison to the DDA Board,  chimed in stating that the Woodland Park’s comprehensive plan addresses the issue of  residential units on the property in detail.

Weaver agreed that the developer will be responsible for all mitigation of the benzine in the soil. Perry then noted a project in the Springs that mitigated toxic soil by removing and replacing the toxic soil with fresh soil.

Good then turned to the other elephant in the room, the cost of infrastructure improvements. He said, ‘I would feel more comfortable if that is determined before the contract is signed.” Perry was first to jump on the issue. He said, “From my perspective this isn’t going to be a repeat of Lot 1.”

In that case, according to Perry, the DDA sold the property for $200,000 and put $900,000 into infrastructure. Perry suggested tax increment finance agreements may be a way to induce future developers to pay for infrastructure improvements.

Neal suggested language be included in the development and disposition agreement that will protect the city and impose fines, penalties, and other assurances, if the property reverts back to the city if work cannot be completed.

Still, the possible infrastructure costs appear to reign as the main stumbling block.

“We simply don’t know what all that infrastructure is going to be or will require,” said Weaver, in responding to Neal’s concerns.

Weaver stressed the need to move forward as quickly as possible with the commercial and add provisions into the development and disposition agreement.

Ultimately, the board decided to hold a special meeting to get the attorneys involved before approving the contract.