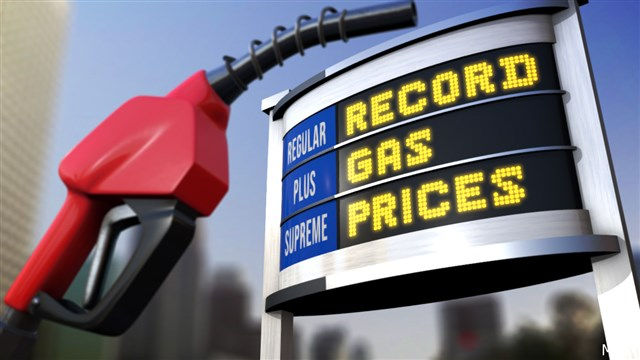 City Above the Clouds Offering Much Higher Charges at the Pump

Are Woodland Park consumers getting  stiffed over high gas prices in their own local community?   And why is there so much inequity at the pump these days in the Teller high country?

These are questions that have been voiced by many residents as prices at fuel outlets in  the City Above the Clouds are drastically higher than gas stations in Colorado Springs or other Teller County towns ,such as Divide, Florissant and Cripple Creek.

Many people claim that when gas prices all over the country started lowering their prices about a month ago, the gas stations in Woodland Park seemed to be the last to change prices.

Even though the issue has just recently become a major topic on  local social media pages, this trend has been occurring for some time. Last spring, cities in other places in Colorado, which are known to be more expensive than Woodland Park, such as Winter Park, Breckenridge, and Frisco, all had lower gas prices than Woodland Park, even while their busy ski season was still going strong.

The two gas stations in Divide and the Conoco in Florissant both had gas prices listed at $4.19 per gallon. Evergreen Station south of Florissant and the Gas N Roll in Cripple Creek were both selling regular grade fuel for $4.39 per gallon.

In the past, industry experts and business operators would admit that Woodland Park has higher gas prices than Colorado Springs and attribute these to the delivery expenses up into the mountains. However, many have pointed out recently that it doesn’t make sense that towns further up the hill,  like Cripple Creek and Divide, have cheaper prices than Woodland Park since the same distributors are often used.

Industry experts and local business operators have taken the Fifth on this issue and have mostly declined to comment on this inequity of gas prices in Woodland Park.

TMJ News did some investigating to try to figure out exactly why gas prices in the City Above the Clouds were around 50 cents per gallon higher than anywhere else in the region. But, employees and managers working at the local gas stations said that they were not allowed to speak to the press about company business or gas prices.

TMJ News then contacted Hillary Hallard with the EG Group that owns the two Loaf N Jug gas stations in town and received no reply. TMJ  News also spoke with Eva Madrigal from the Alta Convenience corporate office and she said that she had no knowledge of how gas prices were set or any control over how prices were determined. When asked for contact information for someone who was in charge of gas pricing, Madrigal said that she was not allowed to give away that information.

One local gas station manager (who asked to not be named), said that the higher prices could be due to the fact that Woodland Park is tourist town. The manager also pointed out that prices in Divide were possibly cheaper due to limited competition because there are only two gas stations in that town.

The manager said that Woodland Park has more gas stations and these outlets all have similar  prices. This could be a factor that has prevented them from dropping.

According to Debbie Miller, president of the Greater Woodland Park Chamber of Commerce, it is unclear as to what exactly has caused the local disparity in gas prices. But she did say that supply and demand comes into play and that each gas station owner has the right to set whatever prices they want within certain legal limits.

She also explained how competition drives prices and said that if a gas station across the street from another one lowers its prices, then the other one is forced to do so.  “When you look up here and look at the stations within the city and they are all within 10 cents and nobody has dropped theirs, I don’t see that there is an incentive to drop prices,” Miller said.

Local business owners have said that they have heard many complain about the city’s high gas prices. “It is impacting everybody,” said Elijah Murphy the owner of the Historic Ute Inn said. “I have heard from people that they don’t have enough money to fill up their tank every week.”

Tanner Coy, president of Tweeds Fine Furnishings, also said that he has heard many people coming into town commenting about the high gas prices. “It doesn’t seem to be as big of a deal right now as it was a few weeks ago when gas prices were higher,” Coy said. “I can tell you that for those of us that drive the pass from Colorado Springs every day, I don’t fill up in Woodland Park.”

Teller County Commissioner Dan Williams said that he has heard complaints on social media, but he thinks the prices will eventually even out since  40 percent of people in Woodland Park that commute down the Pass every day have been buying gas in Colorado Springs. “Really, the market is working and people are buying their gas somewhere else even though we don’t really want to do that,” Williams said. “I think the message will get out. The local government doesn’t have any control over gas prices, but we all have control over how we spend our money. It could be a supply and demand thing because who knows what they paid for the gas and they have to get it out of the pump. But, I think things will normalize over time.”