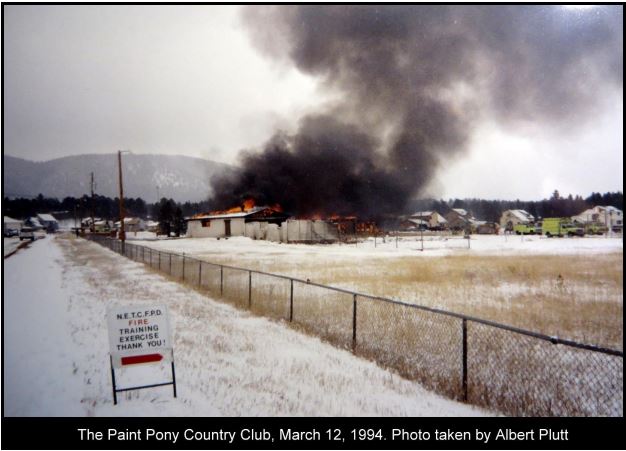 One story often not revealed is how Woodland Park once housed a famous resort where people would visit from across the country.

The resort featured a heated swimming pool, a nine-hole golf course, an air strip, and a fine dining restaurant.

In fact, the resort was so popular at one point the city of Woodland Park once launched a campaign to attempt to purchase the property and turn it into the town’s first publicly owned country club. However, the deal fell through and the resort ended up getting shuttered in the 1970s, and then it was turned into the Woodland Park Community Church in the 1990s.

According to an article written by local historian Steve Plutt, entitled “James Darwin Elder Jr. and the Paint Pony Ranch,” the history of the property started in 1877 when Civil War Veteran Anthony Eiswerth and his wife Sarah settled on a 160-acre piece of land in the area. Anthony died in 1879 and the homestead was established in Sarah’s name in 1882.

As time went on, Eiswerth bought up joining plots of land and in 1950 around 560 acres were purchased by James Darwin “Dar” Elder Jr. and his wife Trulie. The Elders had spent the last two years managing ranches in the state and they had always been looking to purchase their own.

When they first purchased the property, the Elders started removing the old buildings on the land and eventually built their family home on the north side of the property in 1951. As soon as the Elders moved to Woodland Park, they immediately became involved in the community as Dar became the first president of the local Lion’s Club.

The same year they moved into their new home, Dar opened up a real estate office and began to build house on his property and another piece of land located south of Kelley’s Road. For the next few years, the Elders worked on developing their new Paint Pony Ranch property with plans to one day build a country club and a nine-hole golf course on the property.

On June 22, 1958 part of the Elders’ dreams came true when they officially opened their Paint Pony Country Club with excellent kitchen facilities, a large dining room, regulation tennis courts, and a heated swimming pool. Then on July 4, 1961 the Elders opened their brand new nine-hole golf course as a special Independence Day celebration.

During the 1960s the new Paint Pony Resort became a very popular spot in Woodland Park. Many organizations held meetings, banquets and award ceremonies at the location.

The high school would hold its senior prom and the local teen club would hold regular dances there. The swimming pool was used by people in the surrounding camps and it was open to the public on select days.

At one point, Elder even built a small air strip where people from out of state could land their planes at the resort. A tragedy for the area happened on June 20, 1964 when Ed Tillman of Crystola crashed his plane and died when he was trying to land on the strip.

Plutt also told a story of his longtime family friend Bob Dickson who was one of the first people to purchase a house in the Paint Pony Ranch subdivision when he bought the first house built in the area in 1951. Dickson would land his Super Cub on the air strip and then taxi it across the golf course to his home on Kelley’s Road.

The Elders then sold the resort to Jerry and Mary Linda Mills, who owned other ranches in the area in 1965. The resort ran for a few more years when it was put up for sale in 1971. The property was then bought out by a number of the club’s members and was operated by a board of directors.

The club stayed open for a few more years on a seasonal basis, but the golf course and several buildings were starting to get worn. The resort closed for the winter in 1975 and they advertised a reopening on May 1, 1976, but it never happened.

That summer the leaders of Woodland Park and the local Chamber of Commerce put up a bid to purchase the property and turn it into a publicly owned country club. However, the residents did not approve of the idea and the grant they were trying to secure from the El Pomar Foundation fell through.

Then in 1978 the club had new ownership and reopened as the Woodshire Inne. The new owners renovated the clubhouse but the swimming pool and golf course remained in poor condition.

The Woodshire Inn didn’t even last a year before the golf course closed and the property was sold to Bill Mahaffey. Mahaffey then turned it into the Williams Restaurant based on an establishment of the same name in Colorado Springs.

The restaurant boasted fine dining in a country club setting and it was famous for serving large bowls of cold shrimp. According to local historian Larry Black, the restaurant was Woodland Park’s last popular destination eatery as people would come from all over just to eat there.

The restaurant shut its doors in 1984 when the property was sold. In 1993, the story of the Paint Pony Ranch and Resort came to an end when the landowner Dean Rawson traded the land to the Woodland Park Community Church for 1.1 acres and church buildings on Henrietta and Park Streets in Woodland Park.

Then on March 12, 1994 the local fire department conducting a training exercise where they burned the former Paint Pony Clubhouse to the ground. A circus was held on the property that October and the Woodland Park Community Church opened their new building on the site in March 1995.