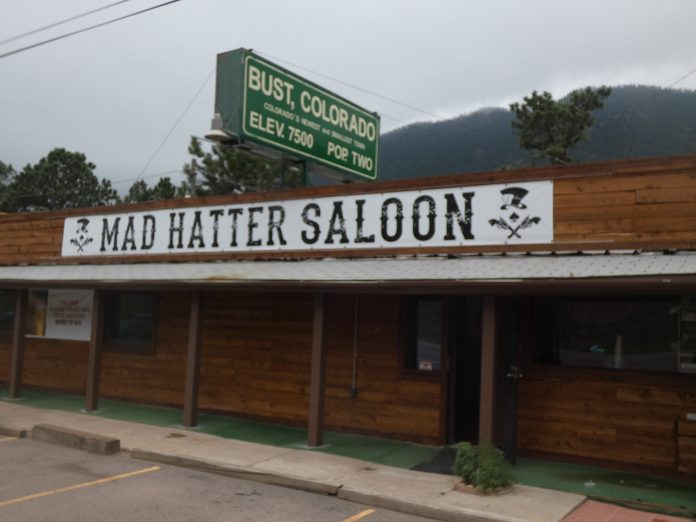 Over the last couple of years, the Ute Pass region has experienced a slew of restaurateurs opening up new culinary digs in the high country.

Despite the tough hit the industry took in 2020 and 2021 due to the pandemic, new eateries seem to be popping up all over Teller County and the surrounding area, boasting some unique themes and distinct features.

Last month, the region saw yet another restaurant open up when The Mad Hatter Saloon opened its doors in Bust, CO,  between Cascade and Green Mountain Falls off Hwy. 24. The new “Alice in Wonderland”-themed eatery has already seen skyrocketing sales and many positive reviews on social media pages.

The new business owner, Dennis Dankert, said that he has always loved Alice in Wonderland and especially the Mad Hatter character.  He explained how the mad hatter character was derived from an old saying, “you are mad as a hatter.”

In the 19th century, it was common practice for people to use a mercury-based compound to make fine hats. Due to long time exposure, the people who made the hats (the hatters) would develop symptoms of mercury poisoning that made people label them as crazy.

Dankert said that he wants to honor the famous character by decorating the saloon with paraphernalia from hatters of that era. For now, The Mad Hatter Saloon sports its theme with a slew of Alice in Wonderland-themed artwork on the walls from the Lewis Carroll masterpiece that has been  showcased on Broadway, in the movies and even in the 1960s with a psychedelic rock ‘n’ roll song, and now with a local restaurant. 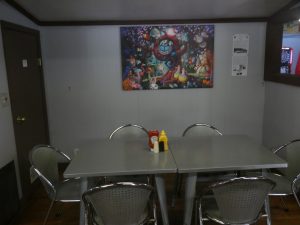 The owner said he opened the saloon to be a hangout spot for people of all ages. “I wanted to make a place where people could socialize,” Dankert said. “That’s why we have fire pits and things like that. I have noticed groups of people out there socializing. Sometimes, around one fire pit there might be two or three couples that don’t know each other, but they sit out there and hang out for the whole night. So, creating a place for people to gather and socialize is what I’m trying to evolve into and it seems to be coming together.”

The new saloon is equipped with two fire pits with outstanding views of the mountains and a large covered area for seating. The back game room hosts two dart boards, a pool table, and an arcade game where people can play PacMan or Galaga. 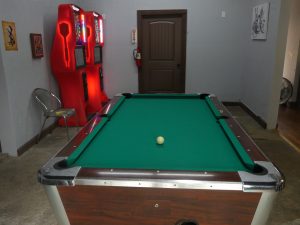 The fire pits are surrounded with custom-made ski chairs with a variety of themes. The outdoor section also features a small pile of rocks with paint so customers can paint a rock while enjoying the views outside that they can come back and find at another time. 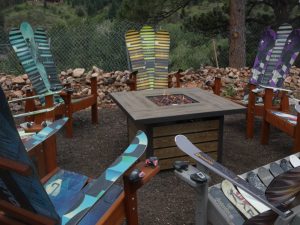 For the menu, Dankert said that he originally wanted food to be served like they do on the beach where he grew up with quick, in-and-out service. He first had the idea of creating a menu where customers could order different recipes and have them with either a bratwurst or hot dog.

But then, he decided to add a locally sourced burger to the options. “I was just going to do dogs and brats, but then I figured why not add a burger into the mix as well,” Dankert explained. “People seem to like that taste. They can get a Southwest burger, a New York burger or a Chicago burger because it has the same ingredients on it.”

Dankert said that his wife Julie has most of the restaurant experience between the two, but he did bartend in college and he tended bar locally for the last few months. “I am a social butterfly,” Dankert said. “You can drop me in the middle of anywhere in the world, and by the end of the night I’m hanging out with people.” 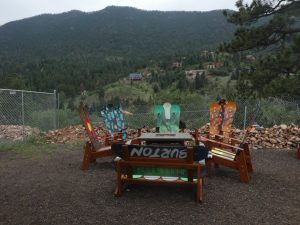 Dankert has also focused on providing a good selection of only local tap beers and local wine selections. In the future, Dankert said that he plans on adding a Taco Tuesday special and at the end of August he plans to serve breakfast on Fridays, Saturdays, and Sundays that will offer a bloody Mary bar.

The new owners plan to add several televisions for sports enthusiasts in the near future. He also said that they are planning on holding live music events at the new venue. For information on the Mad Hatter, call  321-848-5460.