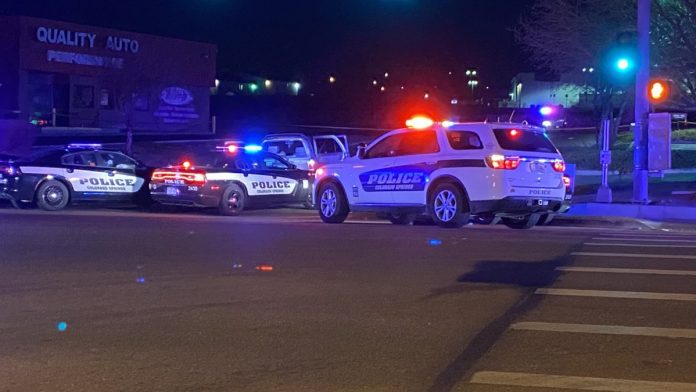 On April 11, 2022, the Manitou Springs Police Department received a report from a bartender at the Royal Tavern, located at 924 Manitou Avenue, that an intoxicated individual had brandished a firearm at her. The reporting party indicated this person subsequently left the bar and walked eastbound down Manitou Avenue. Officers Levi Hoover and Jeffrey Schuelke, the initial responding officers from the Manitou Springs Police Department, located an older white male who matched the description given by the reporting party in the 800 block of Manitou Avenue. The male was later identified as Wilford Robert Deweese. Mr. Deweese refused the officers’ requests to approach to discuss the matter, instead remaining partially concealed in the 800 block of Manitou Avenue. In several verbal exchanges with the officers, Mr. Deweese indicated he had been present at the Royal Tavern but continued to refuse the officers’ directions to approach them further to discuss the incident. At various points during this exchange, Mr. Deweese refused the officers’ commands to keep his hands up, telling the officers that he was recording them with his phone while also moving his hands in the direction of the waistband of his pants. At one point, the officers made an effort to move closer to Mr. Deweese to effectuate contact but retreated when Mr. Deweese told them to not come any closer and began reaching into the pocket of his pants.

After over ten minutes of this fruitless exchange, additional law enforcement units from the El Paso County Sheriff’s Office and the Colorado State Patrol arrived on scene and assumed additional positions of containment around Mr. Deweese. Prior to arriving on-scene, Deputy Daniel LeBaron responded to the Royal Tavern and confirmed the felony menacing incident and specifically that a handgun was involved. Based on the lack of success of negotiating efforts and the continued concern for community safety, another responding deputy, Ronnie Hancock, displayed his K9 partner Jinx as a more audible and visible demonstration of the necessity of complying with officer commands. Deputy Hancock then assumed primary communication responsibilities with Mr. Deweese, and multiple additional commands were issued for Mr. Deweese to show his hands and come towards the officers. During this period of time, the threat to public safety increased as citizens traveled down Manitou Avenue behind where the police containment line was located and gathered in the windows and balcony areas in the 800 block of Manitou Avenue. For eight additional minutes, Deputy Hancock continuously repeated his commands for Mr. Deweese to come approach the officers with nothing in his hands, including multiple warnings that unless Mr. Deweese complied, the K9 would be released. During this time, Mr. Deweese was utilizing a cellular device with a relative and stated he was planning to shoot the K9. Finally, with no further change in the posture of Mr. Deweese, Deputy Hancock deployed K9 Jinx and officers began a simultaneous coordinated movement to contact Mr. Deweese. As the K9 ran towards the base of the walkway where Mr. Deweese was located, Mr. Deweese pulled a handgun from his pocket and fired at K9 Jinx, fatally striking him in the head. Mr. Deweese then fired at officers as they moved down the walkway, and in response, Officers Hoover and Schuelke, and Deputies Hancock and LeBaron returned fire with their duty weapons. Mr. Deweese was struck approximately twenty-two times, incapacitating him, and causing him to drop to the ground. Deputies and officers immediately began life saving efforts on Mr. Deweese utilizing their department issued medical kits. Manitou Springs Fire Department personnel were staged adjacent to the scene and assisted within minutes. However, they were unsuccessful in reviving him. Mr. Deweese ultimately succumbed to his injuries.

Crime scene investigation personnel subsequently responded and while cataloguing the scene, a Sig Sauer P365 9mm pistol was recovered in close proximity to Mr. Deweese with its slide locked back, indicating complete expenditure of ammunition. 9 Hornady 9mm shell casings were also recovered in the immediate vicinity of Mr. Deweese. A forensic examination of the firearms evidence recovered from the scene conclusively identified that it was Mr. Deweese’s Sig Sauer 9mm pistol that fired the fatal shot killing K9 Jinx.

Mr. Deweese died as the result of multiple gunshot wounds caused by the bullets fired by responding law enforcement officers. The use of deadly physical force by Officers Hoover and Schuelke and Deputies Hancock and LeBaron was justified. In making this determination the facts of this case must be analyzed in light of CRS 18-1-704 and CRS 18-1-707.

(2) Deadly physical force may be used only if a person reasonably believes a lesser degree of force is inadequate and (a) The actor has a reasonable ground to believe, and does believe, that he or another person is in imminent danger of being killed or of receiving great bodily injury.

C.R.S. § 18-1-707 sets forth the standard for use of physical force in making an arrest or in preventing an escape:

(3) A peace officer is justified in using deadly physical force to make an arrest only when all other means of apprehension are unreasonable given the circumstances and: (a) The arrest is for a felony involving conduct including the use or threatened use of deadly physical force; (b) The suspect poses an immediate threat to the peace officer or another person; (c) The force employed does not create a substantial risk of injury to other persons.

In addition to the analysis above, one final relevant subsection of CRS 18-1-707 was satisfied in concluding that the use of deadly force by Officers Hoover and Schuelke and Deputies Hancock and LeBaron was justified. Subsection (4.5) states, “Notwithstanding any other provision in this section, a peace officer is justified in using deadly force if the peace officer has an objectively reasonable belief that a lesser degree of force is inadequate and the peace officer has objectively reasonable grounds to believe, and does believe, that he or another person is in imminent danger of being killed or of receiving serious bodily injury.”

After completing a thorough review of the facts and evidence, Colorado’s 4th Judicial District Attorney’s Office has determined the use of deadly physical force by Manitou Springs Police Officers Hoover and Schuelke and El Paso County Sheriff’s Office Deputies Hancock and LeBaron was justified based on all the facts and circumstance of this case under the law of the State of Colorado.