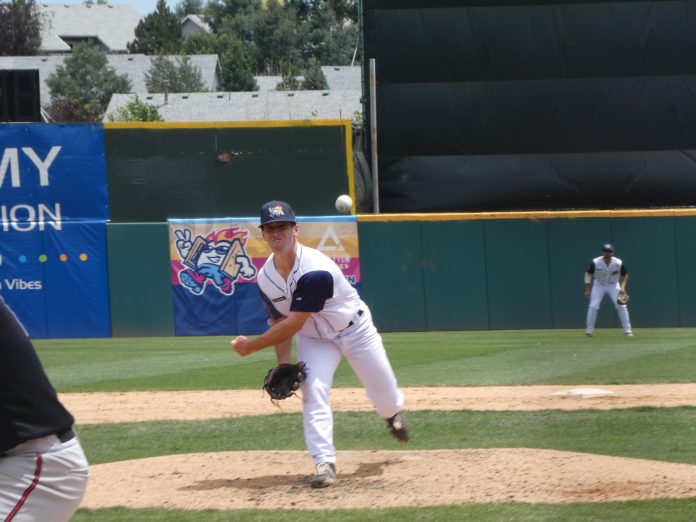 When the Rocky Mountain Vibes first started their season, they looked about like they did last year—and that was pretty bad.

During the 2021 season, the Vibes finished as the worst team in the Pioneer League.

For the 2022 season, the Vibes had an all new management and marketing team that was ready to bring winning ways to the Vibes’ UCHealth Park in Colorado Springs. But after remodeling the stadium and improving the schedules to provide more deals and events, the Vibes started the season still losing games.

But then about halfway through the season, the owners and general manager noticed that the team needed a drastic change in order to be successful. To start, the Vibes’ management had to re-negotiate the contract they had started last year the Mexican Baseball League team the Acereros de Monclova.

When the contract was first drafted, the Vibes were the farm team for the Acereros and their coaching staff and players consisted of mainly men between the ages of 16 and 24 mostly hailing from Mexico. The contract was recently rewritten to allow the Vibes to use players from the Mexican system and recruit their own players and coaches in the United States.

The Vibes then hired an all new coaching staff and replaced many of their players. And ever since the team’s major overhaul, the Vibes have been probably twice as successful.

During the team’s first home stand after the change, the attitudes on the field amongst players, coaches and fans had changed. And, the best part is that the Vibes started looking more competitive and winning games.

In fact, the team’s record has shown the change. Before the Vibes revamped the team, their record was 8-20. They now have a 14-30 record meaning that they have gone nearly .500  since the change, marking a major improvement.

With the new team came a slew of new star players that the fans have begun to love. The team used trades and acquired players from other Pioneer League teams via free agency during their overhaul.

Rookie outfielder Gio Diaz season has been leading the team at the plate with a 0.417 batting average. Diaz has picked up a total of 41 runs and 73 hits.

Rookie outfielder Domonique Hernandez has been a key player since the beginning of the season. Hernandez has a 0.347 batting average; 59 hits and he has knocked away six homeruns.

Rookie infielder Ulysses Cantu has also been a major help on the team in the 41 games he has played. He leads the team with seven homeruns and he has a batting average of 0.370.

However, probably the biggest struggle for the Vibes over the last two seasons has been their pitching. Last year, it seemed as if the Vibes rotated through a new pitcher every inning.

There were some games last year that towards the end of the game the Vibes started putting their shortstops and third basemen on the mound after running the bullpen dry.  It seemed like just about every Vibes player last year had a chance to show the coaches what they could do on the mound at some point during the season.

This year, the pitching was the Vibes’ biggest weakness in the first half of the season. After the team’s major overhaul, the released and added several pitchers which has helped them be more competitive and give their bullpen a little more depth.

The Vibes just finished a stint on the road against the Ogden Raptors. The team lost the series overall but they didn’t get swept as they did pick up a couple of key wins.

The Vibes continue their 2022 season this week with a three-game home stand against the Northern Colorado Owlz starting on Tuesday. This week the Vibes celebrate their Hispanic heritage by playing as their alter ego team Las Lloronas.