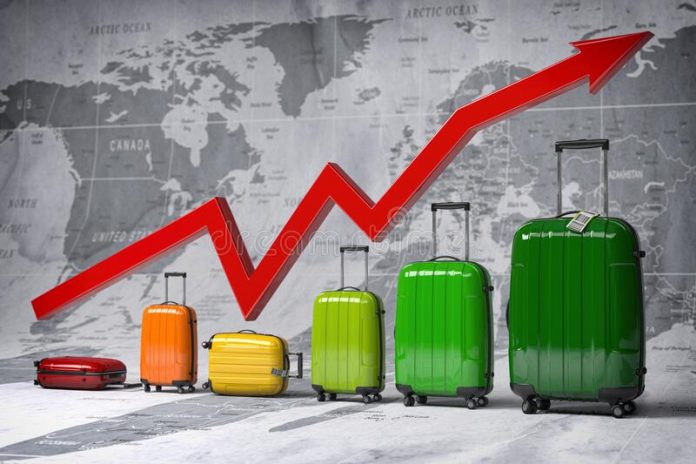 Summer Season Off to a Bullish Start

Traffic jammed the highways during the July 4th holiday weekend, with locals and visitors not showing any hesitation in making their treks towards favorite campsites and recreation outings throughout the state, region and even across the country.

The desire to get out after months of being restricted by the COVID crisis still prevails.  Although the pandemic still is not totally behind us with reports of some business operators getting the latest COVID bug or related variant, this fear has not slowed down the activities of locals like it did a year ago.

Festivals and good times abounded in Cripple Creek, Woodland Park and Green Mountain Falls last weekend, with the communities celebrating the Fourth in a diverse style.  Hefty crowds were reported for the Old Fashioned July 4th festival at Memorial Park and for the fireworks show in Cripple Creek. Expectations remain high for this evening’s (July 5) Symphony Above the Clouds bash.

The big question:  Will the skyrocketing gas prices put a dent in visits to area attractions and casinos throughout the summer and limit those attending special festivals/

Statistics appear so far to favor this theory, with local casinos experiencing a winning hand as far as overall betting volume and adjusted gross proceeds.  Much of this rise in betting is a byproduct of the movement to eliminate limits on single-bet wagers. This could bring about more high-roller players and make card games and table action more enticing.

Attraction numbers are also fairly good for this time of year, and the region has survived earlier fears of big fires and natural disasters, at least so far.

Visitation for the Green Box Arts Festival in Green Mountain Falls, capped by the opening of the new Skyspace attraction, were at their highest level in some time, according to Green Box representatives. Showings for the GMF Skyspace shows were sold out throughout the two-week long festival, for the James Turrell light and space attraction, the first one of its kind developed in  Colorado.  Proponents describe it as a rare open eye to the sky and stars, and part of a pilgrimage experience, while some locals compare it to a unique mountain-like planetarium.

Despite various views of the new facility, this could open the door for a new caliber of art and Skyspace travelers to the region.

Cripple Creek, Victor and Woodland Park, meanwhile, are bracing themselves for a festive summer. Some of the forthcoming festivals include the 91st annual Donkey Derby festival in Cripple Creek and the Salute to American Veterans Rally in Woodland Park.

The festival action in the district kicks into high gear next weekend for the Victor Gold Rush Days.

The Rags to Riches melodrama at the Butte Theater is scheduled to kick off on June 24.

But while officials are expressing much optimism, they are cautious about expectations with the lingering fear of continual high gas prices.

“That is the big hurdle we are facing,” admitted Salvato.  Questions marks persist about how huge gas prices will affect summer tourism and gaming.

Still, most leaders remain quite optimistic. A variety of theories abound about the impact of high gas prices. Some fear this could curtail the traveling habits of Coloradoans, while some believe it may create more trips within the state.

The city of Cripple Creek, though, if off to a good start. Another non-gaming attraction, The Mercantile retail shop, opened its doors on July 2. This shop, which will eventually feature a bakery and take-out food items,  currently sports gifts, household wares, local artisan products and more. It  follows the opening of the Gold Camp Cafe last spring.

These expansion efforts are being pursued by Jeff Hellner, who owns a variety of businesses in the Front Range. Part of this non-gaming expansion also involves the opening of the District Saloon later in the year.

Plus, speculation abounds regarding activity at a variety of buildings on the east section of Bennett, across from the Double Eagle, including the Ralf’s Breakroom and Crystal Canyon buildings.

For the first time in years, development in Cripple Creek is occurring at a torrid place, at least on paper.

Work continues too on the Chamonix resort, a 300-plus-room, nearly 10-story hotel, multi-level parking garage and full slate of planned four-star amenities, being constructed by Full House Resorts, owners of Bronco Billy’s. In fact, this project has commanded much interest among visitors and to the community.  It is slated to open by July 2023, and appears scheduled to meet this deadline.

Ground-breaking could occur too this year for a 101-room boutique hotel proposed by Triple Crown Casinos, which will feature a general store and a variety of non-gaming amenities.

In addition, the city of Cripple Creek has displayed an aggressive stride toward developing more affordable housing. Since offering a hefty amount of development incentives, the city has experienced plans for close to 40 new housing units, according to Special Projects Director Jeff Mosher, with about half of these making permit requests.

“We need to grow the community,” said Salvato, who sees all of these projects, helping to make the Cripple Creek district more diverse and less reliant on the gaming industry. As the number one community goal, he cites the importance of getting more people to live in Cripple Creek.

The city may further raise the ante for further projects by getting aggressive in grants to help pave the way for better infrastructure. One of the development hurdles has been aging water and sewer lines

That scenario could soon change, as the city is pursuing some ambitious grant opportunities with the USDA. “We look at this as an opportunity,” said Salvato.

But as with most projects in Cripple Creek, speedy construction is often difficult and the supply-chain shortage nationwide could have an impact.

Politically, the city may take a few wagers, with the council most likely okaying plans for proposing a one-cent sales tax hike on the November ballot. A decision on this issue could occur at the council’s last meeting in July.

Another idea being mulled is the possibility of the city opening the door for retail marijuana. But to date, no initiative on this proposition has been submitted to the city clerk’s office. This type of pro-cannabis movement would require local voter approval.

Denver Broncos Square Off Against Houston Texans in Home Opener