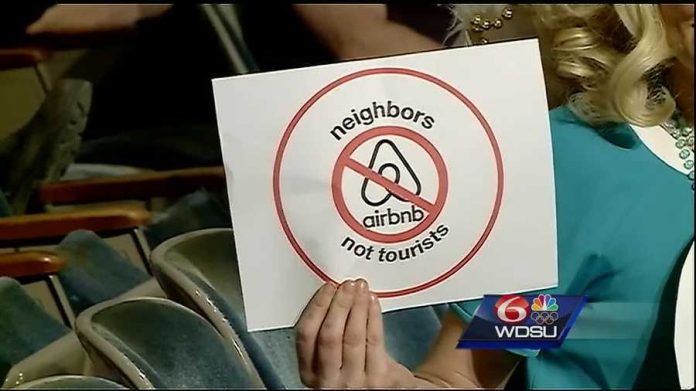 Why should Woodland Park and Cripple Creek have all the fun regarding the  ongoing controversy over short-term rental properties (STRs), often referred to as  vacation homes?

STRs are defined as units, rented out for 30 days or less, often obtained through popular internet sites, such as Airbnb and VRBO.

The ongoing brawl over the handling of STRs has now moved down the Pass and encompasses the tourist-friendly hub of Green Mountain Falls. This issue has already been played out in both Woodland Park and Cripple Creek, with plenty of heated discussions on taking the best path forward and suggestions of future regulations.

Besides opting to cancel its current contract with a major contractor for a paid-parking program (see related story), the topic of STRs grabbed the spotlight for a brief period during public comment at last week’s regular GMF Trustees meeting.  But at the outset, the trustees waved the cautionary  flag by agreeing to postpone any action until it held a designated public meeting on this hot topic.

The trustees were prepared to impose a temporary moratorium on STR properties, which are quite popular in GMF. The town has a current cap of 60 STRs, a limit that it is getting close to reaching

But at the advice of the town’s legal counsel, the elected leaders stopped short of enacting a moratorium, or proposing any type of STR-related measure.

GMF Mayor Todd Dixon stated that the town hopes  to achieve a balance, and favors having an overall workshop on this topic.  As in most communities in Colorado, there is a clash between those property owners who want to use their dwellings as vacation units to generate additional income, and those who are worried about preserving the integrity of residential neighborhoods and cite quality of life concerns.

Plus, the issue of a lingering housing shortage comes into play, with leaders across Colorado worried about STRs, driving up the cost of real estate and adding to the woes associated with affordable housing.

A variety of state measures on STRs have been proposed, with no overall consensus.

But on the other side of the coin, real estate representatives say STR properties represent a key boost to the economy.  They can also provide income for local governments. Dixon stated that the town generates  about $100,000 in revenue a year from STR, properties, which is significant for GMF.

At last week’s meeting, long-time resident Kathy Snow addressed the trustees, and urged the panel to consider enacting additional regulation regarding STRs. She expressed concerns about preserving the integrity and character of  the residential community  with the advent of more STRs.   She cited the rules applied in Boulder as a good example for steps to consider.   “STRs can create adverse impacts,” she warned.

Snow favors creating more STR regulations so it works well for the community as a whole.  She doesn’t object to the 60-cap limits, but believes that certain parts of the residential core of GMF currently have too many STRs.

In a previous meeting, Rocco Blasi, a former planner commission member and chairman of a previous trails committee, shared previous concerns. He  argued in favor of keeping the 60-limit cap in place and not exceeding this point.

At the current rate of STR applications, this limit could become a subject of contention.

However, owners of STR properties and lodging establishments note that the town has historically been a hub for vacationers. Several pro-STR representatives attended last week’s meeting, including a former city council member, but didn’t address the board, when it learned the issue was put on hold.

The subject is a hot one across the region. The Cripple Creek City Council recently held a lively workshop on the topic and debate on ways to end their current moratorium that expires in mid-September.

In Cripple Creek, the main issue deals with the lack of affordable workforce housing.

According to City Administrator Frank Salvato, the council now appears ready to address an overall ordinance on STRs, which sets definite rules for the running and operations of these properties, such as having a property representative in the area available if problems occur with these units.  Distance requirement between STRs would also be implemented.

These rules would permit the town to expand its current inventory from 28 to  35, with small increases allowed annually.

But under the city’s proposed STR compromise, future applications would  be handled by the staff, and would not require a city council hearing.  As a result, neighborhood opinions could not halt a STR application,  if all the guidelines are met.  The other alternative is for future STRs to be zoned in specific areas.  But this alternative doesn’t appear to be favored by the city council, according to Salvato.

The council may  address a formal  STR plan at its next meeting, set for June 15.