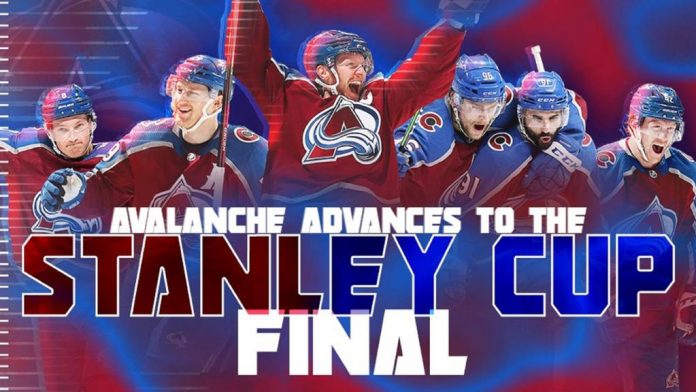 The big showdown for Saint Stanley, dubbed by some as the most prized title in sports, will start this Wednesday at the Ball Arena in Denver. Get ready to cheer on the Colorado Avalanche and their quest for another world championship.

The Colorado Avs will knock heads with the Tampa Bay Lightning, which clinched the Eastern Conference title on Saturday. The Avs have their work cut out for themselves as the Lightning have been in the Stanley Cup finals now for three straight years.

Early last week, the long-awaited season dream came true for Colorado Avalanche fans in the area and across the state. Many insiders have been saying all season that this could be the year that the Avs take home the Stanley Cup, and the team is one more step towards making it happen.

It is a contest of speed, baby, and the Avs are probably the quickest team on the ice, thanks to some deals engineered by general manager Joe Sakic in the offseason.

On June 6, the Avalanche officially sealed the deal when they beat the Edmonton Oilers 6-5 in overtime in the Western Conference Finals. The Avs’ latest victory was their fourth win in their series sweep against the Edmonton Oilers, which earned them the chance to play in the Stanley Cup Finals.

The latest victory was especially sweet as the Avs faced a several goal-deficit,  going into the final period and netted an amazing come from behind victory.

They won in overtime, scoring a somewhat controversial goal, but a final review of the play confirmed the victory.

It was a great win, as it showed the Avs could prevail when they didn’t have their best stuff. During the end of the second period, the Avs looks somewhat frustrated, but that feeling shortly changed to elation.

Yes, the raving obnoxious mouth of Wayne Gretzky,  now a hocky analyst (and a lousy one at that) for TNT and former Canadian star,  was put to rest. Wane, who obviously  clearly favored the Edmonton Oilers, was silenced. Gretzsky struggled to say some positive things about the Avs at the close of the sweep, and you could tell it was tough for the great one, who was choking on his own words.

Wayne and his beloved Canadian fans were muted.  Maybe Wayne should spend more time on the golf links with his nutty son-in-law, Dustin Johnson, who has made major sport headlines himself by aligning himself now with a rebel  professional golf tour, financed by the regime of Saudia Arabia.

Crazy stuff,  but it is part of the big money trend now that rules pro sports.

As soon as the news of their victory surfaced, Av fans were absolutely thrilled. Their recent routing of the NHL post season marks the first year the Avalanche has been to the Stanley Cup Finals since they won the championship in 2001.

For the last week, Avalanche fans have been enjoying the team’s week off while anxiously awaiting the NHL Eastern Conference Finals to see who the Avs will face. At the time this article was written the New York Rangers and the Tampa Bay Lightning were still fighting it out in the conference finals.

As of press time, Tampa Bay was leading the series 3-2 with  game seven tentatively scheduled for Monday. Both teams have looked great in the post season meaning that no matter who wins the series, the Avalanche will have their work cut out for them.

Seeing as how both teams have looked tough all season including the playoffs, Av fans don’t really seem to have a favorite pick for an opponent. No matter who the Avs play, their fans know that the team must stay focused to win the series and take home the trophy.

The lingering question:  Will star Avs forward Nazem Kadri return to the ice? Nazem, if you don’t remember, was injured following a cheap shot by Edmonton in game three. The infraction that they incurred was minor for the blow that put Kadri out of the series.

For the last week, Colorado officially earning the chance to play in the finals has been a bittersweet moment for the team’s fans. As soon as the Avs’ victory was announced, many fans were thrilled about the chance to finally get to watch a Stanley Cup Finals game in Denver.

However, many people hopes and dreams were shattered last week when they went online to look up prices to watch a home match during the series and found out that tickets were priced at around $1,000 for nosebleed seats in Denver’s Ball Arena.

But, local hockey fans shouldn’t let the surprisingly high ticket prices ruin the moment for them. Those who do not wish to let go of a small fortune to watch a live Stanley Cup game can stay in the Ute Pass region and enjoy the game at one of the area’s many sports bars.

The Blue Moose Tavern in Green Mountain Falls remains to be a local favorite spot to watch sports of all kinds. And during hockey season there won’t be as many annoying Chief fans as there are at the bar during football season.

In Woodland Park the Historic Ute Inn is back open and ready to cater to Avalanche Fans during the Stanley Cup Finals. The Stuft Food Emporium and Peak View Barbecue are two other local saloons that offer big screen televisions for sports viewing.

In Divide, Avalanche fans love to enjoy the game at McGinty’s Wood Fired Pub. This local sports bar could possibly be the home to the most Av fans in Teller County. Russ’ Place is also a popular place to watch the game on one of their many big screens.

For those in Cripple Creek, Av fans can be assured that every casino will be showing all of the matches in the Stanley Cup and sports enthusiasts will also have the chance to place bets on the big games. The Creek Restaurant is also a great place to watch the Avs as they open up their upstairs bar during games so people can watch their teams play on their giant 80-inch screen.

And for Avs’ jerseys, make sure to check out Creations Everlasting, one of the prime retail shops in Cripple Creek, which specializes in all kinds of unique merchandise for professional sports teams.