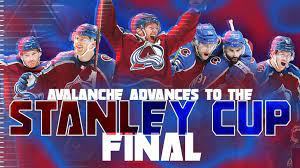 This year could be THE year for Colorado hockey fans!

It has been said many times before, but Colorado Avalanche fans this year know that it is even more serious now that the team appears headed to the Stanley Cup finals.

Currently, it is truer than ever that this year could be the year that the Avs capture the big trophy prize, considered one of the most elite in professional sports.

As of press time, the Avs were putting it to the Edmonton Oilers in the series by winning their first three matches, putting the Oilers in a difficult and probable impossible hole to climb out of.   During the first two games of the conference finals, the Avs seemed to dominate the Oilers.

Colorado even tied their record with the most goals in a playoff game at eight during their first match against the tough Canadian team.

On Saturday’s game, the Avs’ defense showed their amazing strength, as they won by a 4-2 margin. But unfortunately, they suffered a key injury of star Nazem Kadri, due to a cheap shot by the Edmonton “Skumheads.” Nazem may be out for the playoffs. Hopefully, the NHL will take appropriate action and the Edmonton fans will get muted.

But, (as many fans have been saying all year) this season is different. In fact, after the Avalanche beat the St. Louis Blues in game six of the second round, they officially advanced to the Western Conference Finals for the first time in over 20 years.

The victory came the best for Avalanche star Nazem Kadri as he was the victim of racial slurs and death threats after he accidentally injured the Blues’ goalie during a game in St. Louis. Kadri responded to the threats and bashes from the locals by scoring a hat trick shortly after the incident and ultimately leading his team to a big victory.

Once the Avs started playing Edmonton, it seemed as if they were on fire. It could be that the team’s speed is just too much for the Oilers to handle as the Avalanche seems to be constantly firing shots at their goalie.

During the Avs’ first matchup against the Canadian conference semi-finalists, the play on the ice was high speed and kept those watching it on their toes. The Avalanche were quick to score, and when the Oilers scored, the Avs always promptly answered.

Even though the final score was 8-6, Colorado actually dominated the entire game. At one point, the Avs were up by four goals until the Oilers came back at the end to shorten the lead.

During their second bout, it was all Avalanche this time and no chance for the Oilers to strike any black gold. The Avalanche seemed to quickly dominate their opponents and ended up with a four to nothing shutout victory.

The surprising news was that the Avs were forced to play their backup goalie Pavel Francouz and he earned an impressive shutout. At the end of the game, Av fans could be heard shouting the second starting goalie’s name in appreciation.

Even though it seems as if Kadri has been the main player in the spotlight during the playoffs, many other Av players have also been stepping it up during the post season. At the time of Saturday’s game, Cale Makar led the team in most points with four goals and 13 assists.

Nathan McKinnon  had earned 16 points during the playoffs (prior to Saturday’s game)  and Mikko Rantanen racked up 15. In fact, Kadri, Gabriel Landeskog, and Devon Toews have also all contributed to more than 10 points during the 2022 post season.

The Avs were scheduled to play game four on Monday night in Edmonton. If the Avs proceed to the Stanley Cup finals, as expected, they will take on either the New York Rangers or the Tampa Bay Lightning.

Either way, it will be a joy for Colorado sports fans to finally get to see one of their state’s professional sports teams play in a pro league championship. Denver itself hasn’t had one of its pro teams make it to a final series or match since the Denver Broncos won the Super Bowl in 2016 during the Peyton Manning days.

The Avalanche hasn’t been to the Stanley Cup Finals since they beat the New Jersey Devils in 2001. The good news is, with their championship wins in 1996 and 2001, the Avs are undefeated when they make it to the final series.

*For local viewing options, as there is nothing quite like a Stanley Cup hockey game (especially with Colorado in the finals), TMJ highly recommends McGinty’s Wood Oven Pub in Divide, the Historic Ute Inn,  the Stuft Food Emporium, and Peak View Barbecue  in Woodland Park and Blue Moose Tavern in Green Mountain Falls.

These above-mentioned establishments abound with great big screens and encourage obnoxious and enthusiastic Avs’ fans. You may even run into a member of TMJ News there.

Make sure to get boisterous. Who could possibly support the Rangers or Lightning? If you are one of those demented fans, don’t tell us about it.