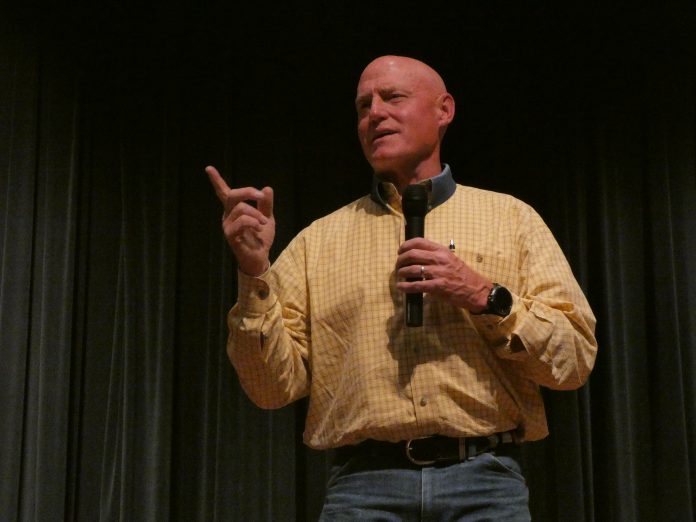 New School Gets the Green Light as RE-2 Charter Institution

After a slight postponement, the Woodland Park RE-2 District Board of Education held a special town hall meeting last Wednesday to get feedback from the community about the possibility of the Merit Academy joining the district as a charter institution.

RE-2 leaders certainly got their wish in the form of considerable input from local residents and parents.

The meeting was postponed from two weeks ago to give more time for the contract to be finalized.  The forum featured a panel of both school district and Merit Academy staff to answer all of the questions coming from the community.

Many of the questions from residents dealt with the contract itself. The RE-2 Director of Business Services Brian Gustafson reminded the crowd that a charter school contract is different than any other type of contract.

Gustafson also said that the district is not responsible by any debt incurred by the Merit Academy. Even when Merit becomes a charter school, the debt will be the responsibility of the charter school’s board to pay.

The board was then asked if they had read the charter application’s denial from the previous school board and if the issues they brought up had been addressed. Board President David Rusterholtz and Vice President David Illingworth II responded  to these concerns.

For one, they said that the situation is different now that the school has been open and operating for a nearly a full school year. They also both stated that the previous board’s issues with Merit not providing school meals or transportation were not required by state law.

The Merit Academy representatives were also questioned about rumors regarding them not having their students take standardized tests. The Merit team responded with test results that proved how many of their children have improved academically over the last year.

When it came time for public comment, the district’s superintendent, Dr. Mathew Neal, dismissed his staff and the Merit Academy representatives from the stage so that only the board members were put in the “hot seat.” The public comment section of the town hall meeting was split with some residents speaking against the board’s actions and others thanking the board for moving quickly with the Merit charter contract.

Dr. Neal started the public comment session by having  members Khurshid Rogers and Caron Smerkonich of the District Accountability Committee take the floor. The two presented several statements from the committee surrounding the charter school contract.

The committee presented half a dozen concerns to the board that they asked be resolved before the board votes to approve the charter contract. “We are most notably concerned that the WPSD board is not providing adequate fiscal oversight or protection to their district schools with their proposed allocation of sales tax revenues,” Rogers said. “The district has the choice to or not to relinquish sales tax revenue, and we believe financial conservativeness is necessary to keep the district fiscally stable.”

Others commented and said that didn’t have a problem with Merit joining the district, but they have had issues with the ways the board has gone about doing it. Some questioned the timing involved with the  posting a special meeting to approve the Merit contract.

Others though, spoke up and said that they were thankful to the board that Merit would soon be a part of the district. One resident said that it was upsetting to hear all sorts of questions about money come up because he thought that when the lives of children are concerned money shouldn’t be the main issue.

The district’s board then held a special meeting the following day on the Merit Academy contract itself. After some discussion, the board voted 3-1 to approve Merit’s charter contract. Board Director Chris Austin was the only member to vote “no” on approving the charter school contract.