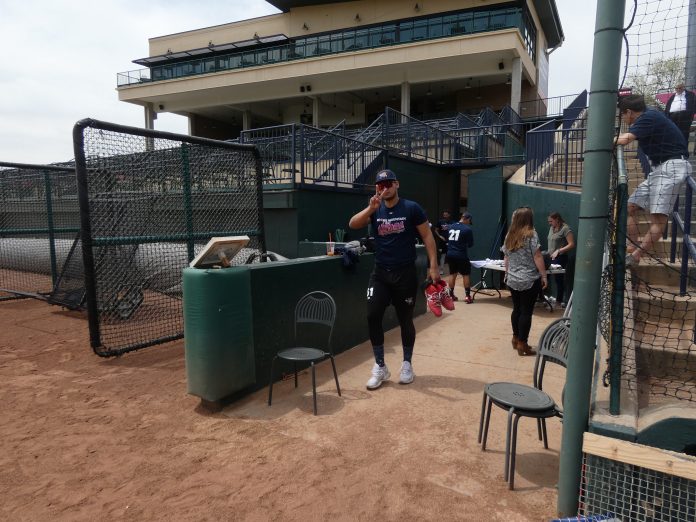 After a long wait, Colorado Springs’ favorite hometown team is back out on the diamond for another year of baseball action. The Vibes’ 2022 season kicked off Monday with a three-game home stand against the new team, the Glacier Range Riders out of Montana. The team plays at home Monday, Tuesday, and Wednesday and then again next Sunday and Monday afternoons.

The Vibes then continue their season on the road against another team new to the Pioneer league this year, the Northern Colorado Owlz from Windsor, CO. The Vibes then return home on June 7 with a six-game home stint against the Idaho Falls Chukars.

According to the team’s director of marketing and sponsorship, Kay Goodell, the season will look quite different this year, but in a good way. The team sports a whole new staff, new coaches and a roster of brand new players with only five returning from last year.

She said that the season  bring about several new additions to their lineup of events this year. The team will also be sporting new “hometown” jerseys for select games this season.

“That’s our goal here is that we want to have a new and exciting atmosphere for everybody,” Goodell said. “We have a new team out on the field, and pretty much everything is new here.”

The season will also look different with their daily specials. The good news for old school baseball fans who remember the Sky Sox days, two dollar Tuesdays has made a return for 2022. This season during every home game that falls on a Tuesday, spectators will have the chance to get two dollar tickets, parking, hot dogs, and beer.

The team will also have other specials during home games on other days of the week. The team’s new staff already seems motivated to give fans a unique season of baseball fun.

Goodell just started with the Vibes in April, but she has been a baseball fan since she was a child. “My dad definitely raised me to be a baseball girl. I was sitting at the baseball fields before I could even walk,” Goodell explained. “I grew up in a ball park and the atmosphere of the ball park was why I wanted to work in sports. My dad works in baseball and my brother is going to school for field and turf management.”

Special 2022 Events for the Vibes

The Vibes’ season will feature 48 home games this year, and some of their favorite specials from last year will be making a return in 2022. The home games on Saturday will still be the stadium’s “theme nights” and fireworks will still take place on home games on Friday nights.

Along with two dollar Tuesdays making a return, the park will now also have “Thirsty Thursdays.” New to this year, the Vibes will offer Salute Sundays during which all active duty military personnel get into the games free of charge.

The team will be holding a special event with fireworks, when they play on the Fourth of July this year, and there will be several other events throughout the season. This season they will also be holding new events such as a “Christmas in July” celebration and a “Colorado Proud Day.”

The season will also have a “Las Lloronas” week where the Vibes celebrate their Hispanic heritage by taking on their alter ego “Las Lloronas” name. During the time the Vibes dress and play as their other name, the stadium will host events like salsa dancing, mariachi bands, and appearances from “La Llorona” herself.

The team will also have themed events like a Marvel comics’ night and a Broncos’ night. On their special “hometown” night on June 10, the Vibes will unleash their new baby blue-colored “The Springs” jerseys to celebrate their hometown which they will wear during certain games throughout the season.

The team also has a new manager that Goodell says is ready to start winning games. “It is going to look a lot different than last year on the field,” the Vibes’ marketing director said. “We have all new management, coaching staff, and several new players. Our hitting coach this season is Francisco Cabrera. If you are from the East Coast or are a big Braves’ fan like me, that is a phenomenal name to see on our roster here. I’m really excited to have him out here.”

The team’s opening day is this Monday with the first pitch starting at 6:30 p.m. Anyone who would like to win tickets to the Vibes’ opening home stand can explain why they are the biggest Rocky Mountain Vibes in an e-mail to Newsofwoodlandpark@gmail.com. There will be more chance to win free tickets throughout the season, stay tuned to MountainJackpot.com.