Town Hall Meeting Scheduled for This Wednesday to Finalize Application

After operating successfully for almost an entire school year, the Merit Academy in Woodland Park held a celebratory event last week outlining their accomplishments, despite experiencing a few earlier setbacks.

This comes as the Merit Academy is  making a major bid to seek a new home by leasing part of the Woodland Park Middle School facility in the RE-2 District. A town hall meeting is scheduled for Wednesday.

Although a fairly new institution, the Merit Academy has had a lively history locally. The school initially applied to be a charter school within the Woodland Park RE-2 school district last year, but the application was denied by the  previous school board.

The Merit Academy team kept trying and they were able to open up last fall as a contract school under the ER BOCES based out of Colorado Springs. The school first opened up at a local church before they were able to lease a building that used to house a hardware store in the Gold Hill South Shopping Center.

But then late last year, new school board members were elected after campaigning to charter Merit into the district to offer more school choice if elected. Once the new board took office, the discussion of adding Merit Academy to the school district took forefront during most meetings.

In fact, a Memorandum of Understanding has been approved by the board to speed up the application process. Last week during an executive session at a special board meeting, the board discussed the charter school contract.

This Wednesday, the school board plans to have a town hall meeting in lieu of their regularly scheduled board meeting to discuss the contract and the possibility of Merit leasing part of the Woodland Park Middle School next year. The new plan is to add Merit Academy as a charter school in the district and lease them part of the middle school since the school is sitting at under 50 percent capacity.

Last Thursday, a parent, board member, and teacher from the Merit Academy made an appearance on the national television news show, Fox and Friends, to talk about how their school has been successful and grown significantly in its first year. The appearance marked the second time Woodland Park’s Merit Academy has received national attention on Fox News.

The first time the school made the news station was to talk about how they designated themselves as a “no politics” school. On their second appearance last week, the show talked about their success and how they could double in size next school year.

Last Thursday, the Merit Academy held a special civic conversation event about the Declaration of Independence by guest speaker Dr. Thomas Krannawitter at the Edgewood Inn in Woodland Park to commemorate its first year as a school. The lecture was aimed at further educating parents and members of the community about the famous document and the philosophies behind it.

According to Merit Board Member Jason Ledlie, the event is the start to a civic conversation series that the school plans to put on for the community possibly once every semester. “Part of the classical education that we will be offering to students sounds a lot like this,” Ledlie said. “So, we also thought that it would be wonderful to offer some of this same philosophy to parents of students who are going to this school without having them in the classrooms eight hours a day. We thought that it would also be wonderful to offer events to the whole community.” 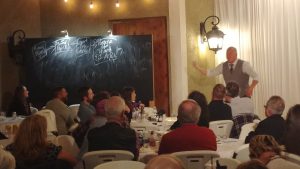 The event’s guest speaker, constitutional scholar and lecturer, Dr. Krannawitter (who will also host the second event next fall) has studied the philosophy of politics for 30 years and he holds four college degrees including a PhD in Political Science from Claremont Graduate University. He has taught at a number of universities including the Colorado Christian University and Hillsdale College and has written several books.

Dr. Krannawitter said that it is vital to educate not only students but their parents as well. “I have realized over the years that parents, adult grown-ups tend not to know much about things like the Declaration of Independence,” the speaker said.

During the event, Dr. Krannawitter spoke about the Declaration of Independence for over two hours. But instead of just reading it, the lecture was focused on dissecting it and describing what the Founding Fathers meant when they wrote the document.