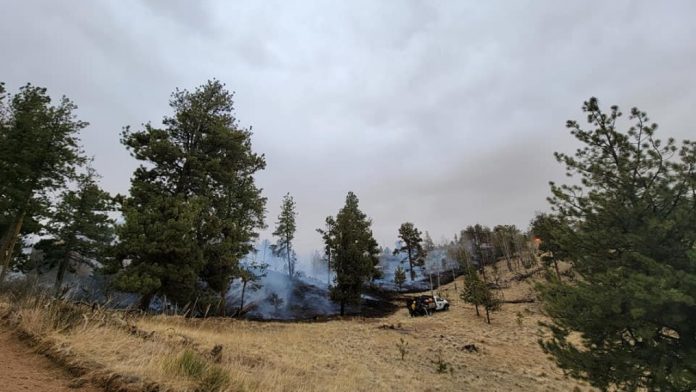 Gunshots and a flurry of fires continued to bombard the Teller High Country, which has received no reprise from an invasion of emergency incidents. The recent barrage of activity has kept residents on the edge, bringing back memories of the Waldo Canyon and Hayman disasters.

Here is a short recap of last week’s spree of significant blazes and serious crimes. For more details, visit us at www.mountainjackpot.com and our Facebook page.

Last week, the Teller County Sheriff’s Office couldn’t seem to catch a break as bizarre crimes tended to keep occurring. At about 12:30 a.m. on April 17, deputies responded to a call in a neighborhood southwest of Florissant saying that a resident was shooting at their neighbor’s houses.

When deputies responded to the residence, they noticed a suspect in the house in question shooting a gun from his home at his neighboring residences. The deputies then notified the county’s Emergency Response Team (ERT) who then showed up to the address at about 1:30 a.m.

The team started by removing 11 residents from their homes using the sheriff’s office’s bulletproof bearcat vehicle. The ERT team transported the residents in the bearcat to the highway where a van transported them to the Florissant Fire Station where they stayed until 7:30 a.m.

After the residents were evacuated, the sheriff’s office reported that the suspect continued to fire shots at other houses in their neighborhood. After a standoff, the deputies eventually entered the home to find the suspect deceased from a self-inflicted gunshot wound.

Upon searching the house, the deputies found several spots in the home that were staged with firearms to shoot bullets at the neighboring houses. No deputies or innocent bystanders were injured during the incident.

Last week, the high winds and dry conditions brought yet another round of terrifying fires to Teller County. The first one came a little too close to the county’s largest city as it was just a few miles southeast of Woodland Park.

At about 6 p.m. last Wednesday, a fire broke out near the Rampart Range Reservoir about four miles from the city. The fire started less than a mile away from some campsites near the reservoir.

By 9 p.m. the fire had grown to about three acres in size. The U.S. Forest Service reported that heavy fuels were burning in the blaze and the glow from it could be seen from a far distance away.

Crews with the forest service and El Paso County stayed on scene and continued to work on containing the wildfire through Wednesday night. By about 1 p.m. Thursday, it was announced that the fire was 100 percent contained at three acres.

Last Friday, it was all over local news stations saying how bad the fire danger conditions were that day. The combination of some of the highest speed winds the area has seen in decades combined with hot, dry conditions made it one of the worst days for fire danger of the year.

In fact, several fires broke out that day including a scary one in Colorado Springs that threatened several structures. In Teller County, officials announced a fire in the Colorado Mountain Estates subdivision south of Florissant just after 5 p.m.

As soon as the blaze ignited, mandatory evacuations were instilled for the entire subdivision. According to Teller County Sheriff’s Deputy Lieutenant Renee Bunting, the fire was started by a fallen power line and it grew to about five acres.

An evacuation center was set up at the Florissant Fire station as several people got displaced. But then at about 8:30 p.m. last Friday, residents were allowed to return to their homes and they had to show their identification to get back into the subdivision.

The fire continued to burn Friday night as the National Weather Service instilled a red flag warning since winds were blowing at 40 mph with gusts up to 61 mph and the humidity was as low as 6%, creating dangerous fire conditions.

On Saturday morning, the sheriff’s office announced that the fire was 50 percent contained. “No active fire or hotspots at this time and we’ll be improving lines throughout the day,” a Teller County Sheriff’s Office social media post reported. “Weather is cool and helping us in mopping up of any hotspots along our perimeter. We don’t anticipate any flare ups at this point but will have command and crews watching until this evening. Still right at about 5 acres and we expect to maintain that today with no spread.”

With all of the fires that ignited around the state last Friday, Teller’s neighboring Park County was not left out of the flurry of blazes. A fire ignited near Tarryall Reservoir and it shocked fire crews with how quickly it spread in such a short period of time.

Just before 5 p.m. last Friday, the Allen Creek Fire was reported about a mile off of County Road 77 in Park County a few miles north of Lake George. According to forest service officials, one Dozier, multiple fire engines, and about 20 crew members responded to the fire that was reported to be about five acres in size.

But then, the fire that was fueled by mixed conifer, timber, and grass grew to about 11 acres in size by 7:45 p.m. that night. Crews had a fire line dug around the fire by the end of shift Friday.

But by Saturday morning, officials reported that there was zero containment on the fire. However, no structures are currently being threatened by the fire even though it did come about a quarter mile away from a building at one point.