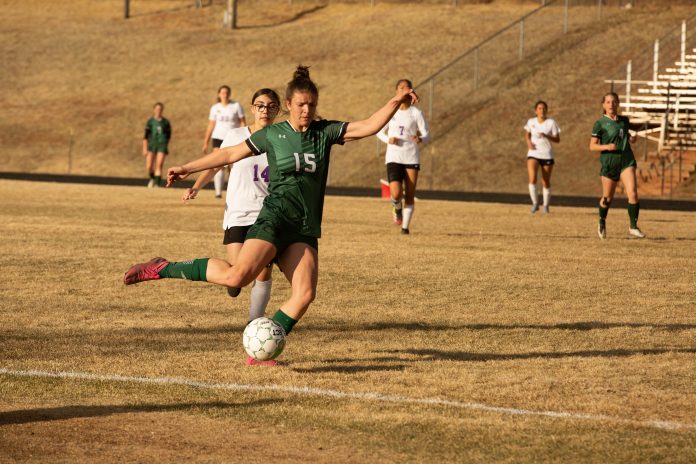 The Woodland Park girls’ soccer team is setting the kicking path to become one of the top sports clubs of 2022.

Without question,  they will earn the bacon for the most improved team in the high school sports arena.

Last week, the Lady Panthers started playing their much anticipated league matches. And, they came out on top during each one. 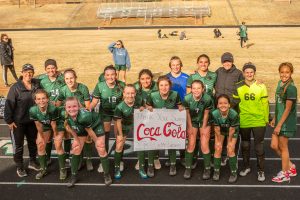 The girls currently have a 7-1 overall record and they are 2-0 when playing in their league. The ladies came out with a big win during their first league game last Wednesday against Coronado 4-3 after defeating Pueblo East 7-0 on Tuesday.

Then last Friday, the girls hosted their first home league game. The stands were packed on a chilly, windy evening to watch the girls shine.

During the first half of the game, scoring was scare as the defenses on both sides looked tough. The Panthers did though keep the ball on their side of the field for most of the half. 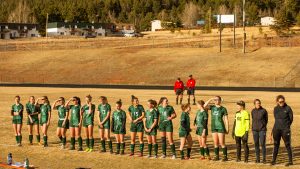 The ladies stayed strong though, and goalie Katie Roy came up with some big saves in the first period. Before the buzzer sounded, the Panthers were able to get one goal to put them on top by one score at halftime.

In the second half, the Panthers let one score go, but they answered two times to make the final score 3-1. Sophomore Hailey Witt picked up one goal and sophomore Emma Vonderharr scored the other two.

In fact, Witt is currently leading the team on scoring with a total of 11 goals. Shealan Waters is the next best with 10 goals and three assists. Senior Morgan Berry also sits behind the other two top scores with nine goals for the season so far. 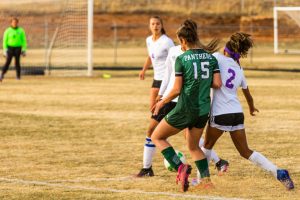 In other good news for the team, junior midfielder Waters signed a letter of intent to play soccer in college before her high school senior year starts. Last Monday, a signing ceremony was held at the high school to watch Waters sign papers to play soccer at the college level at the University of Providence in Great Falls, Montana.

During the ceremony, Waters’ father and three of her previous coaches gave speeches of encouragement to all of the soccer players present. Boys’ soccer coach Andrew Pappadakis was there to support Waters as he coached her when she played club teams when she was younger. The other two coaches present were on club teams she has been playing on since she was four years old.

This week, the tough part of the Lady Panthers’ season continues with two league matches. On Tuesday, the ladies challenge the 4-5 Widefield Gladiators on the road. Then on Thursday, they come back home to play against the 3-4-1 Canon City Tigers.

So far the high school baseball team has seen some struggling to start the season.

Bad luck has struck the team with several games being cancelled.

However, on April 9 the Panthers had their first home game at Meadow Wood Sports Complex in Woodland Park. The boys played in front of full stands, with fans sitting and standing all around the field.

The weather was a bit on the cold side and extremely windy, but the team played tough against Sand Creek. The boys hung in tight in the first part of the game, but then towards the middle of it, they started to slip and allowed Sand Creek to score a few runs to take the lead. In the end, the Panthers lost their first home match by a 9-5 score.

The good news is that the first home game was much closer than most of their other matches. The Panthers are currently 1-7 overall and 0-1 in their league. Many of the losses the team has suffered have been by margins of 10 to 15 runs.

The Panthers did pick up one win this season when they played Mitchell on the road on March 31. The Panthers belted the Marauders 19 to 4.

Despite their big losses, the Panthers do have some great talent on their team. Currently junior Tanner McAfee leads the team while at bat with a 0.615 batting average with two runs and eight hits.

Sophomore Nicholas Schriever sits in a close second when it comes to batting with a 0.529 average three runs nine hits, and six RBIs. Senior Tyler Thime has been the team’s leading scorer with a 0.471 batting average and a total of nine runs. Sophomore Caden Howard and junior Ethan Horton are the only two panthers that have hit homeruns this season with one apiece.

League play continues for the Panthers this week as they take on the 5-8 Mesa Ridge Grizzlies at home on Tuesday and then go on the road Thursday.