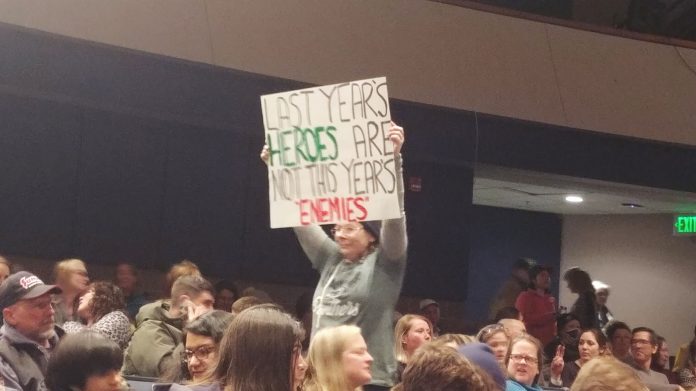 In fact, the crowd of 260-plus people into the high school auditorium most likely shattered previous attendance marks for board meetings,  which in the past would have been lucky to sport a handful of concerned citizens. Those days of political indifference are long gone, in a trend of lively debates capped by a new group of school board leaders.  These types of scenes have prevailed in the entire Pikes Peak region, as school board meetings have turned into verbal battlefields in a slew of districts, including the Woodland Park RE-2 area. 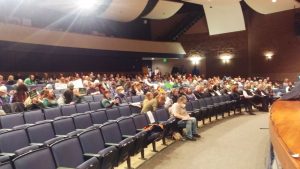 The Woodland Park school board meeting also had a surprising turnout for those interested in giving a public comment. More than 30 people signed up to speak at the meeting and many did not get the chance to take the podium due to the rules that only allow four people to speak about any one topic.

Still, the public comment portion of the meeting took center stage in a marathon session that lasted over five hours. The two main topics during the meetings dealt with recent and somewhat controversial commentary by  board directors Gary Brovetto and David Illingworth II, and the prospects of the Merit Academy using half of the middle school building next year. (see related article)

Recently, emails between board members, obtained through a CORA (Colorado Open Records Act) request, surfaced on local social media pages. “My idea is that chartering Merit should be our immediate priority, but it might be a good move to move the ball forward on some other things,” Illingworth said in an email sent to Board President David Rusterholtz dated Dec. 9, 2021. “This is the flood zone tactic, and the idea is that you advance on many fronts at the same time, then the enemy cannot fortify, defend, effectively counter-attack at any one front. Divide, scatter, conquer. (Former President Donald) Trump was great at this (in) his first 100 days.”

“We Are Not the Enemy”

In response to this email and other related comments, half of the meeting attendees last week carried signs, saying, “We are not the enemy” and “We support our teachers.” Some showed up early and held up signs as people entered the building. 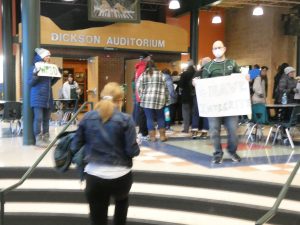 To start the meeting, many of the school board directors made statements defending Brovetto.  The director came under fire after many students and parents alleged that he spoke inappropriately to a high school leadership class.  This criticism against Brovetto surfaced at a previous school board meeting last month.

At last week’s meeting, Brovetto started his opening remarks by saying that his purpose to attend the high school class was to have an open dialogue with the students. He refuted the claims made in the February meeting. Students and concerned parents contended that  Brovetto was supposed to talk to the class about the U.S. Constitution, and then changed the subject, and reportedly offended certain students.

“I am going to clarify what was presented in the media about my meeting with student council on Feb. 8,” Brovetto said. “While many topics were discussed at this first meeting, I had with students, of particular importance was their experience with the Summit Learning System. This is where I (a 30 second comment out of a 40 minute dialogue) expressed my concern with students who have been diagnosed with ADHD or Asperger’s who may have difficulty with the Summit Learning Platform and may find it more advantageous for a more traditional learning platform where they would have more personal interaction with teachers who can help them focus and organize their learning. Let me be clear, my comments were not meant to be demeaning or derogatory towards those afflicted with ADHD or autism or Asperger’s. I feel terrible about the misunderstanding.”

Board Vice President Illingworth then took the floor and defended Brovetto, saying that he believes Brovetto had good intentions and that he was misinterpreted. Illingworth said that a local newspaper did a “smear piece” on Brovetto, and one on himself, over what was stated in the emails.

Illingworth told the crowd that he supports teachers, but that he does not favor unions because money from the teachers in the union is used to support “radical, progressive, democratic politicians.” During his speech, he was interrupted several times by members of the audience, who  shouted out comments against his anti-union stand.

He also talked about some of the emails that were released on social media. “There is a connection between the kicking into overdrive of the public hate machine towards the directors of this board connected to something I sent an email about in January,” Illingworth said. “In January, I discovered that there was a sweetheart deal in place for the Woodland Park Education Association. And I wrote an email to the superintendent expressing my dismay and concern over that deal. Our predecessors on this board, working with a former superintendent, handed the keys to the kingdom to the Woodland Park Education Association free of charge without almost no oversight whatsoever.”

During the public comment portion of the meeting, many spoke out about their support for the district’s staff and their concerns about actions that have recently been made by the board. A common theme was that many teachers and staff members believed they were attacked by Illingworth, especially in his  use of the term “enemy.” 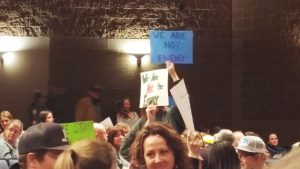 One of the more than 100 signs displayed in the audience, read, “Last year’s heroes are not this year’s enemies.”