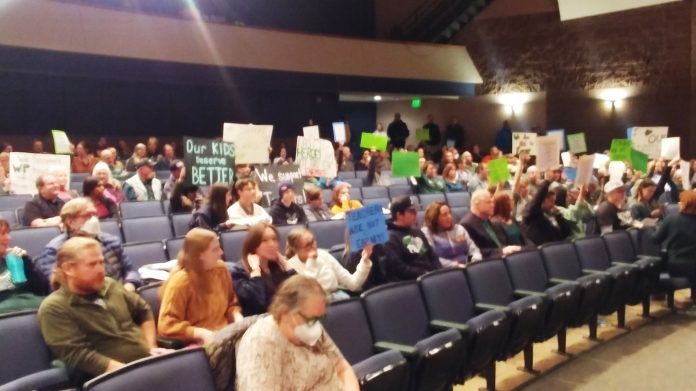 At the emotionally-charged Woodland Park RE-2 District School Board meeting last week, plans for moving the new Merit Academy into the WP Middle School became a major point of discussion.

But since Merit has not yet been officially approved as a charter school within the district, these pursuits are temporarily on hold. However, they do have strong support among certain RE-2 leaders and officials.

In fact, the school district has already started the process to figure out how sharing the middle school with Merit could work. Based on the talks at recent meetings, there is a good chance that the district will follow through with chartering the Merit Academy and giving them the 6th grade wing of the middle school before the end of the current school year.

Recently, a group of “concerned taxpayers” brought up a proposal to the board, saying that the district should move out of Columbine Elementary School and let the new Merit Academy move in there. District officials, though, prefer a different idea, which would give half of the middle school to the new charter school.

But the idea of sharing  RE-2 District facilities has sparked much opposition.

As soon as both ideas were presented, the plans ignited outrage from hundreds of residents. Many argue it is not a good idea to give part of an existing school in the district to a charter school that is in its first year, and has no track record of success. But supporters of the plan, noted that current RE-2 District facilities are not being used to capacity levels.

During last week’s board meeting that shattered attendance records with  260-plus people, the idea of letting the Merit Academy use a portion of the middle school was put on the agenda as a Discussion/Information item called “Merit Academy Application for Facility Usage.”

But during public comment, local parents and staff voiced their concerns that moving Merit Academy into one of the district’s schools would be taking away resources from the children that are currently in the district.

One aspect that was brought up during public comment was the fact that the Merit Academy has already incurred a debt that soars into the six-figure level. As a result, concerns are mounting by some  taxpayers within the district will be stuck with that debt, if they consolidate too much with Merit Academy.

“The schools were not constructed to share, and even if you could correct or construct change where the dollar doesn’t fall on the tax payers, what happens to the lost resources, for example if you take the 6th grade wing of the middle school where do our special needs kids who need wheel chair access to that special space go?” district parent Samantha Kruper Peck said during public comment. “Where do they go for private access to bathrooms that allow them necessities in a modest and respectful setting?  You as a board might be okay taking that away from them, but we as a community are not.”

Many were concerned that combining schools would take away from what the school can offer to its students. “First of all, it impacts the entire 6th-grade wing and really the whole school,” district parent and local business owner Erin O’Connell said. “Everyone has to shift classrooms. It removes a lot of rooms being used for very specialized services. Special ed rooms, counseling rooms, some of our restorative spaces, they will be completely uprooted. Not having those facilities really affect the students.”

Process of Bringing Merit On Board Already Underway

When the item came up on the agenda, the discussion was focused on the steps to take to legally get the Merit Academy into the middle school. According to district officials, the process cannot begin until after the school’s charter application has been approved by the district.

The Merit Academy can then send a letter to the district to ask for the use of a facility. The charter school would then have to apply separately to use one of the school district’s “underutilized” buildings.

If the application processes went through, the district would then have to come up with a plan to share costs for the building. According to District Superintendent Dr. Mathew Neal, it is not legal for a school district to rent or lease a building to a charter school.

The superintendent also addressed the idea of giving Columbine to Merit. “I don’t see an elementary school, maybe as once described, as a good location for Merit,” Dr. Neal said. “Simply because of the high school/middle school components. The only two buildings in the district that could fit the requirements for Merit are the high school or middle school.”

Dr. Neal said that he has previous experience in working out a shared school arrangement when he helped a district in Denver combine three different schools into one building. Overall, he said that sharing a building was usually a better idea than closing down one of the district’s schools.

“Quite frankly the attitude was, I don’t want to displace any of the teachers or students at any of the schools,” the superintendent said. “So, when I looked at some of the other discussions like Columbine, I am not comfortable with closing a school for the sake of a charter school that is only in its second year.”

In the end though, the superintendent did agree that the district has a fiduciary duty to their taxpayers to use the district’s facilities to their maxim