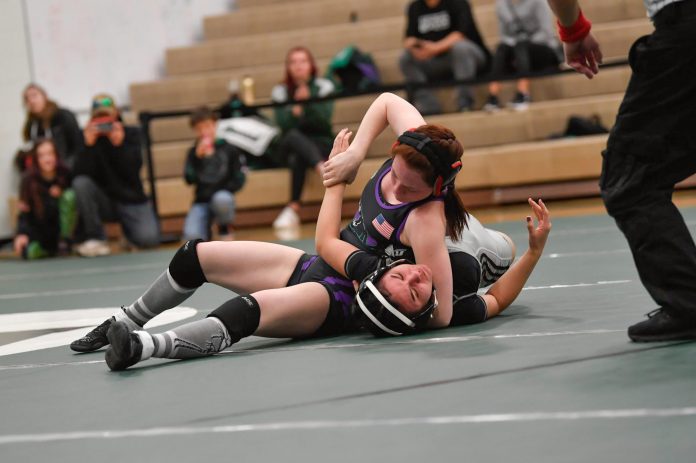 The high school winter sports programs are starting to wrap up, with the clock ticking for possible post-season action.

Most of the sports teams have already played their final regular season matches, and some are awaiting to see if they will find themselves partaking in tournament play.

The high school wrestlers ended their regular season matches at the beginning of the month. Then on Feb. 11, both the girls’ and boys’ wrestlers went to the regional tournament.

On the boys’ wrestling squad, the team qualified their three senior veteran grapplers. “All of our young blood got put out, but all of our seniors made it to state,” boys’ wrestling Coach Casey Hankin said.

This year the team had a high number of freshmen and lower classmen that are still working on learning the sport and becoming competitive. None of the new freshmen class made the cut, but the team was at the state tourney to cheer on seniors Brady Hankin, Adam Garner, and Eli Garner.

In probably the biggest heartbreaker of the state tourney last weekend for Woodland Park fans, Brady Hankin’s bid for a fourth consecutive state title fell short by just a single point. He lost to Fort Lupton sophomore D’mitri Garza-Alarcon in the final match by a 4-3 decision.  The two had faced each other several times this season in the 138-pound  weight class in the 3A division, with Garza-Alarcon getting the upper hand, but not by much.   (For more results of the state tourney, check our Facebook page and complete state tourney details will be published in TMJ’s March 1 issue.)

According to Coach Hankin, Adam Garner was the most impressive wrestling star at regionals as he took home the first place trophy in his weight class. Adam’s brother, Eli Garner, also qualified for state by snagging the third place spot on the podium.

The team’s star wrestler, Brady Hankin (the son of Coach Hankin), has won the first place title in a variety of weight classes for the last three years in a row. If he would have prevailed in the state championship this year, Brady Hankin  would have become one of only about 30 people that have won state in wrestling all four years of their high school career in the history of the sport. Insiders believe that Brady’s opponent in the state and regional finals, Garza-Alarcon, may now gain this distinction within a couple of years.

The final results, though, aren’t too surprising. Hankin has lost a couple matches this year. During the regional tournament, Brady fell into second place, losing to the Fort Lupton sophomore in the final bout. Hankin won all of his matches in the regional and state championships until Saturday’s final duel with Garza-Alarcon. Although this loss was a heartbreaker, especially by such as tight margin, Brady Hankin reigns as Woodland Park’s most successful grappler in years.

For the younger members of the wrestling squad,  the coach said that they need to work hard in the off-season to be competitive next year. “Our guys are coming in at 150 lbs. and up,” the coach said. “And, they are wrestling seniors mostly guys who are very mature physically and mentally and just stronger than them. What they need to do is just hone their skills and strengthen up over the summer so that they come back leaner, fitter, and more mature.”

Diamond has been wrestling for several years as a part of the junior wrestling club and has used her experience to make it to the top. She qualified for state her freshman year and then just barely missed the opportunity last year due to the pandemic.

Diamond has made history being the first WPHS girl to qualify for state and the first to do so twice. Johns has also gone down in the record books as the second female wrestler to make it to state.

Susie Elderbaum was another wrestler that had a chance to make it to the finals. But, according to the girls’ wrestling coach Dustin Rodriguez, Elderbaum had a rough day at regionals and just missed a chance to qualify.

Johns has only been wrestling for close to two years, but Rodriguez said her “above and beyond dedication” has helped her be successful. “She (Arial Johns) is probably the most dedicated wrestler we have,” Rodriguez said. “She takes it amongst herself to get in the gym and work out and eat healthy. She is constantly texting me asking me for tips and to send her videos for different things that can help her when she’s away from the mat.”

Both of the girls, though, had to face off against wrestlers that have beaten them earlier in the season to start off the state championships.