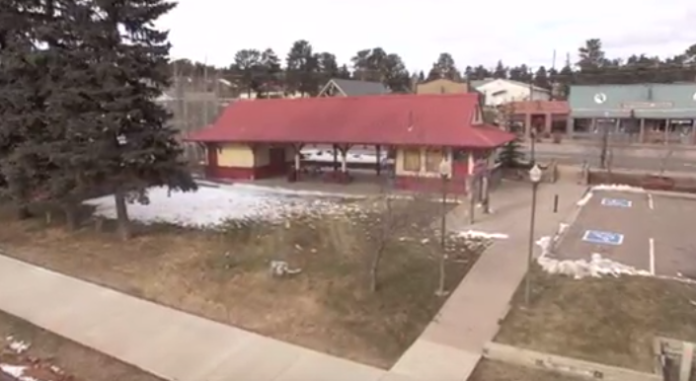 DDA Group Frustrated Over Lack of Progress at Anchor Site

Mike Williams, who has spearheaded several attempts to develop the Woodland Station area in the downtown over the last two years,  came before the Downtown Development Authority (DDA) board last week for an update on his latest proposed project.

As expected, he received a somewhat skeptical review due to the lack of concrete action on the development site,  once considered the future commercial anchor of  Woodland Park. For years, this area was the beacon of the town’s thriving rodeo culture. Since the DDA group assumed control of the land, this area has mostly sat idle.

Williams talked for about 10-minutes giving the board background information on the latest crop of investors he has teamed with in the latest attempt to put some kind of project together on the property.

Williams has been interested in developing Woodland Station for almost two-years now, but has struggled with the right plan and serious investors.

In August 2020, Williams came before the board with an elaborate concept plan for developing Woodland Station. The plan at that time included a 6-plusacre historically themed development, promising good times and special memories for all ages. Its varied offerings would include something for practically everyone with multiple outdoor adventure and discovery activities, year-round entertainment venues inside a Family Entertainment Center, specialty retail, food and beverage service, second floor residences and hospitality housing, an event barn, a designated rodeo area, an amphitheater, and multiple Pikes Peak observation points. A key component was what he called The Rendezvous, which would be an open green space directly behind Bergstrom Park to serve the many colorful festivals and citywide events that already make the various seasons at Woodland Park. Unfortunately, this plan never got off the ground.

When Williams finished his presentation last week, the board questioned him. Al Born, a veteran DDA board member, spoke about the failed attempts in the past by Williams. Born asked Williams if he still had the application for a TIF (Tax Increment Financing) agreement that was given to him in the past. Born stated that the information in the TIF application is the kind of information the board is looking for now with this latest proposal.

Born emphasized the board wants to see something. He described the current lack of action by Williams as just another “wish list.” Williams admitted he has had the application for a long time, but suggested, the changing landscape of investors is why it has not yet been provided this completed application to the board.

Board Member John Gemelke expressed his frustration with how long this process is taking. Gemelke is concerned every time there is a 30-day extension of time, there pops up another 30-day lack of progress.

Board Chairperson, Merry Jo Larsen suggested Williams pull together his team to have a sit-down meeting with the board. Board Member Tony Perry said, “We gave you a 90-day agreement to get your team in front of us. Do you need another 90-day exclusive? You already had 90-days. You already had two and a half years. So do you really need something legal?”

Williams retorted that the “ball was in your court,” and he didn’t receive anything from the board. Perry then stated, “You should be able to give us something that will give us confidence.”

The discussion concluded with an agreement that a meeting between all parties involved should occur to iron out the legal details.

In other DDA news, the board discussed a replacement for DDA lawyer, Paul Benedetti, who was recently fired by the board. The board proposed to submit a series of questions for each of the candidates for the job of DDA attorney

Next the board discussed notification of meetings. The by-laws do not include posting the meetings on the city’s website. This has been a problem for months now.

Since the DDA’s web site was disabled, it was incorporated into the city’s website. However, there are nothing but empty pages where the DDA meeting agenda should be, so citizens would have to physically go to one of the three places where the agenda is posted. Those places are: city hall, the police station, and council chambers.