Who Will Play in the Big Game?

For football fans everywhere, the long-awaited playoff season has finally arrived. For the next few weeks spectators will get to watch the final matches that will decide who plays in the big game on Feb. 13. As of now, 14 teams have qualified for the postseason and this weekend kicks off the first of three rounds that will decide the final two Super Bowl contenders.

When I worked in the casinos, every year my fellow employees and I would have fun filling out playoff brackets in the beginning of the playoff season. It was always funny to see the people who knew nothing about football do better in the brackets then those who watch Sports Center on a daily basis.

So this year, I thought it would be fun to fill out a playoff bracket before the Wild Card games commence just to see how close I get. I will change my picks each week if I am wrong, but this week I am going to present all of my picks from now until the Super Bowl. 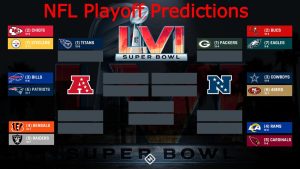 Cincinnati Bengals 34, Las Vegas Raiders 21: The Raiders did look good as they defeated the Chargers last week to earn a Wild Card spot. But the team has been inconsistent this season, and the Bengals just seem like they want it more.

New England Patriots 27, Buffalo Bills 24: I think this will be a close game, but in the end Mac Jones will move his Pats one step further. The Bills just don’t seem to show up and play when it counts and Bill Belichick definitely shines in the postseason.

Tampa Bay Buccaneers 38, Philadelphia Eagles 14: Some have said that Tom Brady could see another year in the big game. One thing that is certain (to me at least), is that the Eagles won’t be the ones to eliminate them.

San Francisco 49ers 37, Dallas Cowboys 34: The Vegas odds put this game as the closest during Wild Card weekend. The 49ers have been looking tough lately and I feel like the Cowboys have been hit or miss all season.

Kansas City Chiefs 38, Pittsburgh Steelers 13: Patrick Mahomes is looking great again towards the end of the season and I think the Chiefs will continue to shine for now at least. Ben Roethlisberger seems like he is already thinking about retirement so I just don’t think he will give the Steelers what they need to pick up the “W.”

Arizona Cardinals 28, Los Angeles Rams 24: After seeing the Rams play against the 49ers last week, I don’t think they have the stamina to stay ahead in a game. The Cardinals played well early in the season but they seemed to have dropped in strength lately. However, I think the Cards will come up with the upset in the end.

Tennessee Titans 39, New England Patriots 31: The Patriots were lucky to make it into postseason when nobody thought they would. But, the Titans are on point this year so they should dominate.

Kansas City Chiefs 42, Cincinnati Bengals 31: I like the Bengals this year, but I think it will take a better team to knock out the Chiefs. Mahomes should have what it takes to see a third AFC Championship game in a row.

Green Bay Packers 37, San Francisco 49ers 24: The 49ers do look like they can win in the postseason, but Aaron Rodgers seems unstoppable this year. I think the Pack will take this one during a cold, frigid game at Lambeau Field.

Tampa Bay Buccaneers 38, Arizona Cardinals 17: The Cardinals just don’t seem like they have the steam to win more than one playoff game. Tom Brady and the Bucs, on the other hand, will need a better team than the Cardinals to eliminate them.

Tennessee Titans 31, Kansas City Chiefs 27: I think the Chiefs will see their demise during their third championship game in a row. It seems as if teams have figured out Mahomes, and the Titans seem to be stellar this year.

Green Bay Packers 45, Tampa Bay Buccaneers 42: Many think Tom Brady will be in the big game again, but I tend to disagree. Aaron Rodgers looks on point this year, and I don’t think he is going to lose. But, don’t expect Tom Brady to go down without a fight.

Green Bay Packers 35, Tennessee Titans 23: In the big game, I think it will go down to a quarterback battle. And since Aaron Rodgers is the more seasoned team skipper, I think he will take home the ring in the end.