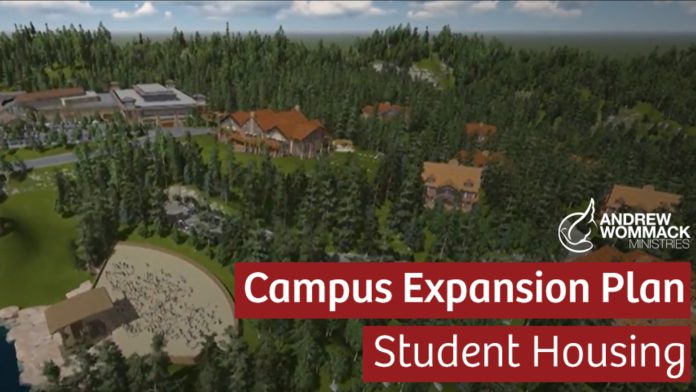 The Woodland Park Planning Commission got a recent glimpse into the future pursuits of Charis Bible College, including the long-awaited plans for student housing.

This  occurred in a workshop, held  with a  presentation by NES Consulting. In an earlier open house last month,  Andrew Wommack, founder of Andrew Wommack Ministries (AWM), outlined their ambitious expansion efforts before community leaders.  A key component of this involves future housing.

Joining the commission for the workshop, held on Dec. 9,  were city council members Robert Zuluaga, Kellie Case and Catherine Nakai.

NES consultants Chris Lever and John Romero gave the power-point presentation which outlined Charis’ future plans. The presentation and content were very similar to the city’s comprehensive plan, which was recently adopted to guide the city through the next decade.

Some of the key points in the draft plan deal with a vision Charis hopes to achieve over the next decade or more. Those points include a strategy to develop the campus, dealing with such issues as student capacity constraints, increased growth, collaboration with the community and regulatory agencies, access for emergency agencies (fire/police), infrastructure, and engaging the community more in  future plans and expansion efforts.

One of the images in the presentation highlighted the location of future student housing. The graphic showed housing on the north side of Trout Creek Road, while some units would get constructed in the center of the campus, and some just north of highway 24, near the entrance to Trout Creek Road.

After the presentation, the floor was opened to questions by the planning commission and council members.

Commissioner Carrol Harvey, who previously served as the city’s mayor pro tem, was first to ask a question.

She asked if there were any plans to privatize the student housing.  When AWM originally proposed their project more than 10 years ago, this idea of a for-profit housing development was initially presented before a previous city council. That plan, though, never materialized.

Romero responded that housing would remain the sole proprietorship of Andrew Wommack Ministries, which means it would still receive the same non-profit tax advantages.

Commissioner Jon DeVaux asked when full build-out would occur. Romero responded that there is no plan right now for full build-out. He did stress there is a strong desire for housing and said, “We’re working on that now.” He mentioned the Planned Unit Development (PUD) for housing on the south side of the campus, which calls for 300 units. This is where AWM would like to  start, according to the NES consultant.

Zuluaga asked about the economic impact the college is having on the city. Romero cited  a study that showed the college has had a positive impact on sales tax revenue to Woodland Park. This point was heavily emphasized during their open house last month in which figures were unveiled indicating the Charis Bible College expansion could generate hundreds of new jobs and an income of $90 million by 2030.

City leaders welcomed the news of more sales tax revenue.  Since AWM is a non-profit entity, Charis College pays no property taxes to the city or county.

All members of the planning commission wanted to get a copy of this study.  The next major step in the regulatory process deals with the city’s okay of Charis’ specific housing plans. No dates have been scheduled for when these hearings will occur.